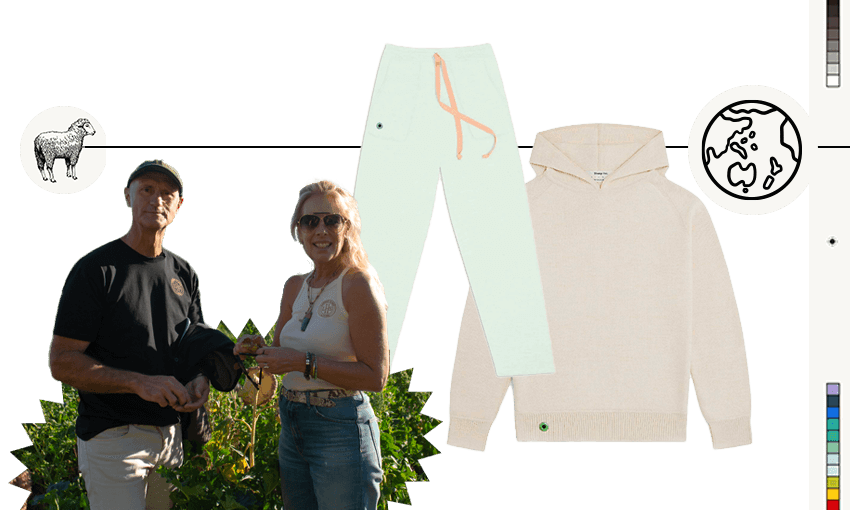 Behind the headline-grabbing Vivaldi, white paint and drop-chute mattresses is an ambitious plan to take high grade, carbon-negative merino wool to the world.

Think of sheep’s wool, and there’s a good chance you imagine a scratchy patchwork quilt, a hand-knitted scarf or a tight fitting Icebreaker. It’s probably fair to say that sheep’s wool is unlikely to bring to mind Vogue Magazine, carbon-negative supply chains or a grey-bearded Tom Hardy.

Edzard van der Wyck, the co-founder of Sheep Inc, the UK knitwear brand that supplied Hardy’s jersey – or “jumper” in Brit-speak – is looking to change that. Launched in October 2019, his company claims to be the world’s first carbon-negative fashion brand.

According to the World Bank, our wardrobes are responsible for 10% of annual global carbon emissions – more than all international flights and maritime shipping combined. What’s more, if the fashion industry maintains its current trajectory, emissions are expected to rise more than 50% by 2030.

Van der Wyck became all too aware of the industry’s dark side at an online fashion outlet he founded prior to Sheep Inc. “I really had to operate within the industry to realise how bad it was,” he says. When it came time to found Sheep Inc, he and business partner Michael Wessely decided to start from scratch, focusing on sustainability and transparency in all areas of their business.

The most fundamental problem they saw was that manufacturers typically have very little understanding of where their products actually come from, meaning even if they wanted to source sustainably, they wouldn’t know where to start. A 2021 KPMG survey found that of the more than 200 clothing industry executives questioned, less than 20% said they had full visibility across their supply chain.

In looking for the right material for their business, merino wool quickly became the number one contender. “It’s a good technical material, it’s very soft, it doesn’t itch and it doesn’t need to be washed as regularly so it has a long lifecycle,” van der Wyck says.

“The only problem is that sheep produce methane.”

That’s a big problem. On the hunt for a solution, van der Wyck rang up the New Zealand Merino Company and asked to talk with their most sustainable merino farms. They put him in touch with Omarama, Middlehurst and Lake Hāwea Stations, his current suppliers.

Serial entrepreneurs Geoff and Justine Ross – the couple behind 42 Below vodka, Ecoya candles and Trilogy skincare – bought the 6,500-hectare Lake Hāwea Station near Wānaka in 2019, with the aim of using their business know-how to make the station the vanguard of woolly innovation.

The couple hit the headlines last week when a Country Calendar episode on their unconventional farming practices attracted a huge response on social media. Or to put it more bluntly, it made farmers the length and breadth of the country very mad.

So what exactly are the Rosses trying to achieve? Wool production at Lake Hāwea Station is special, Geoff Ross says, because of what he calls his “three platforms”. First, the farm is carbon negative – it removes more carbon from the atmosphere than it emits. That’s quite an accomplishment for a station that runs 10,000 merino sheep and a couple of hundred Angus beef cattle. They’ve achieved it through a variety of methods, primarily through planting trees – a lot of them. So far they’ve planted 16,000 native trees, “and that’s just the beginning,” says Ross. Their goal is to plan a total of 100,000 – 10,000 a year for 10 years.

According to Ross’s calculations, the trees and reforesting gullies they’ve already established sequester over twice as much as the 2,500 tonnes of greenhouse gas the farm emits per year, 78% of which is methane produced by livestock. As with their tree-planting goal, their carbon sequestration goal is ambitious: 10 times what they emit.

The second “platform” is a focus on regenerative farming, in particular pastoral biodiversity. Some of the Rosses’ pastures have as many as 30 different seed types, each with a different role to play in promoting the biodiversity of the land. A greater variety of plant life attracts a greater variety of birds and insects, ultimately enriching the soil and improving the overall quality of the farm and its livestock.

Lastly, the station has been making impressive inroads in animal welfare. One example of this are its efforts to shake up the shearing model, the focus of that controversial Country Calendar episode. The Rosses’ relatively minor alterations – painting sheds white, playing classical music and cushioning a sheep’s fall down the drop chute – were what grabbed the headlines, but it’s a change in the way their shearers get paid that could be truly transformational. Rather than the typical per-sheep model, shearers at Lake Hāwea are rewarded according to a metric that considers how sheep are treated at traditionally high-stress points along the shearing journey. The aim is to promote the welfare of the sheep while making it easier on the shearers too.

This is all exactly what Sheep Inc’s van der Wyck was after.

From the South Island of New Zealand, the Lake Hāwea purebred merino wool travels to Italy to be spun before heading to a solar-powered and family-run factory in Portugal, where it’s made into a variety of colourful designer clothes.

Each item of clothing comes with a “connected dot”, an NFC-enabled tag that allows the buyer to trace their particular garment all the way back to where it came from in New Zealand. A scan tells you the CO2 impact of your hoodie, t-shirt or beanie – a net negative, thanks to their carbon sequestration and supply chain initiatives. You can even connect to a sheep on the farm, which you’re welcome to name and keep track of.

Van der Wyck says the connected dot was important to include because it makes the fiendishly complicated issue of carbon calculations easy for their customers to understand. And what about the opportunity to meet your sheep? Fashion is an inherently “emotional industry”, van der Wyck says, and the feature allows for a deeper “connection with the product”. It attaches the consumers to the history of their clothing.

Asked whether Sheep Inc will be in a position to source wool from somewhere closer to the UK in the coming years, both van der Wyck and Ross say it isn’t likely. There are particular features of New Zealand’s environment that suit negative-carbon farming, Ross says, and the dry climate and high altitude of the Southern Alps one of the best places in the world to farm merino sheep. The region is also excellent for growing trees, making the carbon sequestering process relatively uncomplicated.

As he fills up the car for a Matariki weekend outing, a snow-capped Mount Maude and the pristine Lake Hāwea behind him, Geoff Ross says he ought to stop rambling and get off the phone – his family are looking at him funny. A week before he and his wife find themselves at the centre of the biggest (and some say silliest) media story of the day, he has one last thing he wants to tell me: “The Lake Hāwea Station, New Zealand Merino and Sheep Inc model is the way forward for New Zealand agriculture.”

For more stories like this in your inbox every Tuesday, subscribe to our new business newsletter Stocktake.