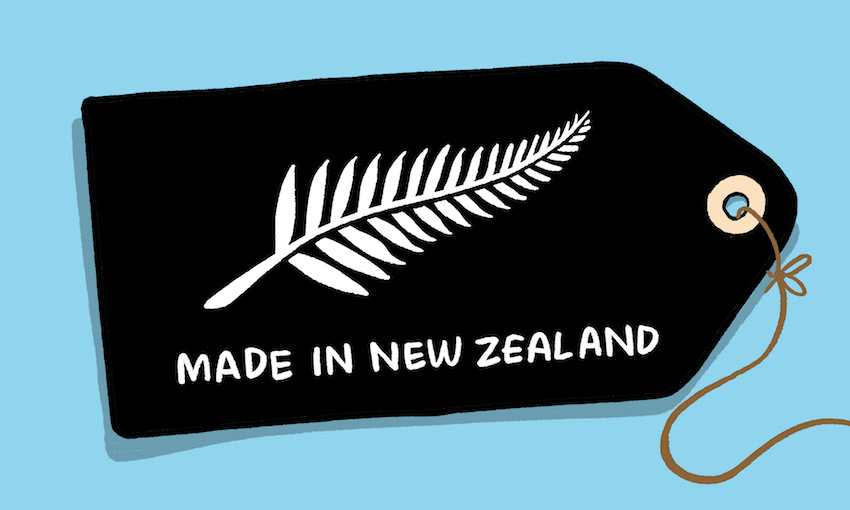 Kiwi AS? The rules for claiming Made in New Zealand

Made in New Zealand. Four words that attract a premium price. But who says what’s Kiwi made and what’s not?

Following today’s revelation that WORLD sells clothing manufactured offshore with cardboard swing tags that state “FABRIQUE EN NOUVELLE-ZELANDE” (translation: Made in New Zealand) we started to wonder – what are the laws and rules which control what is considered Kiwi made?

And can an AS Colour t-shirt manufactured in Bangladesh with a sequin patch made in China (or Hong Kong) married together in New Zealand be called made in New Zealand?

You’d think so eh! The Fair Trading Act of 1986 has a special section on false representations, and in there it says it’s illegal to “make a false or misleading representation concerning the place of origin of goods or services”.

Overseeing that legislation is the Commerce Commission. The rub in the law comes down to this: if a company makes a country of origin claim like ‘Made in New Zealand’ whether or not it is a breach of the Fair Trading Act is “based on whether such a claim is likely to be misleading to New Zealand consumers”.

So what if most of a thing is made in NZ but some bits come from offshore?

The Commerce Commission gives some basic advice on how to tell if a label is likely to be misleading. If “important components” are imported or if part of the manufacturing process is undertaken offshore, then a ‘New Zealand made’ claim risks breaching the act.

However, depending on the product or the nature of the manufacturing process some such products may be legitimately described as ‘Made in New Zealand’.

But here’s a few quick questions to check whether an item can claim to be made in NZ, or not:

For a clothing item, where is it actually changed from a fabric into a garment?

For a food item, where is the essential character of the food created?

Basically, if you are going to sell something that uses bits from offshore and bobs from NZ, you would be better off using explicit terms or phrases such as ‘assembled’, ‘packaged’ or ‘blended’ or ‘designed or assembled in New Zealand from imported components’, the commission says.

And in this case?

Well, it’s too early to pre-judge what may happen with WORLD (we understand a number of complaints have been laid with the Commerce Commission and we’ve asked for comment).

But Anna Heyward, acting executive director of Buy New Zealand Made (which oversees licensing and administers the “Kiwi” Made in New Zealand trademark), says she personally thinks WORLD’s tags are a misleading country of origin claim – and many other consumers would too. “A claim in another language doesn’t change the claim that’s being made.”

The rules around country of origin labelling are even more specific. The Consumer Information Standard (Country of Origin (Clothing and Footwear) Labelling) Regulations 1992 created a consumer information standard which makes it mandatory for all new clothing or footwear supplied in New Zealand to be labelled with information that clearly states the country where the items were made or produced – and it has to be displayed where you can easily see it.

“The label must be a permanent label which the buyer can see when examining the clothing. In the commission’s view origin labels in side seams of garments are unlikely to meet this legal requirement. Origin labels should be clearly positioned in the neck area of the garments,” the Commerce Commission says.

Hayward points out that the WORLD t-shirt itself is the major component for sale, and “it wasn’t turned into a garment in New Zealand”. But if you’re thirsty to learn more, here’s a guide to country of origin labelling.

But why is it such a big deal?

A lot of us like to buy New Zealand made when we can, because it feels good to support local industries and manufacturers who employ Kiwis. And as the Commerce Commission also notes, when deciding to purchase goods, customers will often be influenced by the origin of those goods. “They may prefer to buy New Zealand made products or believe that goods made in certain countries are preferable to others.”

If you get busted breaking the rules what happens?

Other fines for misleading country of origin claims have amounted to tens of thousands in fines, including a case where a company misleadingly labelling Chinese-made wool duvets as Kiwi cost the company about $100,000.