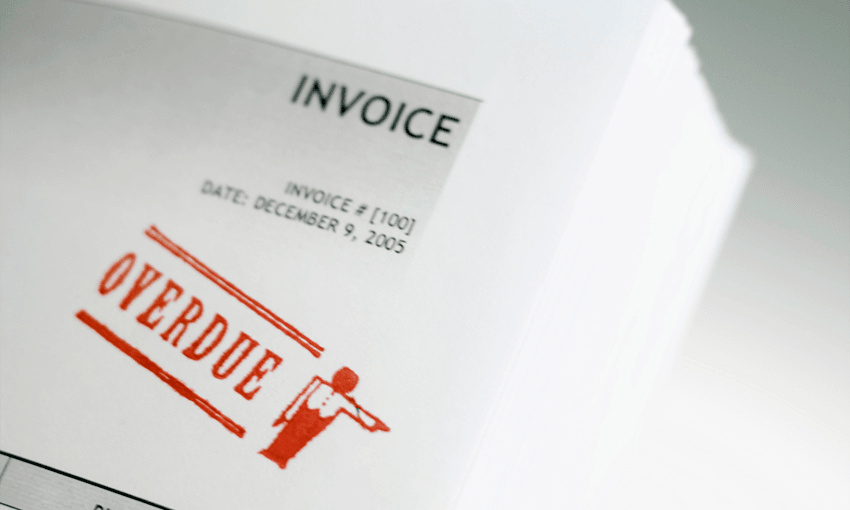 When Xero mined its data, it found only about one in nine invoices were paid on time.

Getting paid is hard to do: Why being a small business owner in New Zealand sucks

When Xero mined its data, it found only about one in nine invoices were paid on time.

Dairy co-operative Fonterra’s decision in 2016 to delay paying some suppliers for three months prompted a wave of anger. But as David Cormack found out, this practice permeates many industries – and is a serious stress point for small business.

It’s a line that gets trotted out by politicians a lot. The line is that “small businesses are the backbone of the economy,” and having now been a small business owner for just under two years I can tell you that this country is pretty shit at looking after its backbone.

I can remember reading a statistic when my business partner Lou and I set up our PR firm. It said 96% of small businesses fail in the first two years. Ninety-six. That’s a lot. That means just one out of 25 businesses manage to get through their first two years (MBIE data shows failure rate per company based on the number of employees). And while the biggest killer of small businesses anecdotally is provisional tax (that ridiculous system where you end up paying year two’s taxes before you’ve even paid year one’s), the most soul-destroying part of being a small business owner is learning how much big business loves to trample over small business with impunity.

Last year, there was another news item about how Fonterra pays its suppliers on a 60-day cycle, while cloud accounting firm Xero mined its data and found only about one in nine invoices were paid on time. Sounds bad to wait for 60 days to get paid, doesn’t it? But sometimes it’s even worse. Sometimes it’s 90 to 120 days. That means if you’re a supplier for Fonterra, and you do work for them, then you could wait up to four months for your money. What kind of uber-capitalist hell is that?

The news article also said Fonterra offered loans to suppliers to tide them over. “Oh no,” said Fonterra, “we don’t do that.” Fonterra merely hooked those suppliers up with a third-party company that offer loans, and of course, that third party charges a fee. Now the suggestion is that you can do work, get paid on time, but only if you pay for the pleasure? As a small two-person business, we would die in a month if all our clients treated us like that. This “backbone” would be smashed, leaving a crumpled mess on the floor.

I’ve been told that McKinsey, a global management consulting firm, has been visiting larger New Zealand organisations and helping them “improve efficiencies” which means ways to save money. But they never recommend the easiest way to save money which is to reduce dividends to shareholders and focus the money on the people actually doing the work. McKinsey has reportedly been recommending this 60-120 day billing cycle as a means of effectively having a line of credit from small businesses, and this money can be kept, held and used to make more money. Meanwhile the “backbone of the economy” shrinks, and the country starts looking like the hunchback of Notre Dame.

We had a client who told us exactly this: because we’re a small business and they were a large business, we didn’t have any power to tell them to get bent. And that’s the rub, isn’t it? Fans of the invisible hand will say the market will sort this out and suppliers will have the choice to not work for companies who pay in shitty 60-120 day cycles. Except we don’t have that sort of leverage. If a Fonterra offers us work then we take it because 96% of small businesses fold within two years and we need the cash-flow just to keep our heads above water.

The other part of running a small business that has really surprised me is the number of people who just don’t pay, either on time or at all. We have contracts with all our clients, we stipulate they must pay us on a certain day, and often when that day rolls around, a number won’t have paid us. I never for a second expected that a large portion of my time as a business owner would be as a debt collector. Having to make awkward phone-calls to people, coughing between words as I ask for our money to be paid because we have mortgage payments about to go out or my cat needs its teeth pulled at the vet. I don’t walk into a supermarket, fill up my trolley and just walk out the door yelling vague promises of paying at a later date. Being a supplier shouldn’t be any different. And yet it is.

The ones that really put your business at risk are the ones who don’t pay at all. Ever. The ones that (for any number of business reasons) go belly up, with you as an outstanding creditor. This has happened to us more than once over the past year, and the amount of money that we’ve lost is in the high five figures, which as a two-person business puts you pretty close to the breadline.

When a business signs a contract with you and you do the work, then ask for the payment for the goods or service you provided, you’d expect to get that money. But if a company goes awry somehow, you, as a supplier, are quite far down the list of people who can expect to get some money if a liquidator gets called in. So a domino effect happens. One company topples and the ensuing fall-out takes out other companies too. Once again the “backbone” is smacked around.

You start looking at some pretty bleak Christmas presents for people when this happens to you. A few months ago we were looking at expanding and hiring people. We’d be job creators! But now we’re looking at whether we’ll even have enough just for us.

If small businesses truly are the backbone of our country, then maybe the larger ones who us littlies depend on need to stop treating us like shit. Last year in the UK, new legislation was introduced that forces corporates to report how long they take to pay invoices, and if they don’t it’s a criminal offence. Maybe there needs to be regulation in place in New Zealand so that people are the priority, not the shareholders. Because people are the ones doing the work. People are the ones creating the value. If they don’t get a fair pay while shareholders get a nice healthy dividend, we’ll find that we no longer have a backbone. We’ll have a skeleton sponsored by Nestle, Facebook, or Google.

David Cormack is managing partner at Draper Cormack Group and is a former communications and policy director for the Green Party. He blogs at The Ruminator.

Documents released to The Spinoff show TVNZ already knew it hadn’t conducted proper reference checks when it announced an internal review into his recruitment.
By Stewart Sowman-Lund
Live updates editor
Aotearoa continues to adapt to a new reality and The Spinoff is right there, sorting fact from fiction to bring you the latest updates and biggest stories. Help us continue this coverage, and so much more, by supporting The Spinoff Members.Madeleine Chapman, EditorJoin Members