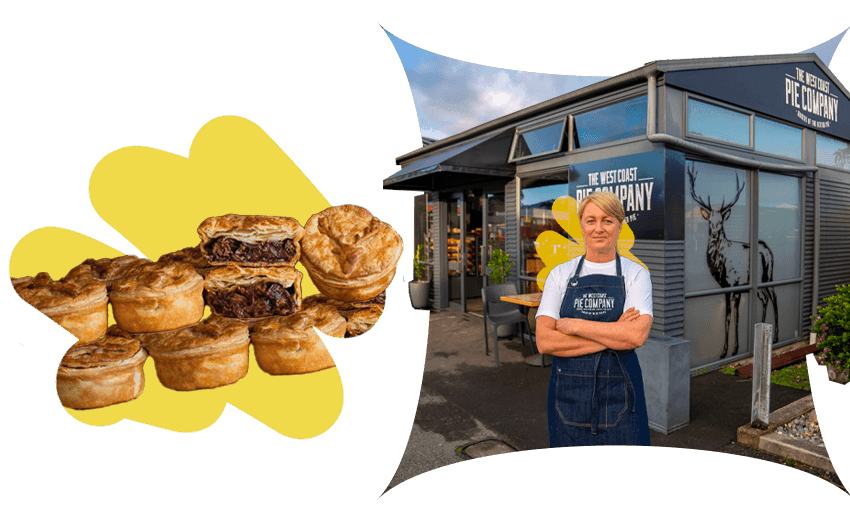 Is there anything Westport’s pie lady won’t put in a pie?

She mixes wild nanny goat with aromatic spices and hare with mushrooms and mustard. Next, Emily Lucas wants to bake wallaby into her buttery pastry.

It’s well past lunchtime and my stomach is empty, which is absolutely the wrong time to talk to Emily Lucas. “I actually just ate a pie,” boasts Westport’s pie lady, as she’s nicknamed in the West Coast town. Lucas bakes thousands of them each week using hunted wild game, which are then shipped them to hungry punters around the country.

She refused to eat it out of a paper bag, or smother it in tomato sauce. Instead, Lucas placed her lunch on a dinner plate and ate it slowly using a knife and fork. “I like to … really enjoy it,” she says. The result? “It’s pretty tasty.”

No sauce? Is she crazy? Nope, just a firm believer that everything a pie consumer needs should be included in the product. Lucas sees the lunch staple as something that deserves to be elevated beyond a $3-at-the-dairy-with-a-squirt-of-Watties experience.

“I think they’re this amazing little package that you can put anything inside of,” she says. “It’s time the pie got elevated into a premium product for people to enjoy.”

So that’s what she’s doing. For the past two years, Lucas has been concocting all kinds of wild and wonderful flavour combinations from her Westport business West Coast Pie Co. You won’t find steak and cheese or bacon and egg pies on Lucas’s menu, because that’s not what she does.

Her pies are different, full of meaty fillings made out of hunted South Island wild game.

“Apart from our venison range, probably our biggest seller is our honey and mānuka-smoked wild pork,” she says. To make it, pork belly is slow cooked then mixed with pork shoulder that’s smoked over a charcoal fire for eight hours. “That’s a complex, really tasty little pie,” she says.

That’s not all. She mixes wild nanny goat with 12 secret herbs and spices – “We went one up on The Colonel,” she jokes. Hare is seared with mushroom and mustard, and rabbit with leak and cider. Right now, her biggest seller is a pāua pie using seafood from the Chatham Islands and flavoured with lemon, parsley and cream. Soon, she’ll add a pie using meat from tahr, a mountain goat-like animal that threatens native alpine ecosystems at the bottom of the South Island, to her range.

But there’s one pie that’s elusive, a flavour combination she can’t quite nail. “We’re going to try a wallaby pie soon,” she says about the Australian native pest, which breeds in the wild in some parts of Aotearoa.

What does it taste like? “I can’t describe it,” she says, but it’s her and her eight-strong team’s winter mission to make it work. “We thought we’d get that done for rugby season.”

Lucas has always had a thing for pies. “I’ve always been a little bit obsessed with them,” she says. When Covid arrived and lockdowns began, the former wedding caterer went all in, sourcing meat from Blenheim’s Premium Game, which has hunters stationed around the South Island. Using their products, she got creative.

It seems to have struck a chord. Over lockdowns, with cafes shut and food sources and shortages becoming a hot topic of conversation, Lucas quickly found plenty of fans. “We get messages from people all over the show … from the top of the country right down to the bottom.”

What are they saying? “I just had an email from an 80-year-old woman in Kerikeri who was just so thrilled to find our wild meat pies. She loves eating wild meat.”

At a time when awareness around the role meat plays in climate change is at an all-time high, as plant-based meat brands and vegan and vegetarianism lifestyle trends continue to grow, Lucas’s meaty business in some ways flies against all those trends.

Ask her why and she has a sound explanation. “People say the future’s vegetarian or plant-based and we need to stop eating meat,” she ays. “We completely disagree with that. The wild meat narrative is completely ignored in all of these discussions.”

Lucas argues her products are sustainable, organic, and prolific. “You can eat as much wild meat as you want,” she says. “In New Zealand we have pretty much unlimited amounts of it … we don’t have to rely on farmed lamb, beef, chicken and pork. There are so many other options out there.”

What she doesn’t have is unlimited amounts of room to make her pies. Lucas is trying to expand to keep up with demand, hiring more staff and expanding her plant to be able to bake more of them. She hopes to be exporting within the next two years, but, right now, turns down most offers. “We are saying no to a lot of inquiries because we just don’t have the capacity.”

The only way to get them is from her Westport cafe, or online, where they’re sold through Premium Game’s website in four-packs. At $10 each, they cost you a lot more than a petrol station pie, but Lucas believes they’re worth it. She should know – she just ate one. “Our pies are quite substantial,” she says. “You only need one, that’s for sure.”