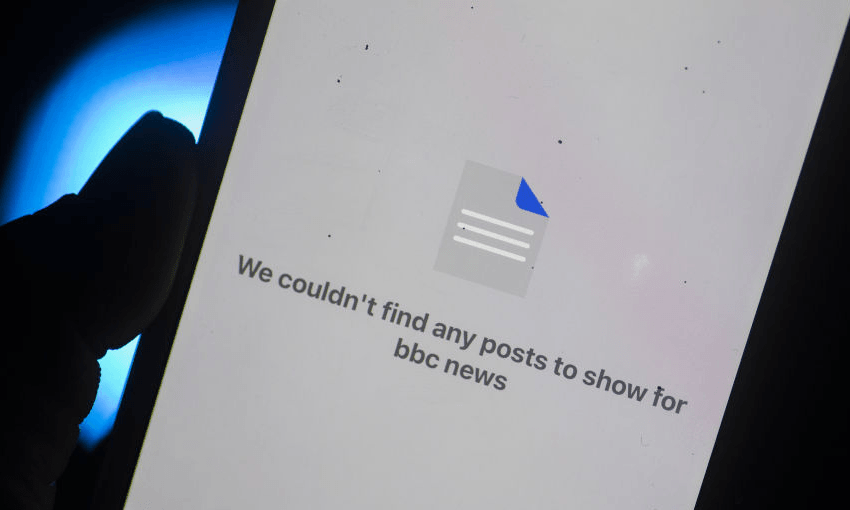 Facebook is running an uncontrolled news experiment on a whole country. Let’s hope it doesn’t work out

The Australian legislation is crumby, but the response from Zuckerberg, in contrast to the Google approach, presents all sort of hazards, including to New Zealand, writes Hal Crawford.

The widely anticipated yet almost unthinkable happened yesterday when Facebook banned all news links on its social network in Australia. At the same time, Google has been frantically making deals that will see it hand at least $100m a year to news organisations for several years. The motivation in both cases is a law about to pass in the Australian parliament that forces payment deals between digital platforms and news outlets. The result will be both devastation of Australia’s smaller online news publishers and the establishment of a global racket that sees the world’s largest search engine passing money to news organisations to avoid trouble. In Facebook’s case, the banning of news in a single market also serves as an experiment that could lead to the world’s social network verifying its belief that news doesn’t matter commercially.

I have been writing about the Australian News Bargaining Code for much of the past year. It is legislation cleverly concocted by Australia’s competition regulator to rectify a bargaining imbalance between Facebook and Google on one hand and news publishers on the other. The argument for the code rests on the idea that the platforms are diddling news media out of money by not paying them for linking to stories. Despite the undoubted dominance of Google and Facebook in online advertising, it is not a good argument, and despite the cleverness of the code, it is not good law. The digital platforms targeted, which are not specifically mentioned in the legislation but determined by the Australian government on the fly, have now taken very different paths to combat what they see as a serious global threat.

Those paths are dictated by the business models and temperaments of both companies. Google, after making a forceful case against the code and threatening to pull out of search altogether in the Australian market, has decided that the “least bad” route is to pay off news companies and avoid being subject to the code altogether. Facebook has avoided the code by doing something Google practically could not, banning news links altogether. Now when an Australian user tries to cut and paste a news article into the social network they are met with a “computer says no” style pop-up.

The implications for New Zealand are big: there will be money to be had for news companies from Google, but only if the government chooses to go down the standover route. The money could be significant. If that happens, Facebook will pull out of news in New Zealand just as it has in Australia and there will be a corresponding hit on social-reliant media businesses. This is a situation that favours bigger, established news companies with more to gain from Google and less to lose from Facebook. Expect pressure to come on the Beehive from those quarters.

The Australian news ban is an uncontrolled experiment for Facebook. Mark Zuckerberg’s company has said that news doesn’t matter commercially. News, he’s said, “is not a significant source of revenue for us”. News companies and the Australian government have argued that there is great indirect value in the presence alone of news. Now Facebook will be able to quantify this X-factor, and news consumers all around the world had better hope it comes in at more than nothing.

An important commentary on the potential financial damage to Facebook comes straight from the advertising horse’s mouth: agency PhD has told its clients that “the Facebook news feed now skews more to user-generated content without journalistic standards from trusted sources … the value of the platform [Facebook] is diminished in the short term.” For Facebook’s sales team, these carefully chosen words will cause alarm.

Listen to Duncan Greive’s podcast explainer on the Facebook decision, and subscribe to The Fold via Apple Podcasts, Spotify or your favourite podcast provider.

No news for you

Australian reaction has been immediate and intense. While the major parties are condemning Facebook’s move, the reaction from smaller affected publishers has been more ambivalent. There could be an element of simple shock in this. The number of publishers affected and the volume of traffic involved is staggering: Facebook says it sent 5.1 billion referrals to Australian publishers last year. That’s all gone now, and scores of small online outfits may have to close. Jobs will be lost, something that has not yet been widely contemplated in Australia.

An initial screw-up in the implementation of the ban saw non-news information sites such as the Bureau of Meteorology and various state emergency services knocked off Facebook. Because this was a mistake and has been rectified, it is not important. But some less “newsy” publishers – for example, lifestyle and parody sites – have been purposely included in the ban and this is a big deal.

“As the law does not provide clear guidance on the definition of news content, we have taken a broad definition in order to respect the law as drafted,” Facebook said in a statement.

Google has set up payment deals with the big Australian news media: SevenWest, Nine, and News Corp. It has also done deals with plenty of others and is expected to announce agreements with public broadcasters the ABC and SBS. Following a masterful intervention from Microsoft it went from irate defiance to a situation where it has agreed to pay “crazy money” (anonymous industry opinion) in the space of days. Doing deals outside the code, which is permitted and even encouraged, allows Google to avoid setting the globally damaging precedent of paying for search links. It also allows it to stay in the Australian search market and not have to give up more than $4bn of search revenue to Microsoft’s Bing search engine. The payoff is the “third way” for Google, but it’s ugly. The world’s media have been watching, and they will be lining up with their hands out. There is little value exchange here, unless you count “not getting beaten up” as legitimate compensation.

What all this means for New Zealand will depend on the government, the news media, and timing. The Ardern government so far has shown little appetite for the sort of cunning legislation being enacted in Australia. That could change if significant pressure comes to bear from media companies, and it matters when that happens. If New Zealand is second-in-line – a domino in Google and Facebook eyes – then it will assume outsize importance and consequently the risks and rewards will be greater. The drama is far from over.

See also: A note for readers of The Spinoff in Australia