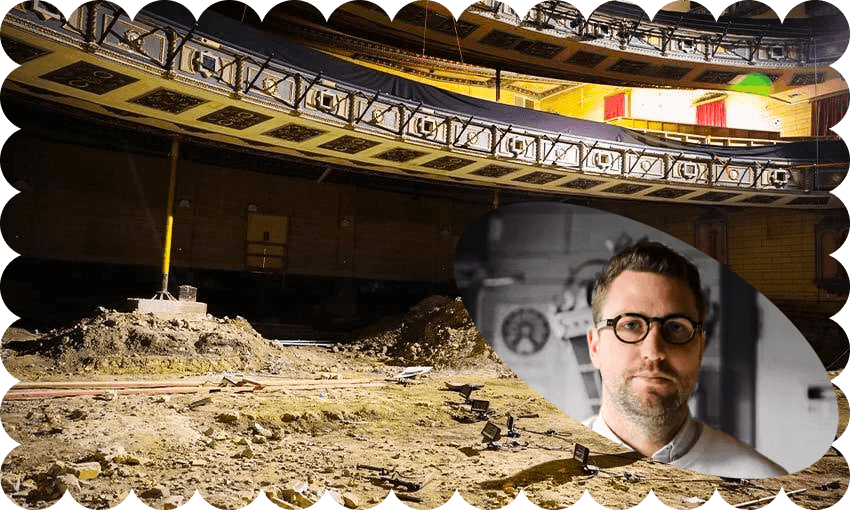 ‘They were there for days’: The St James’s owner has one last plan to fix the break-ins

Steve Bielby is attempting to launch one final plan to save the mothballed Auckland theatre repeatedly targeted by vandals and ‘professional’ thieves.

They cut the power. They disabled the security system. They took irreplaceable artefacts, including a 94-year-old bronze statue. They stripped thousands of dollars worth of copper from the building. “They even fitted their own padlock to the gate,” says Steve Bielby, the owner of Auckland’s historic but mothballed St James Theatre, who believes a recent robbery was the work of professionals. “They were there for a few days and had trade skills to be able to do what they did.”

Over the past six months, Bielby’s seen graffiti and vandalism escalate at his mothballed inner-city venue, a much-loved theatre that has hosted the likes of Kanye West, Coldplay and Her Majesty the Queen since it opened in 1928. The venue hasn’t been used since 2016, and it needs millions of dollars of restoration work – a plan that has been tied intricately to a proposed neighbouring apartment tower providing toilets, offices, disabled access and other amenities. It was all set to go in 2017, with most of the apartments sold, when a bank pulled funding.

Right now, the St James is a dead zone in the city centre of Tāmaki Makaurau. The Queen Street-facing wall, the one covered in scaffolding, is smothered by an impressive array of street art. The gates are locked but if you know how, it’s easy to get yourself over that and into the compound where the apartments are slated to go. “Once things are tagged they seem to become a magnet for other taggers,” says Bielby. Lately, the building’s become a magnet for other things too.

Bielby knows of four separate break-ins, but the one that occurred most recently was the worst. “The latest break-in is far more sophisticated,” he tells The Spinoff via email. Of the destruction, he says it will cost “tens of thousands of dollars of damage at a minimum” to repair. He calls the bronze cherub statue that sat on its own plinth on the mezzanine floor “irreplaceable”. “I’m sure it’s only a couple of hundred dollars of bronze but would be thousands to replace even if we’re able to,” he says.

Gutted! The owner just let us know the we've has been broken into, vandalised & items stolen incld the copper bar front, wiring, and an irreplaceable 94-year-old bronze statue from the Mezzanine floor. It's irreplaceable.
Please let us know if you're in the know. We want it back pic.twitter.com/k68tWmPBIp

The longer the St James sits derelict, Bielby says, the harder and more expensive the restoration work becomes, and the more damage it receives from vandals. “Mothballing is death by a thousand cuts.” Foundational work and earthquake restrengthening needs to be done before the venue’s floorboards are restored, its 1928 origins are honoured, and the doors can open again.

So Bielby’s launching a new plan in an attempt to do just that. Today, he’s announcing an official uncoupling of the projects. The St James Theatre’s restoration timeline is no longer intricately entwined with the construction of the apartment complex. While it’s still expected that the two will share amenities, it’s hoped that separating the plans will lower the risk and make each a more attractive proposition for investors and funding applications. “The proposal … sees the disconnection of the projects and enables the opportunity for the theatre project to progress independently of the apartment project,” Bielby says in a press release issued today.

That’s not all. The apartment complex plans have changed. It’s now bigger, expanding from 300 to 400 apartments, and from 41 to 43 levels, including 400 bike parks, 200 car parks and retail space. It’s estimated to cost $400 million to build, and $1 million has been spent overhauling earlier plans to get them ready to be submitted for resource consent approval. They’re sitting with Auckland Council and a decision is due later this year. An artist’s rendition of the new development shows a sleek, shiny, curved tower dominating the skyline on that part of Queen Street.

Bielby’s pivot has been praised by Noel Reardon, Auckland Council’s heritage manager, who calls it “great news,” a thought echoed by central city councillor Pippa Coom, who is “incredibly excited by the prospect of St James Theatre’s restoration moving past its current impasse”. Auckland Central MP Chlöe Swarbrick, who hosted a St James hui a year ago in an attempt to get the government to match Auckland Council’s restoration fund, has also weighed in with cautious optimism. “This theatre is the cheapest ‘new’ venue we’ll ever get,” she says. “Today’s news of progress on the apartment development puts this shortfall squarely back in the spotlight.”

Bielby’s optimistic too, but he’s been here before. A year ago, he told The Spinoff: “The theatre’s not on my journey. I’m kind of on the theatre’s journey. It’s in control.” His timeline hopes are for all the pieces for fall into place before the end of the year. Because of foundational issues, the theatre has to be restored first or it will be “indefinitely mothballed”. Done the other way around, he believes the St James “will sit there in a state where it is not compliant with modern building codes, and the upgrade costs are just too great and the work too risky to do.”

So, if this plan fails, is that it? “I think we’re definitely approaching the point where we ask ourselves, ‘Are the decision-makers trying to indefinitely kick the can further down the road?'” Bielby says. “[If] there isn’t the interest from the Ministry of Culture and Heritage to save this place … we have to let it go. My feeling is this decision is coming sooner rather than later.”