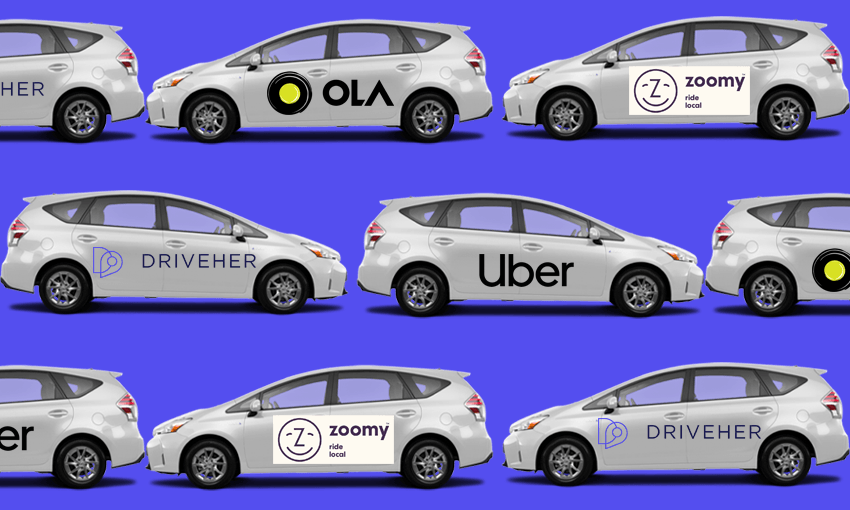 It pays to shop around, and ridesharing services are no different. Some are cheaper, others are more convenient, so which is which? We take you through four options worth trying in Auckland.

It’s the company synonymous with 21st-century ridesharing. A company so big, so ubiquitous, that ‘Uber’ isn’t just a name any more, but a verb in and of itself. You ‘Uber’ to your friend’s party, you ‘Uber’ to that meeting in town, you ‘Uber’ to work because you missed the bus and you’re already running 10 minutes late. If you’ve tried ridesharing, you’ve most certainly tried Uber.

Founded in 2009, UberCab (as it was known at the time) was the creation of San Francisco-based entrepreneurs Garett Camp and Travis Kalanick. Camp initially came up with the idea after he and his friends ended up spending $800 hiring a private driver on New Year’s Eve. Two years later, the Uber mobile app was born. In 2014, Uber launched in New Zealand, and as of last year, it says it has approximately 6,000 “driver-partners”.

Currently, Uber takes a 25-28% commission (depending on GST registration) from its drivers in New Zealand and rides have a minimum fare of $6.50. Fares for an UberX (four-seater ride) start at a base of $1.30. It then calculates the rest of the fare based on the journey’s distance ($1.35 per km) and time (30 cents per minute). This can go up, for example, if you’re late or if you order an Uber when surge pricing is applied.

Plenty of people have called for passengers to #boycott and #delete the service, so why don’t we? Because it’s easy, it’s convenient, and the app’s got a ton of features (split fares, multiple destinations, real-time status updates etc.) that are genuinely useful from a customer point-of-view. All in all it’s a great service – as long as you’re happy to accept the worst of the gig economy that comes along with it.

Saying you’re going to ‘Zoomy’ somewhere doesn’t quite have the same ring to it (trust me, I’ve tried), but in the last few years, New Zealand’s first ever locally-owned ridesharing service has managed to take on Uber with admirable fervour. Last year, it signed up more than 2,300 drivers, debuted a brand new logo (it’s a smiley face, get it?), and expanded into its third city by adding Christchurch to its roster.

Founded back in 2012 by New Zealanders James Fisk and Neil MacDonald, the company initially had a rough start with many reporting issues with using the app. But when I first tried Zoomy out back in 2017, its service was practically indistinguishable from Uber’s – pick ups were seamless, drivers were friendly, and the app was easy to use. Since then, it seems like the company’s gone from strength to strength, embarking on a huge marketing push and signing up hundreds of new customers and drivers, many of whom also drive for Uber (it’s not just ridesharing, it’s ‘drivesharing’ too, you know?)

Zoomy describes itself as being “locally owned” with “lower rates” and “better service”. That’s because it takes just a 15% cut from its drivers and has a slightly lower base fare of $1.20 for customers in Auckland (these are slightly higher in Wellington and Christchurch). Like Uber, the rest of the fare is calculated based on the journey’s distance ($1.30 per km) and time (30 cents per minute). Again, this can go up if you’re late (60 cents per minute of waiting) and prices do go up when there’s increased demand.

Ola launched in New Zealand barely six months ago, but back in its home country of India, Ola commands a huge share of the ride-hailing market. Founded by Bhavish Aggarwal and Ankit Bhati in 2011, Ola proceeded to expand into dozens of cities all over India before reaching Australia and the UK last year. In November, Ola added New Zealand as its fourth overseas post.

Just over a month after its launch, Ola said that it’d already signed up 4,000 drivers and clocked 25,000 rides in New Zealand, which all sounds a bit dubious if you ask me (the first time I ever used Ola was after seeing Bloc Party in November and there were about two drivers in the whole CBD). But then again, in its efforts to usurp its newcomer status, Ola has pushed aggressively into the market, starting with a commission rate of just 9% for drivers and discounts of up to 50% for passengers. It’s also been advertising like a fiend: on the back on buses, on pre-roll YouTube ads and by sponsoring the Vodafone Warriors.

With its 9% trial period over, Ola now takes an 18% commission rate from its drivers, which is less than Uber but more than Zoomy. Fares in Auckland are calculated pretty much identically to Uber with rates slightly higher in Wellington and Christchurch. New customers also get 50% off all rides for two weeks from sign-up, up to a maximum of $10 per ride. After that, there are usually plenty of coupons that you can apply (right now, it’s offering $5 off rides in Auckland). Sometimes these discounts make a huge difference compared to Uber and Zoomy, but other times, there’s hardly any difference at all, so it pays to check.

Ola might be new here, but it’s got an established system that’s allowed it to embed itself pretty notably in just six months. That’s not to say it hasn’t had its fair share of controversies over the years with privacy, technical glitches, and driver pay. The usual tech stuff, you know?

Ask any woman and they’ll tell you about an uncomfortable encounter they’ve had in a taxi or Uber. Maybe it’s just an unsolicited comment, but at other times it can be a lot more serious. It’s why female-only ridesharing apps have been deemed necessary which is where DriveHer comes in.

Founded in 2018 by 23-year-old Auckland law student Joel Rushton, Rushton says he was inspired to start DriveHer as he often worried about his partner’s safety when she caught taxis home late at night when they were living in Melbourne. It was also during this time that he learnt about a women-only ride-sharing service in Australia called Shebah and decided to try something similar here.

With DriveHer, all drivers identify as female. With passengers, anyone can signup for an account and women can use the service as freely as they choose. For men, it’s a little different – they’re only allowed to use DriveHer when they’re travelling with at least one other female passenger. Children of any gender up to age 14 may travel unaccompanied.

Currently, DriveHer operates exclusively in Auckland and takes a 20% commission from drivers. Base fares start at $3, rising to $4 at peak times (ie: weekday rush hours, Friday/Saturday nights, public holidays). Because it uses peak and off-peak times, DriveHer doesn’t employ surge pricing. But there’s an additional $10 night surcharge as the service generally doesn’t have drivers out at night and the surcharge is meant to compensate them for the trips.

“We are a bit more than other rideshares as we are a small start-up, though our drivers tend to get more per ride than others,” says DriveHer director Emily Rushton. “We are however moving into pre-booking most of our rides rather than being a ‘rideshare’ exactly as we don’t have enough drivers to service Auckland at this stage.”

DriveHer’s the only one out of the four I’ve yet to try, and to be honest, the price does seem a bit prohibitive. But I do see its value – it’s definitely good to have the option – and sometimes, it pays to have that extra bit of assurance that you won’t be stuck in an uncomfortable situation. After all, a good ridesharing experience isn’t just about cost and convenience – it’s about feeling comfortable as well.