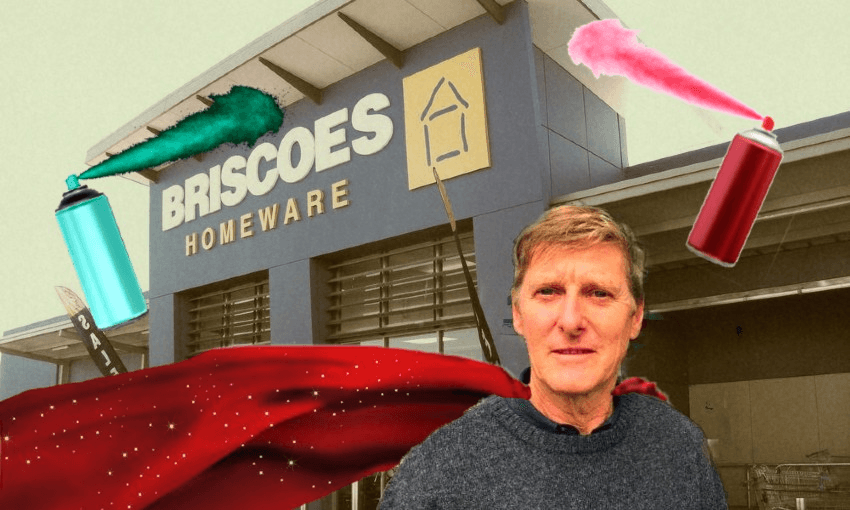 The tale of Ian Swney: The spray-can-wielding wage subsidy avenger

The story of how a leisurely bike ride around Hawke’s Bay turned into a one-man rampage against perceived corporate privilege.

In the early hours of October 10, in a motel in Napier South, Ian Swney, 62, was struggling to sleep.

A semi-retired kindergarten teacher, he’d travelled to Napier from his home in Morrinsville to join his friends at a bowls competition. He wasn’t really a fan of the game though, so he’d planned to do some cycling around Hawke’s Bay instead.

Yet that morning, his mind wasn’t or bikes or bowls, sleep or sightseeing. It was on an RNZ interview he’d heard a few days earlier, and a text he’d received from his grandson.

The interview was with an Auckland academic, who had said that out of the thousands of businesses that took the government’s Covid-19 wage subsidy, there were three companies in particular that didn’t need it. Summerset Villages, Hallensteins and Briscoe Group. This was based on the fact that, in the months after receiving the subsidy, they’d reported large profits and paid out shareholder dividends. None of the three companies indicated they were intending to pay it back.

Swney was incensed. For the past few years, he’d become more aware about corporate privilege, wealth inequality and the perpetual advantage enjoyed by a few. He’d concluded that, because wealth breeds wealth, the decks of prosperity are typically stacked in favour of individuals and organisations who already have lots of money.

Knowing that the almost $26m taken by those three big companies would need to be paid back by younger generations, he texted his grandchildren to find out their thoughts.

Then the text came back from his grandson: “Feeling it. But what can you do?”

What could he do? What could he do? This was the question that was keeping Swney up that morning in Napier. But, as the clear and brisk dawn broke over Hawke’s Bay, his eyes snapped open, and the answer suddenly came to him: he knew exactly what he would do.

After breakfast at the motel, his friends left for their bowls game. Swney hired a bike from a nearby shop, got ready and headed out for a day ride around the region, taking the scenic state highway 51 south through Awatoto. Riding along the stunning coastline, with the morning sun on his face and the onshore breeze at his back, Swney pondered his plan. He’d do it that evening, he thought, at the Briscoes in Napier – an audacious public rebuke for all to see.

It was late morning, almost noon, when he arrived in Hastings and was cruising through the town centre, when something caught his eye. Sitting there, big, bold and royal blue, was a Briscoes. And right next to it – the other critical piece in his already devised plan – was a Mitre 10.

The moment was too serendipitous be ignored. Now was the time, Swney decided. He went to the Mitre 10 and purchased two cans of spray paint for $17.99 each – one red and one green.

He then rode across the carpark to the Briscoes, got off his bike, and, having never done anything like it before in his life, tagged on the outside wall in foot-high words: “Wage subsidy not shareholder dividend give it back.”

It was good work, Swney thought, but it could be better. The message was in an inconspicuous spot, and not many people could see it. So he went around to the side of the building facing the road, and on a more prominent canvas, created another, larger piece of artwork with the same words.

Many passing motorists tooted, others gave the thumbs up. Some simply didn’t understand. It didn’t matter. The word was out. And now, having served some retribution, Swney’s plan had changed. The day was young, and he would spend it visiting other stores, spreading the message far and wide.

However, before he could leave for the next location, the store security guard showed up and confronted Swney. “What did you do that for?” he demanded. “How would you feel if I did that to your house?” He confiscated the bike and called the police. When they arrived, they had a frank yet polite chat with Swney, advising him against such wilful damage of property. There were better ways to do it, they said. Why not try a more legal form of protest?

So after relinquishing his cans of spray paint and giving his details, Snwny got on his bike and rode over to the Hastings Hallensteins, where he stood outside the entrance and staged a one-man boycott.

“Hallensteins has its hand in your pocket!” he told passing customers. “Buy your clothes somewhere else.”

It was legal. But it wasn’t as effective, or exciting. So after an afternoon of protesting, he returned back to the motel to tell his incredulous friends what he’d done. The following day, he staged another protest outside the Hallensteins in Napier. It was quiet, and there were few customers, so Swney gave up after 20 minutes and returned to Morrinsville that afternoon.

A few days later, Briscoe Group announced it would be repaying its $11.5m wage subsidy after a period of strong sales. Although CEO Rod Duke didn’t comment on Swney’s act of corporate vandalism, one can’t resist thinking the timing of the announcement wasn’t purely coincidental.

When I call Ian Swney, he tells me he’s happy with his actions, and the fact police stopped him from vandalising more stores, given Briscoes eventually paid back the subsidy. Whether or not it mattered, his protest informed more people about something he thought was important, even gaining significant media attention.

His one regret, he says, was committing the deed in Hastings, where he had to travel to again for his court case.

“See, that wasn’t real bright. I should have just stuck to Hamilton, right?”

What about his charge of wilful damage, and the costs he would have to pay to the courts, and Briscoes?

To Swney, Briscoes is now square with the house. The company paid back taxpayers’ money and balance has been restored.

But it’s not over, he says. There’s still more work to do.

“I’m not done yet, because Hallensteins have still got to give it back. I don’t know quite to do with Summerset yet. But I’ve got a plan for Hallensteins.”

It’s a surprise, he says. He won’t tell me what he’s got planned.

“It won’t be anything illegal!”