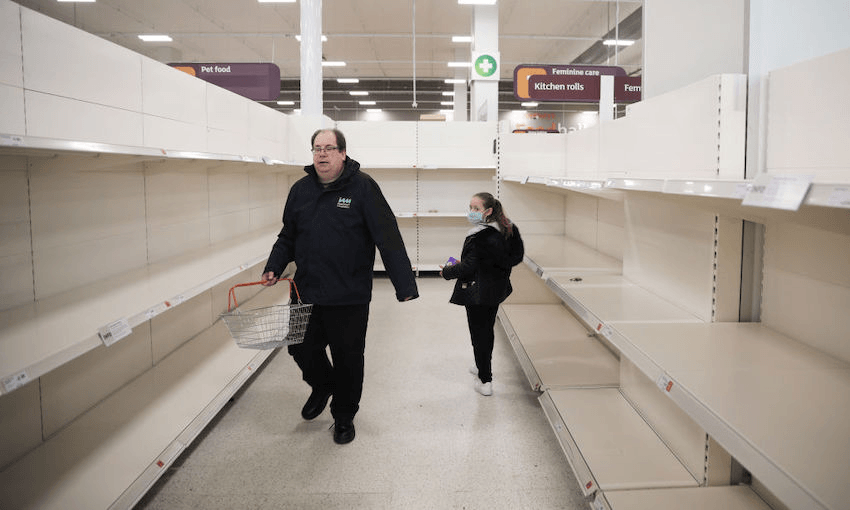 The darkness fell so fast: A dispatch from Britain under Covid-19

Government mistrust, confused messaging and fear have blighted the UK’s approach to the pandemic, says Jai Breitnauer, who recently departed NZ to move home to Britain.

That was the official text I got on my phone this morning, 24th March 2020, after an incredible 10 days of panic buying, confusion and government wavering. The UK is finally in lockdown, but the relief many of us feel is tinged with sadness and disgust at the delay and poor messaging from a leadership that doesn’t seem to have its people’s interests at heart.

Just two weeks ago, this was all still a bit amusing. You couldn’t get bog roll for love nor money, and hand sanitiser was a black-market item with a street value higher than cocaine. I took a trip into London with an overnight bag and found myself feverishly avoided on the tube. Later I realised I had a Hong Kong airport sticker on the back of my wheelie suitcase.

I tweeted that. LOL.

The memes were flying around and everyone self-assured was having a little chuckle about The Nervous Ones. Government messaging was clear – we got this. The NHS is fully prepared. Herd immunity is the ultimate goal. And with that, the Stereophonics played a selection of live gigs to tens of thousands of people, and I boarded a train with my boys to the countryside.

That was ten days ago, but quite frankly it could have been a year. We took a 15-minute trip from Bristol to North Somerset with our bikes. The train was mostly empty. We got off at a remote station, and cycled The Strawberry Line five miles to the grandparents’ house. My boys, aged 11 and 8, had a competition to see who could get the muddiest and Gran had to wash and tumble dry their clothes when we arrived. We took a walk on a local beach, ate some chips, and headed back for a movie.

It was gloriously normal although there were undertones of concern. Italy was already on lockdown. I dissected the situation over a bottle of wine with my mum and dad. A local school had closed for deep cleaning. A friend had just come back from China. My cousin was worried about a planned weekend in Europe. But it wasn’t happening to us. We were observers. It was all very sad, but things weren’t quite that bad here.

The next day my dad gave us a lift home. As soon as we got in the front door, back into reception, my phone beeped to let me know a child at school had symptoms of Covid-19. My younger son coughed, and suddenly our carefree weekend seemed like a distant memory. I hadn’t even taken my shoes off.

We are good Kiwis with a civil defence kit ready to go, but even so we found we were underprepared. We asked a friend to hit the supermarket but she couldn’t get anything on our list. No flour, no coffee, no peanut butter. No fruit and veg, no popcorn, no milk. Just two days ago the shelves had been mostly well stocked. I had bought poppadoms – fucking poppadoms. Why hadn’t I bought Ibuprofen? The apocalypse happened right under our nose and we didn’t notice.

Over the next few days no symptoms in my family emerged, but what did become clear was how the UK response to Covid-19 was spiralling out of government control. My phone vibrated every few minutes letting me know yet another thing had been cancelled. My son’s music group, forest school, Judo. Bake sales were prohibited, the PTA meeting was postponed, local museums closed their doors and the kids’ upcoming school dance performance was iced.

By March 18 we knew schools were going to close but no one knew what that would look like. Spain was in lockdown and France was about to follow. The government announced financial support from banks that the banks themselves seemed to know nothing about. The country’s chief scientific adviser had only just stopped talking nonchalantly of letting 60% of the population get the virus in order to promote this so-called herd immunity, a plan that had been immediately derided by experts. But Boris was still smiling at the press conference. We could turn it round in 12 weeks, he said. Go out and enjoy the sunshine, he said. Blitz Spirit. Keep calm and carry on. And that is exactly what Brits did.

On Sunday, March 22, UK Mother’s Day, all of the country seemed to have the same idea: go outside. With pubs and restaurants closed down since Friday, and many other activities like cinemas and theatres halted voluntarily a few days before, the people of Britain were left with nothing else to do but go for a walk in the park. Outdoor spaces were jam packed. Snowdonia had its busiest weekend ‘in living history’. That phrase, herd immunity, was still being shared and it was clear the government had failed to convey the gravity of the situation to the general public. While Jacinda did a press conference for children, Boris told the public to follow scientific advice ‘sedulously’, a word that hasn’t been heard on the streets of London since Jack the Ripper made the headlines.

I look to New Zealand and I see calm concern. I see a leader holding steady the rudder of a boat that contains all Aotearoa’s people. Meanwhile, in the UK, the government is arguing over their own space on the Titanic, with a policy that can be summarised as ‘some old people might die but it is better for the economy.’ Of course, after the pictures of thousands of people descending on the parks emerged there was a massive U-turn. A lockdown is in place, emergency powers have been granted, the military have been called in. But there has been a 26% increase in UK deaths in the last 24 hours, and the ExCel exhibition centre in London will be transformed into a field hospital in coming days. It feels as if society is collapsing around our ears.

It seems incredible that, 10 days ago, when I was cycling in the countryside with my kids, my biggest concern that one might get mud in their eye. That seems like a very foreign place indeed, and I don’t know how it all got so dark so quickly. But I do know that when this is over, all our governments will have a lot of questions to answer – and Boris’s should be first in the dock.

Too few of us understand the long term risks of contracting even a mild case of Covid-19.
By Freya Sawbridge
Guest writer
28th April, 2022

Too often disabled people were treated as an afterthought, rather than the important, at-risk community they are.
By Robyn Hunt
Guest writer
28th April, 2022

What does the High Court decision on MIQ actually mean?

A group of US men behind the phony 'church' that profited from the dangerous substance face criminal charges. A Waikato man just keeps on selling it.
By Toby Manhire
Editor-at-large