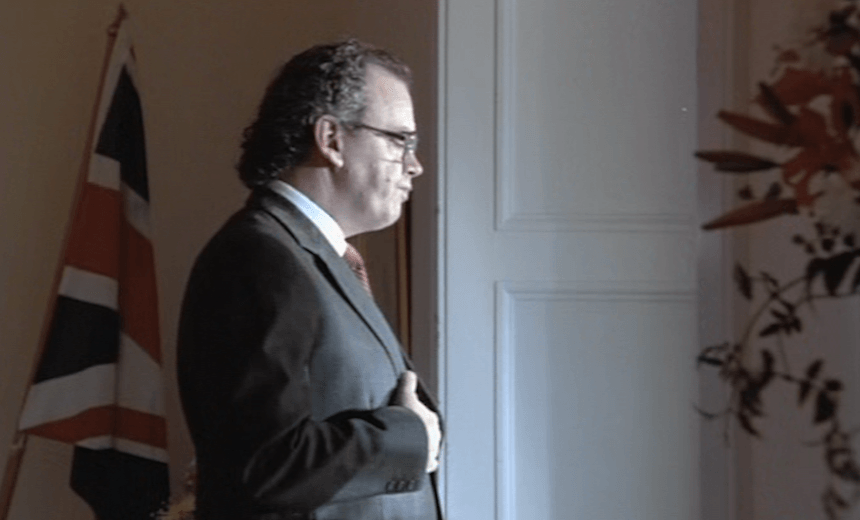 Thirty years after the sinking of Greenpeace’s Rainbow Warrior, Joseph Nunweek sits down with a bizarre 1993 made-for-TV film about the momentous historical event.

It was the 30th anniversary of the sinking of the Rainbow Warrior this weekend just past, and it’s an event that’s lived a odd sort of double life since then. The way I see it, there are two stories here:

Not that it isn’t a pain to find – or even Google. My research tells me that in its ire, New Zealand managed to produce or co-produce about three separate docudramas about the bombing in the 10 years after the event, an astonishing use of resources, given the budgetary constraints local television has always faced.

But The Sinking of the Rainbow Warrior (1993) is the only one where real international money came to the party. Capital Cities/ABC Video Enterprises, Bonny Dore Productions, Ten Four Productions – these were American production companies that could smell their way round a formula, if not a mega-hit.

I finally got my hands on a copy of the now out-of-print DVD. The weird fade-outs and fade-ins of 1990s television are retained, everything happens awfully quickly and the formula goes out the window. After a Star Wars-style scroll of the story so far, we’re introduced to our hero, Sam Neill. He’s marking time here, on the cusp of Jurassic mega-fame as Auckland’s top detective. “Anything else for me?” he asks his men at the morning go-round. “Those bloody troublemakers Greenpeace are coming into port,” the late Bruno Lawrence warns. “Always stirring things up.”

As it turns out, Greenpeace (here embodied by grizzled honest-to-god movie star Jon Voight and a young Lucy Lawless) don’t get much of a chance to stir anything. A seeming deluge of sinister Frenchmen turn up at once – some in trench coats, some with little moustaches, many with fluid accents. They do things like constantly watch the Rainbow Warrior in their binoculars while drinking red wine and eating cheese, and one turns up still wearing his trench coat on the boat itself, pretending to be a friendly activist.

Before the 15-minute mark, the bombs have gone off. They’re represented by a sparkler being held in front of a timer device and Voight and team throwing themselves around cabins as water gets hosed everywhere. This whodunit has kicked off with a real roar, but my money is already on the mysterious Gallic visitors.

At which stage The Sinking of the Rainbow Warrior becomes one of the weirdest viewing experiences I’ve ever endured – a 90 minute murder mystery where the assailants are identified in the first 10 minutes, arrested in the first 30, and a further hour is spent debating whether to keep holding them in custody or not.

Without wanting to fault the tireless work of the actual detectives in the days after the attack, years of police procedural TV drama cannot prepare you for these remaining two-thirds of the piece. Watch NZ telly lifer Mark Ferguson conduct a forensic examination of a yacht and say “try the really wet bit in the corner”. Or see Bruno Lawrence (who seems furious just to be in the movie) flip over a chair in rage, walk out of frame, and then carefully walk back into the shot 10 seconds later and right the chair.

Everyone’s making hay about Nick Pizzolatto trolling us with True Detective‘s second season. If he tried anything like this, he’d probably be shot.

Apart from a bunch of filming round the Ferry Building, NZ increasingly shrinks in scope to two small, dank rooms. One has Sam Neill and a bunch of cops looking at a map of the country and putting pins in it (“There was a French backpacker sighted here… and here…”). The other is the private office of the Prime Minister, in which a guy with a mullet pretends to be David Lange and says stuff like “I need results” and “find the truth”. The hair makes Lange look like he’s turned up to make a show of fixing someone’s kitchen sink for 30 seconds before rooting them – in light of the big man’s passing, it’s positively obscene.

So Sam Neill spends most of the time saving the day, kind of. What about Greenpeace? I’m struggling to piece together what Jon Voight’s chronology was at this stage. All I know is that he was receiving Oscar noms for being in actual movies like Runaway Train in 1985, experienced a “spiritual awakening” towards the end of the decade, and was appearing in movies like this only five years later. Which is to say that all fame is fleeting, time weighs heavy on a man, and although Voight rightly looks bewildered and upset to find himself in Auckland in the early 1990s, none of this translates into his performance as Captain Peter Wilcox (who, incidentally, is still out there doing good things).

The rest of Greenpeace get depicted as a bunch of wet and ineffectual hippies who walk out of the room crying at the slightest provocation and shout expository lines over each other. Maybe this is meant to be trauma, but it’s not like any trouble went into establishing the characters at the beginning of the film. This appears to simply be the way they are – hard done by, too flaky to be respected. Voight just goes around berating them – Neill, the cops, a car he chases. He’s both wooden and belligerent, like getting hit by a 2×4.

That last one is from where Alain Mafart and Dominique Prieur finally go to jail, obviously. They got to film in the old Mt Eden Prison courtyard, which is cool. Then the film ends like a Steinlager commercial, with Voight and Neill having a beer to celebrate a job well done.

In the interests of historical accuracy, we get another quick scroll, which is more or less “PS A FEW MONTHS LATER DAVID “SEX” LANGE NEGOTIATED WITH THE FRENCH AND THE PEOPLE YOU JUST SAW GOING TO JAIL GOT RELEASED”. Fade to stock footage of the ship getting scuttled up North, the most emotional part by far of what’s Christendom’s most bloodless film.

US made-for-TV movies have a long, proud tradition and can be a lot of campy fun, but I didn’t follow or enjoy this as someone who has a reasonable idea of the history behind it. The thought of an American audience having inadvertently encountered it on a Wednesday night in 1993 is objectively cruel and terrifying to viewer, cast and crew alike.

The biggest problem is that it’s not really a functioning adult production at all. It’s a pantomime for Kiwis who knew that a boat was blown up, and that it was the French that did it, and that they were rarked. Aside from the crap bomb detonation, The Sinking Of The Rainbow Warrior isn’t a total cut-price effort. There’s some good cinematography, underwater filming and a bloody helicopter at the end! So why did no one investing this money demand that the final product translate to an overseas audience?

We can do CGI boat explosions now, and Jon Voight has joined the Tea Party so it’s safe to say he’ll never play a Greenpeace captain again. There’s just been a big anniversary – but no one is racing to do another TV or movie dramatization of July 10, 1985 and what came after. There’s a much bigger story out there about the nuclear-free movement that people fought, suffered and died for – but as our Rainbow Warrior story is mainlined through years of retrospectives, it becomes a very particular kind of local narrative. No mystery, a lot of protracted political wrangling where we don’t come off that well, and an escalating series of news bulletins to yell at from the couch. Told straight, it’s unfilmable – but there’s a certain magic in knowing that once, someone tried.