The American lunch meat has a special place on dining tables halfway across the world, from the Philippines to Japan to South Korea – and now, on the tables of Asian communities in NZ. How did this happen? Jihee Junn investigates.

Believe it or not, but Spam and Seolnal (or Lunar New Year as it’s more widely known) go hand-in-hand in South Korea. In addition to the autumn holiday of Chuseok (or Thanksgiving), Seolnal is a time of the year when millions of families gather together to eat food, play games and perform various rituals like jesa and sebae. Seeing as it’d be rude to turn up to your relatives’ empty handed (someone’s gotta bring chocolate on Christmas, right?) many take gifts – typically food or household items – with one of the most popular being an ornately packaged box set of the fleshy pink canned meat.

In 2019, South Korea’s domestic manufacturer of Spam reported it had sold around 1.2 billion cans – or 24 cans for each person in the country – since starting production in 1987. But it’s not just during the holidays that Spam gets consumed. Sometimes it gets eaten as a side dish, fried in a pan to have with rice; or in gimbap, the sushi-like bite-sized meal, or tossed into kimchi fried rice. Most notably, Spam is used in a dish called budae jjigae – which literally translates to “army base stew” – and it’s this dish more than any other that explains the unique relationship not only South Korea, but also other Asian nations, have with the luncheon meat. 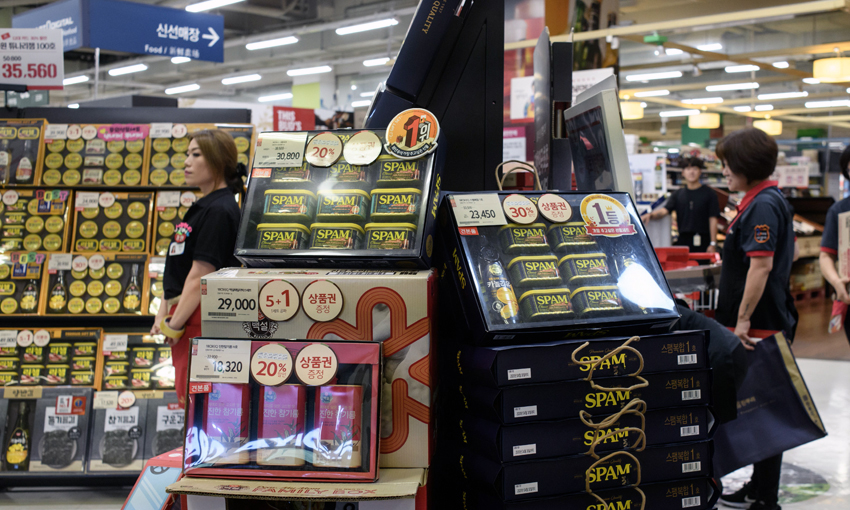 Spam gift boxes are displayed at a supermarket in Seoul. (Photo: ED JONES/AFP via Getty Images)

Spam (for “spiced ham” or “shoulder of pork and ham”) was introduced by the American company Hormel in 1937. During World War II, the meaty, portable and non-perishable foodstuff became a staple for Allied troops overseas, who introduced it to local residents. But unlike Europe, where its popularity largely waned after the war, the product remained in demand in Asia and the Pacific Islands.

In Hawaii, where less than 1.5 million people are thought to consume a whopping seven million cans a year in famous dishes like musubi, food rationing during wartime coupled with its geographic isolation from the US mainland not only put pressure on Hawaiians to hoard Spam, but view it as a precious source of nourishment during a turbulent time. Similarly in the Philippines – a former US colony – World War II rationing eventually led to Spam becoming a highly popular and important cultural symbol, with Spamsilog being a breakfast favourite in many Filipino households. In places like Hong Kong, Spam was the only meat available immediately after World War II, and it continues to be served in noodles, sandwiches and rice dishes to this day. It was the same situation in Japan, with the residents of the southern Japanese island of Okinawa becoming particularly ardent Spam enthusiasts, using it in onigiri (rice ball) and chanpurū (stir fry) as a consequence of US military occupation until 1972, and it has an ongoing presence on the island to this day.

Which brings us back to budae jjigae, the hot, spicy stew featuring a mishmash of local and imported ingredients – kimchi, sausages, baked beans, instant noodles and, of course, Spam.

Introduced by American soldiers who fought the Korean War in the 1950s, Spam became a sought-after commodity when the country was plunged into widespread starvation and poverty. Food was scarce, especially meat, and the Spam, ham, hot dog sausages and other processed and canned goods that flowed out of US army bases became a godsend for hungry masses. Much of it came as unwanted scraps, discarded by soldiers and scrounged by starving locals who’d salvage whatever they could to survive. Eventually, people became innovative – as they often do during times of crises – giving birth to the comforting stew Koreans still enjoy today. For many first-generation Asian immigrants in New Zealand, Spam takes on another, more nostalgic connotation; one that harks back to childhood and growing up with culturally traditional food. Because although Spam in and of itself is a product of American food manufacturing, its widespread adoption in the east has made it uniquely and unmistakably “Asian” in many contexts.

“I’ve eaten it my entire life. I can’t even remember a time when I wasn’t eating it with my family,” says comedian James Roque, who moved to New Zealand from the Philippines at eight years old. “It’s unbelievably common in Filipino households.”

Roque says he often ate Spam fried crispy with white rice and banana sauce, melding salty and sweet into one dish. “[Nowadays] I buy it sometimes if I’m feeling nostalgic. I just crave it once every three or four months. Although I try not to eat it as much because it’s fucking terrible for you. High fat, high sodium; you wonder why there are high rates of heart disease and diabetes in the Philippines!

“It’s one of those things that holds such a nostalgic place in my memory and heart, but then when you really break it down, the source of it is America waving its dick around and trying to be a superpower in the world. So its source isn’t great,” he says. A popular way to serve Spam in the Philippines (Photo: Getty Images)

Tze Ming Mok, a New Zealand writer and social scientist with a Chinese, Malaysian and Singaporean background, recently had Spam for the first time as an adult. She’d just rewatched the film Always Be My Maybe where a Vietnamese-American child, whose adult version is played by Ali Wong, makes herself fried Spam with rice on the side when she’s left alone at home while her parents go to work.

“I literally hadn’t had it since I was a kid,” says Mok, recalling how her mother regularly made deep-fried Spam. “When I first took it out of the can it was like dog food! But it was as good as I remembered it. Deep frying it renders the fat and makes it crispy, and you can also slice it really thin like bacon and use it as a garnish.

“I still have some at home though. It’s pretty unhealthy and high in salt and fat [so I can only have] small amounts at a time.”

Wow got so emotional rewatching Always Be My Maybe yesterday that I had to go buy Spam today and deep fry it like my mum did when I was a kid. pic.twitter.com/pWbFjp2t6I

“I grew up eating Spam in various dishes. The most common and the easiest I’ve had was with fried egg, Spam and rice with ketchup,” says Yutak Son, who was brought up with Korean parents and is now head chef at The Shed at Te Motu Vineyard on Waiheke Island. “It’s nostalgic for sure! I can still remember the taste of sweet ketchup and the texture of Spam. I also think ketchup and rice is a weird combo but it works so well.”

Similarly, for me, whose family moved from Seoul to Auckland in the early 1990s, Spam reminds me of meals at home as a child – a simple dish my parents could whip up quickly (and cheaply) before heading to work in the evenings. I remember the Spam being sliced, dipped into an egg wash, fried in a pan and served with rice. It was salty and it was greasy – what kid could resist? I haven’t touched the stuff since then, probably because my tastes have been thoroughly westernised and also because the idea of eating a dense gelatinous block of meat now kind of makes me want to hurl. Cans of Spam on sale at the NZ supermarket (Photo: Jihee Junn)

“People who aren’t Asian or don’t get it can be so mean about it,” says Roque, who points out it’s difficult to talk about the food with non-Asians who can often be quick to judge.

“Like, they don’t get it to the point where I’m like ‘OK, relax because you’re starting to come across really racist now’. It’s the same tone a lot of people have when they say Asians eat dog and shit, this disgusting stuff that I would never ever touch … especially woke white people who want to be allies but will so easily dunk on you for eating Spam.”

So while Spam might just be an unhealthy and mysterious chunk of luncheon meat to some and a covert symbol of American imperialism to others, it’s also a showcase of culinary innovation and an icon of complex histories and cultures. It can also, granted you cook it right, be fucking delicious. Just don’t try and eat it raw from the can like this guy.