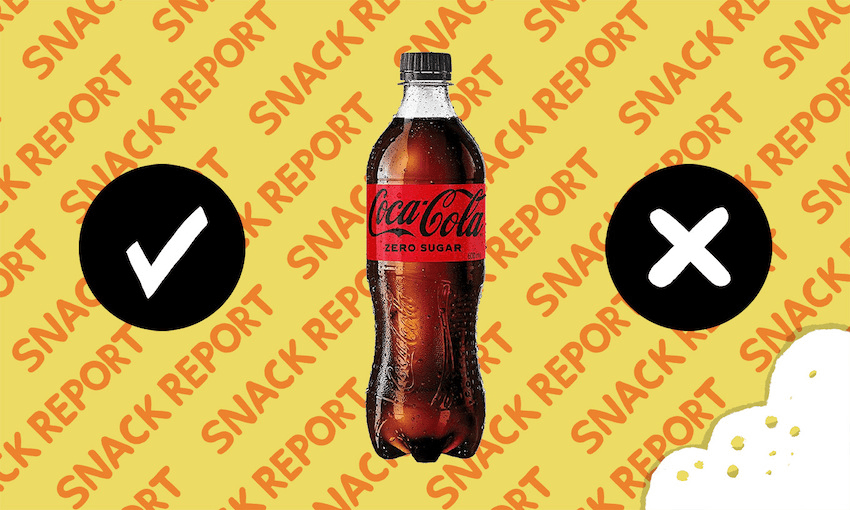 Introducing Snack Report, a series of bite-sized snack reviews. We try them so you don’t have to. Today: the new sugar-free offering from Coke.

In 1886, John Smith Pemberton made the perfect drink. And by perfect I mean that he combined cocaine and caffeine in a bottled beverage and marketed it as a medicine for virtually every ailment. By 1904, it was declared that putting an illicit drug into a product sold to and consumed by children was probably not a good idea, and the ingredient was removed from the recipe. The company needn’t have worried about sales. With eight(!) teaspoons of sugar – itself an addictive substance – in every can, customers stayed hooked.

Fast-forward through the sugar v fat war (sugar won) and approximately 254,893 science fair projects involving a tooth decaying in a glass of Coke and finally, the world has realised that actually maybe sugar isn’t the best thing to be consuming in liquid form.

And so: sugar-free alternatives. Coke has spent 40 years trying to make people buy things that are almost Coke. Diet Coke (1982) was first, targeted at the ladies and with its own distinct taste. Then Coke Zero (2005), which claimed to have the same taste as classic Coke and yet tasted like a watered-down version. And more recently Coke No Sugar (2017), which still tasted watered down but not as much as Zero. With every attempt, Coca-Cola inched closer to its dream product: a sugar-free Coke that tastes exactly like the Coke filled with an addictive sweetener.

Coke Zero Sugar is definitely the closest a sugar-free alternative has come to tasting like the classic Coke. Tasted alongside No Sugar and Zero, it has a fuller body and more presence in the mouth. But that was only because it was tasted within seconds of tasting the other options. I’m almost certain that if I tasted it on its own, I’d assume it was Coke No Sugar in a barely different bottle.

And that’s the point. These ultimately are all the same drink. Coca-Cola is trying to replicate Coke without the sugar and instead of waiting till they get it, they’re releasing every attempt.

Apparently Zero and No Sugar will be discontinued (wasn’t Zero allegedly discontinued ages ago?) but I can’t imagine that’ll have any material impact for a long time. My local dairies (home dairy and work dairy) still stock every option.

Will every other random Coke flavour (vanilla, cherry, orange etc) also be swapped to include a Zero Sugar version? Or will they save that for the inevitable next attempt that’s another 1% closer to the real thing and named Coke Sugar No Zero.

And so, the sugar spiral of death continues.