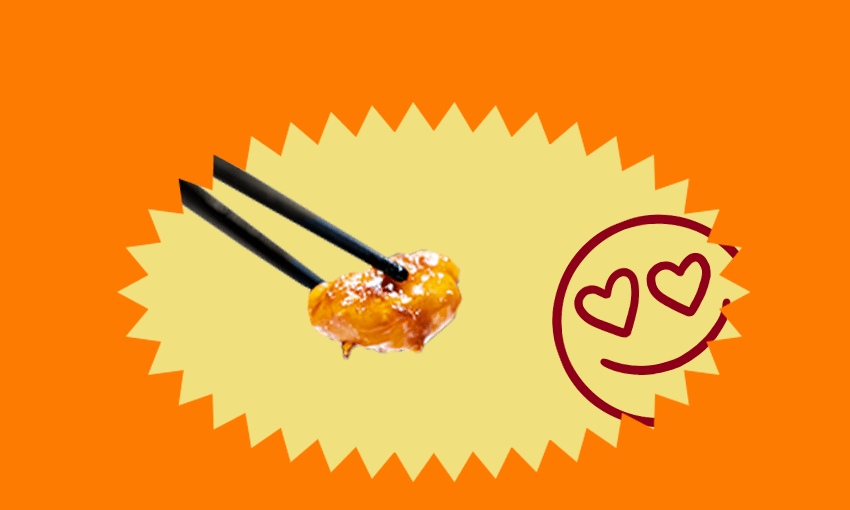 After all, like Coca Cola, McDonald’s, and disappointment, sweet and sour pork is everywhere. There’s a high chance your closest dealer is less than an hour away, whether you are reading this in Greymouth or Gabon. Described by author Clarence Kwan as the “ultimate unifier”, the dish is at home on the menu of every vaguely Asian takeaway around the world as it is on the menu of a three hour wedding dinner in Hong Kong. Everyone seems to love deep-fried chunks of red food. Given its zigzagging origin story, its universality is in its very blood:

1600-1900s: During the Qing Dynasty, early versions of sweet and sour pork become a common Guangdong and Fujian summer dish, made with rice vinegar, sugar, and hawthorn berry jam.

1700s: British merchants find fermented fish sauce in North Vietnam, where it is called “ke chiap” in Hokkien. They bring it back home where it is a hit.

1812: British traders try to make local versions of the anglicised “ketchup” with mushrooms, which can still be bought today, or tomatoes.

1850s: Fish disappears as an ingredient from British ketchup recipes.

Early 1900s: Tomato ketchup is imported “back” to China, where local chefs incorporate it into their dishes. Its long shelf life, vibrant colour, and instant flavour make it a natural fit for sweet and sour dishes.

1900 onwards: Chinese immigrants move across the world to places like North America, the UK, and New Zealand, bringing the ketchup-based sweet and sour pork we know today with them.

This to-ing and fro-ing across centuries, countries, and cultures has resulted in a huge number of variations on sweet and sour pork. On one end are soggy, radioactive red oversized boogers, and on the other are light, crispy nuggets of vermillion dreams. Having eaten at every point of this spectrum across the earth I have found that even the worst sweet and sour pork is better than no sweet and sour pork. No matter the quality, there are always four key elements:

The batter: This should always be crispy. Thick enough to give a good crunch but thin enough to not be clumpy or charade as meat. Therefore the dish should always be cooked fresh and eaten as soon as possible, which is not the case when it’s found in fill-your-plate-for-$7 mall buffets, though that version has its own charm. A version I ate once served the pieces on ice cubes to keep the batter crispy throughout the whole meal. By some magic the ice didn’t melt until all the pork was finished. Eating the perfect texture bite after bite made me believe, briefly, in human progress.

The meat: The pork or pork substitute should be tender, moist, and stand on its own in its salt and umami – there is no direct salt in the sauce. Traditionally, pork spare ribs were used in the dish, and the rib version can still be found in many restaurants, but less so in takeaway shops. Bone-on means that the meat stays tender, while pork shoulder and loin runs the risk of becoming overcooked and dry. Both are delicious if cooked properly. My favourite non-pork version is found at the 54-year old Yuk Lung vegetarian restaurant in Hong Kong. The vegan “shrimp” is a perfectly moist, non-fake tasting substitute with an illegally satisfying mouthfeel. Perfectly battered. I’ve never come across anything similar to this meat substitute anywhere and it earns its own sub-craving.

The sauce: I have eaten the rainbow of sweet and sour sauces, from Professor Plum purple to sunburnt red. If it looks too red or too purple, it’s definitely non-ketchup sourced food colouring and suggests that the sauce may be premade, therefore less delicate and balanced in texture and flavour. But I have been fooled by this before. Like people, sometimes the fakest looking are the realest tasting, and vice versa. It is flavour rather than colour that’s important: it should taste sweet but not sickly, and have a sourness that speaks of citrus rather than pure acid. If done correctly, the sweet will balance the interior umami of the meat, and the sour will lift the deep-fried nature of the dish from fatty to luxury.

The accompaniments: Probably the least important element, and highly subjective. Personally, I am a purist: I hate to see carrots, tomatoes, or corn. They shine brighter elsewhere. The classic accompaniments in a Cantonese version are capsicums, onions and pineapples, while some other regional Chinese versions will be much more minimal with just onions or sliced spring onion stalks, or forgo vegetables completely. The stingiest Cantonese versions will only have onions, and less stingy versions will use canned pineapple instead of fresh. One version I ate was so keen to prove that they didn’t use canned pineapple that they served the pineapple on the side, skin intact.

Sweet and sour pork made its public debut in New Zealand around 80 years ago. The first record I found of the dish was a 1938 dispatch from Hong Kong, with the reporter observing what locals were eating. It was around this time that the definition of “Chinese restaurant” in New Zealand was transitioning from meaning a Chinese-owned restaurant serving British food, to a Chinese-owned restaurant that served Chinese (or at least Pākehā-approachable Chinese) food to the public. By the 1960s, (presumably) Pākehā writers were publishing their own recipes for sweet and sour pork in newspapers, with the earliest record I found from 1963, and the most recent being 2022.

Today, both very good and very average sweet and sour pork can be found in New Zealand. My experiences are biased towards places I’ve lived and eaten in the longest, but the best sweet and sour pork I’ve had in the country (double-checked for accuracy by my mother) is Benson’s in Christchurch. Theirs is the absolute classic Cantonese version, down to the tricolour capsicums. The taste is textbook, and the texture is why people order this dish in a sit-down restaurant so that it can be eaten immediately. Joyful, just down the road and one of the most multicultural places in Christchurch, comes in second. Even though they are known to do wacky things like throw in celery and courgette, the cuisson of their pork has always been perfect. An honourable mention goes to the inimitable KC Café in Wellington, for their late night availability and impressive quality to speed ratio.

Sweet and sour pork will never go out of fashion, because it has never been about fashion. It has always been about satisfaction and the capitalisation of that satisfaction by hustling business owners, immigrant or otherwise. One of the many legends behind the Cantonese name of the dish, “goo lo yuk”, is that “goo lo” is the sound one makes when gulping to stop dribbling all over the table in anticipation of the dish (yuk means meat). I have been goo-lo-ing all over my keyboard writing this. It is deep-fried universality. Whether it’s purple, vegan, or on ice, there is a version for everyone. It is guaranteed satisfaction at a million different price points, variations and settings. Sans serif bao bars will come and go, but sweet and sour pork is here to stay.