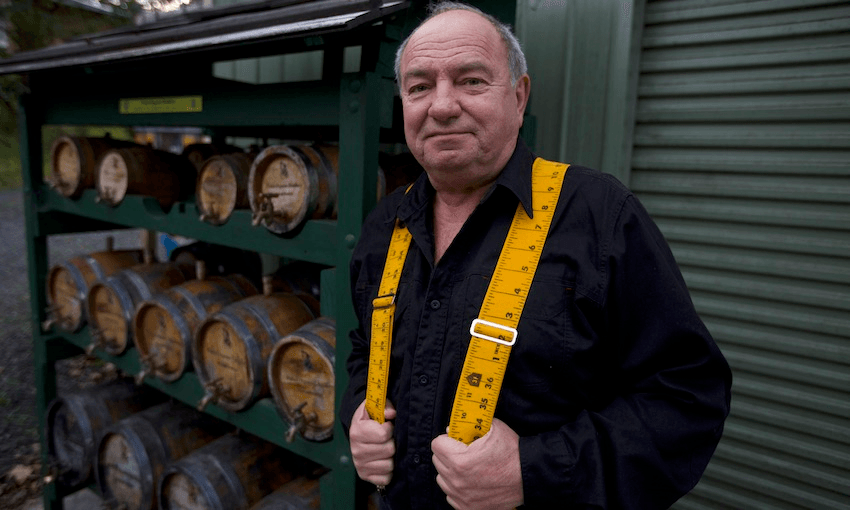 In an unassuming spot just outside of our biggest city, exacting standards and secret methods are producing some of the smoothest spirits you’ll ever try.

Alex Kirichuk makes the world’s best booze, he says. It’s a bold claim for a tiny distillery in Puhoi, a historic village just north of Auckland, but the Ukrainian master distiller makes a convincing case.

“We try to make everything the best,” he says. “Nobody can come to us and say we have better than you. We dare to say we make the best alcohol in the world.”

Puhoi Organic Distillery is a family business run by Kirichuk, his wife Iryna and their daughter Victoria. The distillery produces all kinds of spirits in myriad varieties, from ginseng gin, sauvignon blanc vodka and mānuka honey whisky to Bohemian quince schnapps, absinthe, the Eastern European rye spirit starka, and horilka, Ukrainian vodka made with mānuka honey and chilli.

The Kirichuks moved here from Ukraine in 2002, and “found this amazing corner of New Zealand”. They bought a property in Puhoi after discovering its 221m deep bore, which provides “the best water in Auckland”.

The best water is essential to make the best alcohol, but it wasn’t liquor the family had in the forefront of their minds. Iryna Kirichuk is a doctor who makes herbal tonics for health and wellbeing. They contain alcohol, which is essential for preservation and to work as a carrier for the herbal extracts.

It all began a long way from Puhoi, in the then-Soviet republic of Ukraine in the 1980s. Iryna was a medical doctor and Alex a nuclear engineer. When the most catastrophic nuclear power plant accident in history shocked the world in 1986, Alex was among the government inspectors sent to Chernobyl to deal with the aftermath.

“I should have died like all my colleagues,” he says, “but my wife made this product.” He’s convinced that it saved his life.

Originally a herbal tonic crafted from Ukrainian church wine, a version of it is now made as Dr Kirichuk’s Rejuvenate & Relax Red Grape Tonic. Iryna makes the tonic to “a special secret formula” using red grapes organically grown in New Zealand, and sells it alongside a range of other herbal tonics based on natural ingredients such as bee propolis.

“We bought this property in 2003, then starting experimenting because nobody produced good enough quality alcohol here for medical products,” says Kirichuk. Making spirits was a natural progression from the herbal tonics, as the Kirichuks, in keeping with their culture, see alcohol as aligning with good health rather than compromising it.

Kirichuk distils alcohol extracted from wine and uses only gravity, rather than a pump, to move it from tank to tank. “It’s very important to keep the natural structure undamaged,” says Kirichuk, who believes his distillery is the only one in the world to use this gravity-flow method.

He is very environmentally conscious — Chernobyl has a lot to do with that — and as of July this year, the distillery became entirely solar powered. Kirichuk believes it’s the only one of its kind in the southern hemisphere. Instead of cardboard boxes, bottles are delivered in wooden crates made from recycled pallets that are returned to the distillery and reused, and all natural waste is composted.

The distillery uses French glass bottles made by a company that mainly produces perfume bottles, with a German glass stopper that costs almost as much as the bottle. They deliberately keep output small, says Kirichuk, and until recently, sold only through their own website and Fine Wine Delivery Co. Smith & Caughey’s also now stocks some products.

Kirichuk draws an analogy between his products and the Hermes Birkin bag, a sought-after celebrity favourite. “They make only six bags in a week and they’re hand-crafted. Nobody is hurrying to make more,” he says.

But while Birkin bags retail at around $30,000 a pop, Puhoi Organic Distillery keeps its prices reasonable by spending nothing on distribution or advertising, says Kirichuk.

What’s more, the use of small Ukrainian oak barrels means the distillery can produce whisky and rum quickly as more of the alcohol is in contact with the oak, Kirichuk explains. “Big distilleries don’t use small barrels because they cost much more money for the same amount of alcohol, and they’re inconvenient to work with,” he says. “But in six to eight months, it has the same effect as 10 years in a big barrel.”

They also make spirits for private labels — everything from a range for the spirit brand Karven; a ginseng vodka given to VIP guests at Giraffe, the Auckland restaurant of well-known chef Simon Gault; and the Commodore Reserve gin and rum produced for the Royal New Zealand Yacht Squadron. One-off private labels for company Christmas parties and to be given as memorable wedding presents are also popular.

All Puhoi Organic Distillery’s spirits, the gins in particular, are remarkably smooth, with none of the throat-burning aspect you might associate with neat booze. “We have a lot of people come in who hate gin, but when they try our gin neat they change their minds,” says Kirichuk. “It doesn’t mean they start liking other people’s gin!”

“To make gin, it’s not enough to have a still and juniper berries. I’ll tell you one secret of why our gin is so good — we clean the alcohol before we convert it to gin,” Kirichuk explains. “Nobody does this because it’s time-consuming and inefficient, and they have no idea how to clean it. We have three stages — it takes us 10 days to prepare the alcohol before distilling it with botanicals. It’s a new type of gin.”

Understandably, then, when Richard Poole, operations general manager for Fine Wine Delivery Co, first tried Puhoi Organic Distillery’s products around five years ago, he was impressed. Poole is a real connoisseur of craft spirits, and Fine Wine Delivery Co has been at the forefront of a huge upsurge in the category in New Zealand in recent years. The company has steadily increased their range of spirits from all over the world, and Poole was excited to find a distiller making something on a par with some of the world’s best.

He met with Kirichuk and began stocking some of his spirits, and the pair discussed the possibility of producing a gin together.

“We wanted something that was different, that was engaging and stood out from the classic gins we see in the market,” explains Poole.

Poole, along with his sister Tracey Hawes (marketing general manager) and Michael Black, the company’s spirits ambassador, hatched a plan with Kirichuk over some Ukrainian cuisine (zakuski, the traditional custom of serving food with spirits, is very important to the Kirichuks, and features in every tasting they hold).

“We tried some product and began to create the style of gin we were looking for,” says Poole. A cinnamon base was decided on, inspired by one of his favourite gins, the excellently named Professor Cornelius Ampleforth’s Bathtub Gin from Kent, England.

“We wanted to create a great New Zealand gin that was different, that could be consumed neat over ice but also make a great G&T,” Poole says. “The ingredients all had to be natural and of high quality, and Alex is very particular about sourcing the best juniper from Bulgaria and the highest-quality Sri Lankan cinnamon.”

The other botanicals used came from the Kirichuks’ organic gardens, including lemon myrtle, poorman’s orange (also known as New Zealand grapefruit) and feijoa flower, and Gin 133 was born — so named because only 133 bottles per 100-litre batch are produced, each numbered by hand.

But they weren’t done yet. A conversation around the trend for pink gin led to the birth of Gin 133 Raspberry, which Kirichuk believes is the best gin currently produced by his distillery. Each 100-litre batch contains 25kg of raspberries, which works out to around a punnet per bottle — something that certainly shows in its aroma, flavour and colour.

“It’s an expensive way to make gin, but for us there’s no compromise with the quality,” says Kirichuk.

“We want to move the alcohol industry of New Zealand to new level. I think we can say new Zealand produces the best spirits in the world, even if it’s a small quantity.”