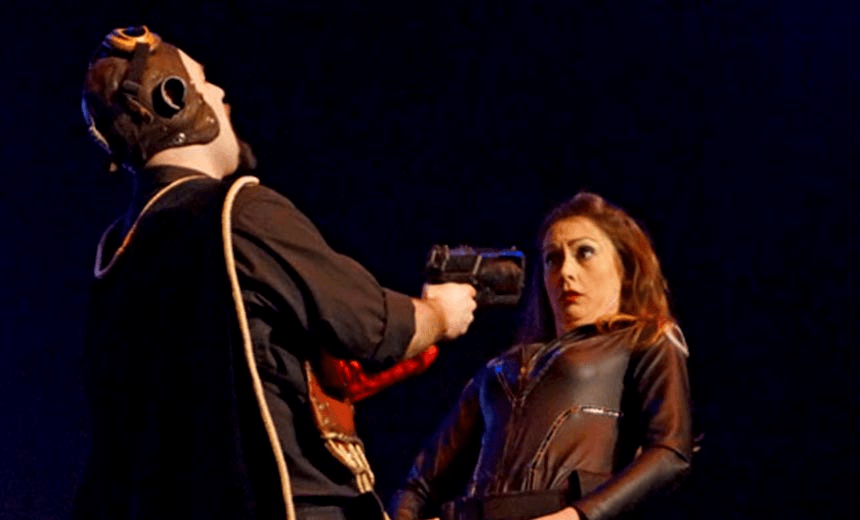 A chat with the director who’s making Hamlet as an on-stage video game. Mind blown.

If Bill Shakespeare was around today, the old huckster would probably have a crack at making a video game. A stage show currently playing in Auckland aims to construct what that might look like, complete with Angry Birds and live Tetris. Eugenia Woo talked to director Greg Copper.

Auckland’s theatre scene is no slouch. With venues a stone’s throw from each other and international acts making the rounds at the Civic Theatre week after week, there’s clearly a keen interest in the medium from aficionados and performers alike.

Enter HAMLET: The Video Game, a stage show that advertises itself as a match made in heaven between the unlikely duo of Shakespeare and video games. Originally conceived as a way to get revive the interest of Kiwi youth in theatre and its artistry, it’s evolved and grown in the hands of Greg Cooper (of MAMIL notoriety) since its first iteration at the Christchurch Arts Festival into the multi-genre, multi-medium beast that storms into Auckland on Wednesday at the Herald Theatre.

Eugenia Woo talked to Greg Cooper about the challenges of producing a one of a kind show like HAMLET: The Video Game, which games keep him up at night, and how theatre snobs need to get over themselves.

First of all, let me ask the question that’s probably going to be on everybody’s minds: Where did the idea of blending Shakespeare and video games come from?

I wasn’t involved when this show was first conceived, but I’m pretty sure it came about from a conversation between Simon Peacock the writer and Craig Cooper, the director of the Christchurch Arts Festival. Craig and Simon are old Christchurch friends and were two of the founding members of The Court Jesters, the improvised comedy troupe that’s part of The Court Theatre. Craig was looking to commission a show that would bring young people into the theatre and thought something that tied into the video game culture could be a good way of doing it. I have no idea why Simon decided a video game version of Hamlet was the way to go, but I remember he was very good at doing improvised Shakespeare scenes back when I was doing Scared Scriptless at The Court in the early ’90s so that may have had something to do with it.

Wrangling the two mediums of games and theatre is tough to imagine as a one-man job. In this case, you had the help of Simon Peacock, who was also the voice director for Assassin’s Creed. Surely his expertise with games impacted on the creative and the mechanical process of directing HAMLET: The Video Game in some way?

His expertise certainly impacted on the script, but when I direct the only people that impact on the creative and the mechanical process of directing are the people around me. I’m also a writer and one of the big things you have to get your head around is when you hand the script over creative decisions are going to be made that are anathema to your instincts. Simon directed the first outing and I’ve directed this one. We’re old friends. This one is different but I haven’t heard from him so I’m pretty sure he’s cool with it.

Could you talk us through putting together a show like this from conception to opening night? I’m particularly interested in whether HAMLET: The Video Game presents any extra challenge because of its unique format and elements that involve audience participation.

This show was conceived, then re-conceived, then re-conceived again in the rehearsal room. Staring at a blank page or screen and starting to write something is terrifying and Simon did that and wrote HAMLET: The Video Game. Lots of people have been involved with this show since then and everyone involved has contributed something valuable and thankfully Simon has been clever and humble enough to take these ideas and embed them with his. There is some audience participation, but the actors doing HAMLET have been doing this forever, they know how to handle an audience member.

As you said, this isn’t the first time that HAMLET: The Video Game has been performed. In fact, what we’ll see in October is the second version of the original play which was first put on in 2015 at the Court Theatre. How has the production changed since then?

We now only have three actors instead of four… this makes it much harder for the actors and much funnier. We’ve stripped back the improv elements as well. We decided if it’s not hardcore Hamlet or video games then it’s not in the show. I also forced in a Tetris scene and a reference to ‘Oh Yeah’ by Yello because I’m in my 40s

Without spoiling too much, can you give us a little taste of what’s going to be in HAMLET: The Video Game? What sort of cheeky references can a gaming audience expect?

There are shitloads of gaming references. I don’t know if they’re cheeky. I played most of my games on a BBC Model B. I got to Elite on Elite and still think it’s the best game ever. I stopped playing games after losing a month playing Civ IV and dreaming about how to solve tricky bits in Tomb Raider 2. Other things in HAMLET: The Video Game: lots of Nerf Guns, strobe lighting, confetti blood, live Tetris, audience-operated Angry Birds and A-Ha ‘Take On Me’ battle scenes.

Theatre can have a reputation for being highbrow, even though Shakespearean works were primarily known for being entertainment for the masses back in the day. Have you encountered any naysayers who think that video games have no place mixing with theatre?

No. But art is theft. Every artist steals from another so every piece of art is entitled to mix with another. People need to get over themselves.

You may or may not be big on games, but can you think of any video game titles that would suit the drama of the theatre? Would the setup and staging of HAMLET: The Video Game lend itself well to other games or would you want to do an entirely new show devoid of Shakespeare for your chosen title?

HAMLET works for Hamlet. I think there are plenty of non-video game stories to tell. Video games are being converted into film so perhaps theatre can focus on something else. Theatre needs to be a live, one-off, visceral and emotional experience between actor and audience. It shouldn’t be exclusive or highbrow, but it can’t reply on other nonexclusive or highbrow mediums to achieve this.

What are some other unconventional combinations that you think New Zealand theatre is ready for? Now that we’ve seen a video game genre crossover, what other mediums out there are ripe for a similar treatment?

I co-wrote a musical about Kate Sheppard and the suffrage movement called That Bloody Woman that blended punk, funk, disco, country, folk, gospel and rock and that worked. But it took Luke and I five years to be ready to write it. People are ready for something whoever writes it is ready for.

Would you like to bring HAMLET: The Video Game to other countries, and if so, which ones?

What’s next on your plate this year? Are there any productions that you’re particularly looking forward to seeing or participating in?

I’m writing a show about animals who died for science that might be called We Died For Science. I’m not sure know how to write it and that’s what I’m looking forward to the most.

HAMLET: The Video Game runs from the 4th to the 7th of October at the Herald Theatre in Auckland.