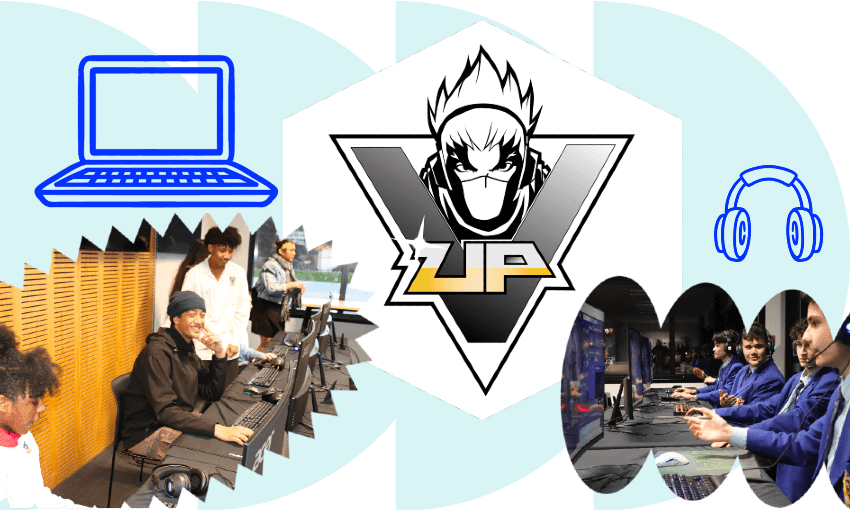 Think esports is not a real sport? Think again. It’s here to stay, and Victory Up is bringing it to high schools near you. (Photos: Supplied, Image Design: Tina Tiller)

Think esports is not a real sport? Think again. It’s here to stay, and Victory Up is bringing it to high schools near you. (Photos: Supplied, Image Design: Tina Tiller)

Esports have been on the rise in New Zealand for years now, and they’re here to stay. Sam Brooks talks to the founder of one leading local platform, who tells him why schools are flocking to competitive video gaming.

Sports in New Zealand schools is on the slide – there are fewer kids picking up the rugby ball or the tennis racquet than ever before. In 2020, School Sports NZ reported that boys’ participation in sports had slipped from 59% to 55% since the start of this century, while girls’ participation dropped from 55% to 47%.

Victory Up is changing that, but not in the way you might think. They’re bringing high schoolers into sport, through esports – live, organised, competitive gaming.

Henry Lawton (Ngāti kahungunu ki Wairoa, Ngāti Kauwhata, Ngāti Paoa) co-founded Victory Up in 2016 with friends Adrian Middlehall (Ngāti Kahungunu ki Wairoa, Ngāti Porou and Fred Glover, who is from Tuvalu. After leaving St Patrick’s Silverstream high school in Upper Hutt, online gaming was the way they kept in touch, and kept their friendship alive. Their game of choice was basketball simulator NBA2K and as they played it began to dawn on them that they were good enough to play competitively. The problem? There were no video gaming competitions in New Zealand.

“We were joining [international] Twitter competitions, Twitch competitions, Facebook competitions, you name it,” says Lawton, now the company’s CEO. They do well in competitions, but they never progressed as far as they hoped, whether due to lack of active participation in the league or cohesive management of the team. Frustrated, “we decided to actually seriously think about what we could do in this space, and what we would do to improve it”. And so, Victory Up grew from a single bunch of friends playing games competitively to a company that enables many bunches of friends to do the same.

Victory Up’s transformation coincided with a surge of interest in esports, both internationally and here at home. Esports have been on a meteoric rise since about 2009, but it took a decade for local news sites like the NZ Herald and Stuff to start reporting on local competitors like Sean “Gratisfaction” Kaiwai, who had earned close to $200k playing Counter Strike. In 2018, Let’s Play Live launched a prominent esports studio in the base of the Sky Tower in Auckland; the next year it purchased Australian rival CyberGamer, becoming one of the leading esports companies in in Australasia.

It was around this time that the Victory Up team transformed their kaupapa, realising that they had a real chance to be an esports trailblazer as a Māori-led organisation working in schools. According to Lawton, it dawned on them that esports was “a space where we had major influence with rangitahi, in the education space, and in health and wellbeing around digital consumption”.

Their first opportunity to broaden their reach into education came last year from College Sport Wellington (CSW), which oversees secondary school sport in the region. “We had an organisation that had traditional sports – netball, tennis, rugby – as their core business, and they wanted to increase participation. They were losing participation every year in traditional sports,” says Lawton. Realising that students were increasingly missing out on the non-physical benefits of being in a sports team – social skills, cooperation, routine, a sense of belonging – CSW invited Victory Up to launch a pilot programme: a League of Legends tournament.

In all, 352 students in the region signed up.

“They played weekly, like every other sport. They practised just like a traditional sport, two days a week, we had a live finals for them. It was brilliant,” says Lawton. Buoyed by its success, Victory Up helped launch the National High School league last year in conjunction with the New Zealand Esports Federation and Meta High School esports in Australia.

The day-to-day work of Victory Up is as much about advocacy and education as it is about competition. They work closely with schools and the Ministry of Education to highlight the benefits to students of  participating in esports. Lawton sees esports as a “golden carrot” that helps get students interested and engaged in the wider digital landscape. “By being part of this competitive space, students can learn the teaching of digital consumption and the imbalance that’s happening there, and we can give power to that conversation for schools. Esports brings that to the table.”

The skills students learn playing esports can carry them into rewarding careers, he says. “With esports comes just about every single job you could think of. It’s very dual purpose.” Even if a student never touches a controller themselves, it’s worthwhile to be involved, Lawton says, pointing out that the manager of a league  will learn invaluable admin, operation, community-building and online moderation skills, and even PR and marketing. “A lot of skills tie into it, and a lot of those skills that people already have, we can pollinate them into esports.”

It’s still frustratingly easy to be sceptical of esports. Much of the non-specialist reporting on it still relies on tired stereotypes of both the games and the people who play them (which is most of us, by the way). The kinds of games that go big in the realm – Fortnite, League of Legends, Overwatch – are quick games, with low investment, and high replayability. They might have low barriers to access but playing these games in a group still has value, just like any social sport does.

If there’s one question Lawton is tired of hearing it’s that old chestnut: is esports really “sport”? “My argument is that Sports New Zealand has recognised it,” he says. “You want to have that conversation, go to them. We may not have the physicality that you have with traditional sports, but the mental attitude, the strategic thinking, the leadership, the communication, it’s all there.”

The image of the isolated, basement-dwelling video gamer has long been incorrect – gamers are as social as anybody, and often use the platform as a way to socialise. Lawton knows from his experience in schools that many teachers are worried about how video gaming is impacting  kids’ social skills. Such worries are overblown, he says. “I guarantee you that kid’s got 100 plus friends they talk to daily. They know how to tell a joke, they know how to tell an amazing story. It’s just not in the method that we’re used to.

“They’re there connecting with people all over the world, they’re learning some valuable life lessons in that space and, realistically, especially for parents, that’s where we need to be engaged with them.”

When Lawton talks about the future of Victory Up, and the future of esports, it’s with the kind of fervour that many of us more readily associate with coaches talking about their athletes. “If you talk to a lot of us in the industry, we’ll all tell you we’re the best gamers in the world and we’re all looking to present those opportunities to our gamers in Aotearoa.”

He’s also excited by the opportunities in esports for Māori and Pasifika. “I don’t think we realised until last year that all of the top players in this space are Māori-owned organisations or Māori-led organisations with Pasifika links as well. It’s very strange when you look at the history of Aotearoa with all these other sports – they’re normally Pākehā-led, and everybody else has to catch up to them.Whereas in this space, we’ve gone, ‘look, we’re here, let’s just lead this space and everyone else has to jump onto the way Māori do things’.”

For Lawton, it comes back to the kids, and especially their parents, being open to the idea of esports as a legitimate sport. It’s all about taking a genuine interest in what your kid likes doing, he says – textbook good parenting, but likely easier to comprehend if your kid is into rugby or theatre than, say, Fortnite or NBA2K. “You’ll be surprised how much five minutes of sitting down and asking about a game is actually going to impact on that relationship.

“You don’t have to like it, you don’t have to understand it, but it’s for your child. It’s about them knowing that you’re there, you’re interested in what they’re doing.”