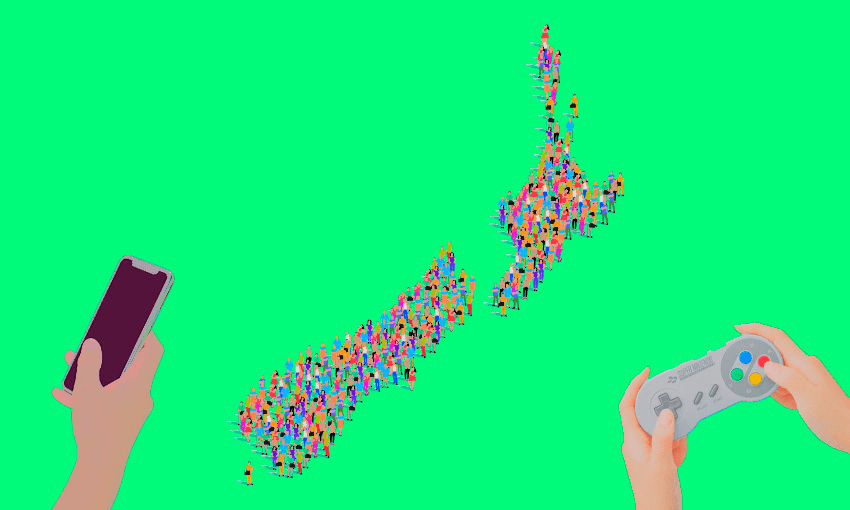 Face it: We live in a gaming nation, and it’s time we start realising it. (Image: Tina Tiller)

Face it: We live in a gaming nation, and it’s time we start realising it. (Image: Tina Tiller)

From multi-player RPGs to that free mobile game you play while waiting in a queue, gaming is everywhere. And a new report confirms that in New Zealand, gaming is only getting bigger.

If you’re reading this article, there is a 100% chance that the device you’re reading it on has the ability to play a video game. Whether it’s old standby Candy Crush, a triple-A game released a week ago, or a port of the biggest RPG of all time, a video game of some sort is only a finger tap away.

The latest Digital New Zealand report by Australia’s Interactive Games and Entertainment Association tells us just how many New Zealanders playing those games, how long they’re doing it, and why. Spoilers: the stereotype of the lonely boy playing alone in his parents’ basement is wildly incorrect and out of date.

I spoke to Dr. Jeffrey Brand, professor at Queensland’s Bond University and co-author of the report, about the findings and asked him to expand on what a few of the more interesting results tell us about gaming in New Zealand.

Video games are getting more popular

Put simply, 73% of us, or more than 3.7 million of New Zealand’s 5.1 million residents, play video games. If you break it down by age group, those numbers become even more stark:

That 73% figure is a marked increase from the two thirds who reported playing games in the last two reports, published in 2019 and 2017.

If you want a crude comparison, ActiveNZ reported in September of 2020 that 76% of adult New Zealanders, and 94% of children aged 5-17, participate in sport.

Interestingly, 76% of New Zealand's gamers play socially. “Only 24% say, 'No, I only ever play alone'," Brand says. "This medium, because it requires communication, it also requires coordination, it involves competition, it has epic wins and dismal failures.”

Gamers are getting older

The average age of people who play video games in 2021 is 35, up from 34 in the previous two studies. When this research series began in 2010, the average age of a New Zealand gamer was 32. The steady increase reflects both the ageing population of New Zealand and the older adults who are discovering gaming as the options – both platforms and types of games available – continue to multiply.

Almost as many women play as men

The long held stereotype is that gaming is for men (those aforementioned lonely boys), but these days the gender breakdown is more or less even. Just shy of 52% of New Zealand’s gamers are men, 48% are women, and less than 1% identify as non-binary (the first time this has been measured). This is a 4% increase in women players since 2010.

Brand says: “What’s happening is that when you get into that age bracket, as a woman you’re probably working, and you’re just as likely to have kids that are adults and you’re not doing everything for them. You probably have a bit more time on your hands and there’s this opportunity.”

While this happens in other countries, it happens at an earlier age in New Zealand and once women overtake men in the amount of time they play, they stay there. “They basically own video games amongst the older age groups, and they play as much as younger women before work.

Most households have a gaming device

Video games are available to be played in 1.6 million New Zealand households – 92% of all homes. While that's an increase from 88% when the report was first produced in 2010, the proportion has stayed stable for the past decade.

Of those 1.6 million households, 75% have two or more game devices. Somehow, 6% of households have six or more devices.

Mobile phones are the console of choice

Perhaps unsurprisingly, the most common device for playing games in 2021 is the one that we have attached to our body most of the time: mobile phones. Phones make up 66% of the gaming devices in our households, with the reliable PC coming in at second place with 60% – New Zealand is an outlier here, one of the few countries where PC gaming has dominated since the early 2000s – and dedicated consoles trailing at 50%. Almost 42% of the households with gaming devices use a gaming subscription service, like Playstation Plus or Game Pass.

During the pandemic, gaming became the second most popular form of entertainment

Participants in the survey were asked to rank different forms of media for “getting through” the pandemic. For the first time ever, video games ranked in the top three, coming in second after streaming TV and movies. Free-to-air TV ranked third, followed by YouTube, music, social media and books in that order.

Says Brand: “What that tells me is that games are this amazing tool to transport us to other places and other experiences. And during a pandemic, that’s really important that games have that ability.”

The pandemic changed how we game

Did you play Among Us with your hellspawn to keep them sane over the past year? You’re not alone. Up to 76% of parents played games with their children occasionally during the pandemic. Of those parents, a third said they’d used games to help their children cope with the pandemic, and a quarter said they used games as a virtual form of “travel”.

Brand notes that historically parents have generally played games as a way to connect with their family, usually because the child asks to play games with them. However, this flipped during the pandemic. “Now what we’re seeing is parents who have been playing games for years. They themselves as kids played video games, and they want to share that joy with their kids.” He uses his own family as an example – he was in lockdown with his wife and three sons, and they would play Minecraft together.

As well, 31% of New Zealand’s gamers said they expected to be playing more after the pandemic, while another 31% used games to communicate with their friends. And on that note...

Gaming is not a solitary pursuit

This is the finding that Brand thinks is the most important takeaway from the report. It disturbs the current, incorrect, image of gaming as an anti-social activity. In fact, the opposite is true. “Video games are social, and we’ve got to stop thinking of them as this electronic separator. They’re not, they’re an electronic combiner. It really brings us together, gives us purpose together.

“If games are this great opportunity to connect, if we’re connected by games, that’s something we need to celebrate more. If we do that, we’ll actually get more out of them.

"If we think about them as an opportunity to be together, and be closer together, we could probably solve a few problems.”

This report was presented as part of the Digital New Zealand 2022 conference with IGEA (Interactive Games and Entertainment Association). “Data reported here come from 800 New Zealand households and 2,270  individuals of all ages in those households. The margin of error is ± 3.5% for the national sample comparing households and all household members, ± 3.9% for adult players, ± 2.9% for key players, and ± 2.1% for all players.”