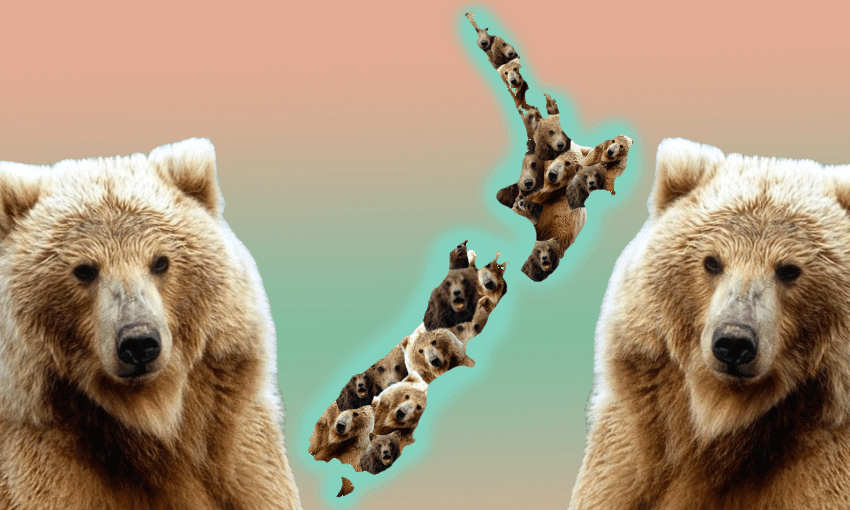 Beware the bears: We play the Turkish video game ‘set in New Zealand’

“An adventurous TV presenter goes to New Zealand. The adventurer who encounters with unexpected events will have to struggle for life against wildlife.”

That’s the log-line for Ka Mate, a survival game that’s just hit Steam Early Access. It’s the first project for Turkish developers 2645turquoise, but it’s an ambitious one. The developers promise a vast survivalist adventure across the North and South Islands in which you build shelters, hunt for food and tame the unforgiving New Zealand wilderness. By the time it releases, the developers say, it’s going to have vehicles, farming, villages and more. It’s a baby game right now – the build I played, the build that’s being sold on Steam, is version 0.1.2 – but when it’s done, the developers say it’ll be a “unique game pleasure with New Zealand’s natural habitat.”

Which doesn’t really explain why I got killed by a bear.

Ka Mate isn’t really what it says on the tin. You play as Sean, a washed-up Bear Grylls-style TV personality who’s trying to relax in Hawaii when a mysterious man tells him about a mysterious people who lived in New Zealand hundreds of years ago. Sensing his ticket back to the big time, Sean hooks up with some unscrupulous sailors who agree to take him ‘illegally’ to this mysterious ‘New Zealand’ (“It was a rather expensive option but it was the fastest.”). A week later, the sailors abandon him on a mysterious Pacific island called Jarvis. I respect their decision. His diary makes a pretty good case for him being a raging blowhard IRL.

The player takes over from there, trying to keep this dickhead alive on an uncharted island that looks eerily like a forest in the middle of Oregon. It’s rolling hills and pine forests as far as the eye can see, and there’s next to no water – just one little marsh right next to where you start. This all looks pretty beautiful in the dawn light, in an ostentatious Malick-and-a-half kind of way.

The island’s full of all-American wildlife, too. You hunt rabbits and deer – so far, so local – but at night you’re hunted by the island’s apex predators: stags and bears. There’s constant birdsong during the day but I couldn’t identify in that dawn chorus any birds native to the Pacific region. I’ve asked around – I’m not super-great at identifying bird calls – but the closest anyone’s gotten is picking out a quail in the mix. Maybe the bears eat the quails. I don’t know. The bears are there, though, and they’re beary, beary angry.

(A quick sidenote: there is actually an island in the Pacific called Jarvis. It’s just under 5km2 of sand and coral. There are no trees, no deer and absolutely no bears. It sucks.)

We should probably cut 2645turquoise some slack on this. Ka Mate’s in alpha; it’s rough, unfinished, full of placeholder assets and bugs. My first playthrough ended with Sean dying of thirst after a straight day of walking to find the edge of the island; my second ended when the Building Menu broke and froze the game. On top of that, Ka Mate also plays identical to Rust, The Forest, and every other wilderness survival sim out there: hunt for food and resources, craft tools, build a base and try and survive until the endgame. It’s totally unremarkable, and it not really giving a fuck about getting the Pacific right is just one part of that.

It is pretty funny to think about what Ka Mate might be in two years time: a spectacle crossing the North and South Islands, a complex ecosystem with farming and villages and an economy, tied together not only by a narrative but by bears. Bears in our national parks, living in harmony with kereru and kiwi. Bears rolling through Franz Josef after hibernating for the winter. A New Zealand just stacked with heaps and heaps of bears.

But, on the other hand, if they’re this blasé about whether bears live in the Pacific – well, let’s back up a bit.

In May last year, Ka Mate got through Greenlight, Steam’s now-defunct initiative that let users vote for the indie games that they wanted to see sold on the Steam store. Back then, 2645turquoise wanted to tell this story in their game: Sean was going to New Zealand to find the place where Ngāti Toa chief Te Rauparaha composed Ka Mate. Ka Mate’s version of this origin story is pretty much a complete bastardisation of the haka’s real history:

At the head of the pit, [Te Rauparaha] saw a warrior leader covered with body hairs waiting for him. But when he gave his freedom instead of killing him, Rauparaha also began to dance with the words of Haka dance, which unchanged day by day, by coming out of the pit. He also vowed to take revenge from those who want to kill him, with this dance. The song ends with the fact that the “haired man”, that is, the enemy, showed mercy, gives the daylight once again and Te Rauparaha reached to the sun by stepping up from the dept of the pit step by step. Te Rauparaha then taught this dance to all the Maori, and before all the conflicts they entered, tribal members began to make Haka to frighten their enemies.

Yeah, sure, this is an alpha build, it’s still in the early stages of development, all that stuff I just said. Maybe a year down the line, Ka Mate will patch in a story about that haka that’s accurate and well-told and doesn’t turn Māori into a homogenous group of pre-Enlightenment boogeymen. But if you tell everyone your game is set in New Zealand and then it boots up a Pacific island that has bears and no water and an endless horizon of pine forests and rocky rolling hills?

I mean, it’s not exactly promising.

That’s not to say it’s not salvageable. There’s the stuff they already know. Their developer roadmap says they’re aiming for “more impressive and refreshed game mechanics, better sound” and a “better interface”, and they’re actively responding to players who are running into bugs and crashes.

But also, 2645turquoise could reach out to Ngāti Toa, to Māori artists and storytellers and developers, to work in partnership with them and make sure the story that they’re telling doesn’t exploit and monetise those ugly colonial stereotypes about how Māori were primitive and hyperviolent people before the British came along. They could do the research, do the work, talk to people. That’s the absolute least they could do. It might even save them from legal action if they try to use Ka Mate in a later build –

If you do not attribute when required, Ngāti Toa Rangatira may obtain a court declaration stating that you were required to comply with the Haka Ka Mate Attribution Act 2014 and ordering you to comply. If this occurs the court may make an award to Ngāti Toa towards their costs of having to bring the legal proceedings.

Or maybe, if they’re not interested in telling it right, they could just decide not to tell this story, delete it from the roadmap. Because it’s pretty gross to, from the other side of the world, build a game that twists the origins of Ka Mate into spoooooky survival horror. They shouldn’t delete the bears, though. I really love those furry guys.