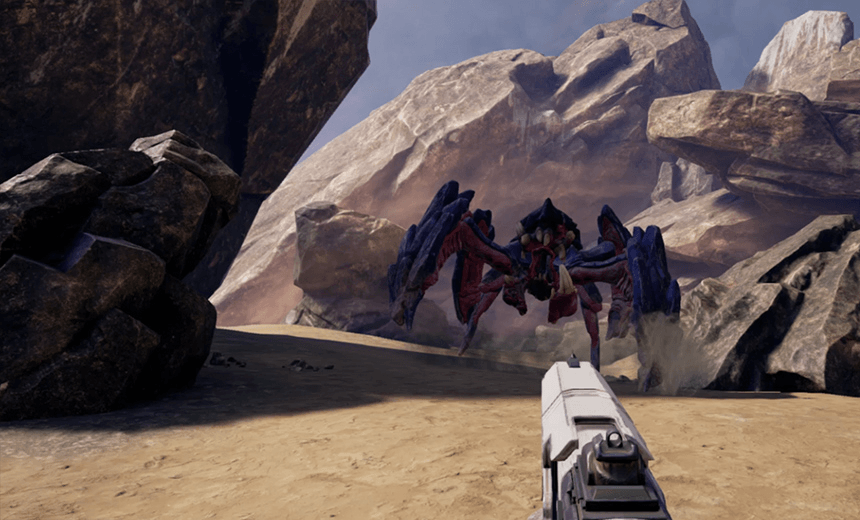 Finally: Farpoint proves PSVR is more than just a gimmick

PlayStation have made a major play in the VR department, releasing the first AAA-quality game bundled with an innovative new controller to boot. Don Rowe straps on his goggles and goes alien hunting with Farpoint.

As the initial joy of finally – finally – experiencing virtual reality in my own home wore off several months back, I found that the most fun I could realistically have with the PSVR was in fact watching other people experience it themselves. They watched the screen and I watched them laugh, shriek and generally trip balls – great fun, but hardly the transcendent and revolutionary technological medium poised to change entertainment forever. Harrumph, said I.

But, like old mate Gollum said – “patience, patience, my love”. Virtual reality is still in its infancy, particularly so in the commercial arena. And this wee techno-babe might have just taken its first steps with Farpoint and the Aim controller.

The Aim controller is the newest member of the PSVR family, a minimalist, stylised weapon with ergonomic inputs and motion tracking capabilities. It might as well be shaped like a needle full of adrenaline because the Aim is exactly the sort of supplement that PSVR needs to continue its rapid ascension atop the growing pile of consumer VR hardware.

Up until this point, earlier PSVR titles felt much more like tech demos than fully-fledged games. Fun, sure, but after a while one starts to think “Okay, I know what the hardware can do, but what can it do?” Farpoint is the first time I felt as though I was playing a real campaign and not just an ‘experience’, valid only for its novelty. And a lot of that is down to the Aim controller, which founding developer Seth Luisi helped design in conjunction with Sony’s team in Japan.

With two of the typical joystick inputs gamers are accustomed to, plus a full d-pad and the classic triangle, circle, square and x buttons all within reach of the player’s thumbs, it’s a triumph of design – even if it doesn’t look like the sort of thing a grown adult should own, or display outside the bedroom.

In-game that’s irrelevant, however, as the appearance is obviously whatever the developers want it to be. And in Farpoint, the first of what I would consider AAA-quality VR games, this weird plastic mock-up somehow manages to feel just like an assault rifle, or a rocket launcher, or a rocket-launching assault rifle. While the motion tracking mechanism does look pretty silly, it actually works, and shooting is a remarkably intuitive and accurate experience – until you turn your back on the camera. Welp.

The Aim controller aside, Farpoint makes clever use of space – both in a physical sense and a ‘Star Trek’ sense. Low ceilings with closed in walls and dark depressions on either side invoke intense claustrophobia, and walking across an endless crevasse on a tiny spur of rock had my thighs literally twitching with vertigo – or something. Pair these effects with decent headphones and the immersion is unparalleled, and occasionally terrifying.

It’s in the game’s opening scene however that one of VR’s most significant capabilities is demonstrated best. Within the first five minutes, drifting above an interdimensional anomaly in the shadow of the Red Planet, it was apparent that we’ve turned a corner, so to speak. The ability of VR to render objects to a lifelike and gigantic scale (no, they’re are not mutually exclusive) means incredible scenes with a real visceral sense of the immense size of things. Although this turned out to be one of the most visually impressive scenes of the games six hour campaign, it was far from the only moment which made me more confident in my stance as an early proponent of the system.

Shortly after being sucked inside the anomaly and spat into the dust of a planet billions of miles from earth, a volcano dominates the majority of the player’s viewpoint, towering thousands of metres into the sky, bilious smoke issuing forth from it’s flaming blue interior. Tracking the plume to its inevitable dissipation into the alien atmosphere means actually moving your head, following the smoke and eventually, craning, seeing it drift into the sky. The implications for industries outside of entertainment for representing real objects at large scale were immediately apparent.

This twisting of the nature of space and scale are equally as relevant when it comes to the considerable array of enemies in game. From tiny facesucker-arachnids to heavily armored poison-spewing arachnids, the sheer size and weight of the alien beasts lends a little more legitimacy to their giant fangs and heaving thorax’. And that’s not to mention the army of mechs.

While lead developer Seth Luisi is most proud of the narrative of Farpoint (read my interview with him here), I would argue there is nothing particularly groundbreaking in the story of a couple of lost astronauts and the struggle to bring them home. In fact, an earth-based narrative with human enemies may have ticked all the same boxes and more. But it is the way in which Farpoint has bridged the gap between tech demo and fully-fledged game that really makes this a must-play for the virtual connoisseur. This is less to do with the story and more to do with realising the potential of the hardware with which they’re working, and which they helped to design.

We are still in the very infancy of VR, and perhaps at a time when the graphics are closer to some semblance of photorealism this leap forward in control mechanics and game design will combine to create the immersive experience that PSVR is poised to be. Whatever the case, Farpoint is a major step in VR joining the mainstream of entertainment mediums, and PlayStation will be glad it’s on their system.