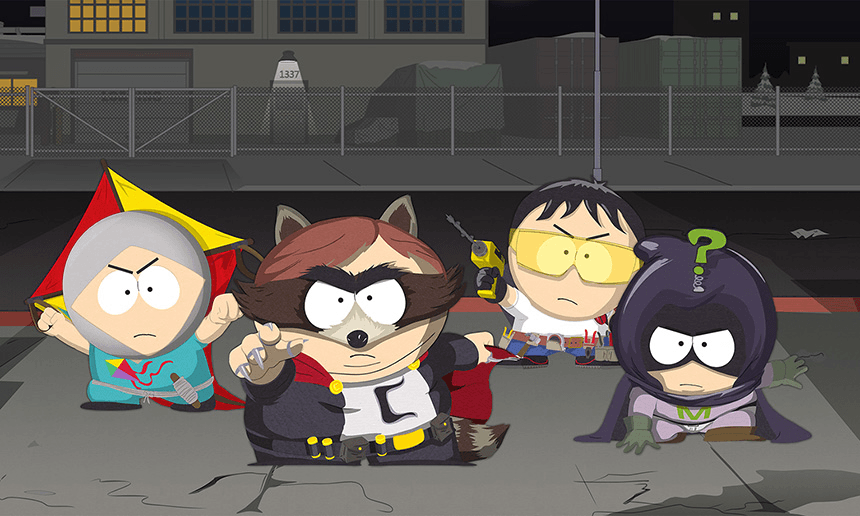 The new South park game is a depraved ride, but it is funny

Twenty-one seasons in, South Park seems reluctant to die – and the intense licensing of the IP is no different. Don Rowe take the new video game version of everyone’s favourite depraved cartoon for a spin.

I’m always nervous when franchises are ported across mediums. Not every show is fit for a game and vice versa. Gimmicks and themes aren’t necessarily transferable and it can feel a bit gratuitous trying to shoe-horn aesthetics across platforms. But while South Park: The Fractured But Whole isn’t the studio’s first attempt at a video game, it’s easily the best and most faithful to the spirit of the original text. In fact at times the lines between show and game are blurred, and it becomes equal parts video game and viewing experience.

Unlike the borderline demonic 3D rendering of games like The Simpsons Hit and Run, South Park is recreated in exactly the same art style as the show, down to the penguin-hop movement and segmented Canadian heads. This creates some problems however: hopping is an incredibly slow way to get around town, and the depth perception on a 2D image is much more difficult than it needs to be. This problem affected the recent Crash Bandicoot remaster though so it might be more of a problem with the camera angle.

In combat however it’s irrelevant as battles revolve around a turn-based tile system, with movement defined on a grid. Strong RPG elements like different classes, abilities, status effects and so on beef up the intricacies, all thematically relevant to the show – sometimes to the extreme. But where the previous installment spoofed on Lord of the Rings, Game of Thrones and general high fantasy, this time it’s superhero culture in the firing line, and so the characters and their combat abilities reflect that. So too does the crafting system, but to be honest the less said about that the better. Suffice to say it’s skeletal and mostly a bolt-on.

The game is clearly targetted at long-term fans: the characters are barely referred to by their real names and a general familiarity with the material is behind many of the jokes. The thing is, people who’ve been watching for 20-odd years are by now some seriously sick (and desensitised) individuals. In the first couple of hours of gameplay I was peed on, farted on, sexually assaulted and whipped by a priest with a lash of crucifix-adorned anal beads. If you find the show distasteful and generally don’t get too barred up for toilet humor, you are going to hate it.

Crass it may be, it’s also for the most part very funny. There are few if any video games that have made me actually LOL, proper barks too – none of this stoner huhu doofus laugh. Beyond the general hilarity of characters like Randy Marsh (easily, easily televisions funniest dad), it’s the small details that catch you by surprise – satirical advertisments, jabs at pop culture, mockery of fandom and the very act of gaming itself. These moments are where SP:TFBW shines, though admittedly some of the jokes do fall flat, and lazy writing and fart jokes reminiscent of some of the shows more recent seasons eventually accumulate enough to mar what is otherwise a comedic gem.

There are moments of confusion too, especially when you consider that South Park creators Matt Stone and Trey Parker are acid-gobbling nihilists, guys who seem to believe the lamest, most unforgivable sin is to ascribe meaning or to care about anything. Clunky features like Coonstagram, an in-game Instagram parody, requires selfies with the NPC’s who roam South Park in order to advance through the game, and it’s hard to say whether it’s some meta inside-joke, or just a hacky design. Whatever the case, I’m yet to play a single game that institutes social media in a way that isn’t absolute trash tier. The first South Park failed, and so did this one.

It’s a minor flaw however. The framework of gameplay and mechanics is enough to support the tapestry of story and set-piece, both of which combine for an engaging narrative and opportunities aplenty for a good old ribbing. SP:TFBW is unlikely to bring swathes of fence-sitters or Family Guy diehards over to the dark side, but for fans of the show it’s like all the best parts made interactive, with gameplay robust enough to justify not just scrapping the mechanics and making this a movie.

If you like the show, you’ll love the game, and if not, well: