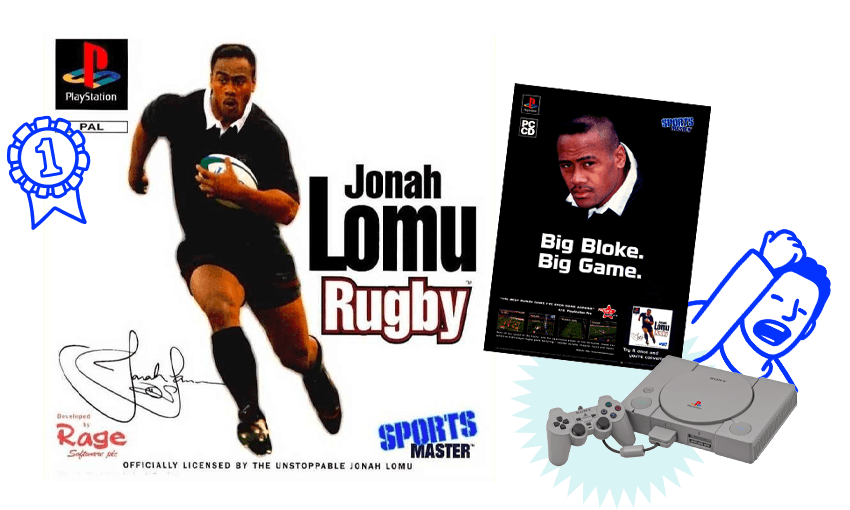 What made Jonah Lomu Rugby on the PS1 so good – and why has no other rugby game come close to recapturing the magic in the 25 years since it was released?

Demented moles. Ballydown Park. Laksanasongpong. This collection of words might sound like nonsense to anyone under the age of 30, but to a generation of gamers and rugby fans, every syllable will make perfect, beautiful sense.

This is the language of Jonah Lomu Rugby for PlayStation 1, which first hit New Zealand consoles 25 years ago and remains the beginning, middle and end of the conversation about the best representation of footy on a gaming console, with a timeless quality and cult status seldom seen among sports video games. It’s such a national treasure there’s even a copy in Te Papa.

But as we celebrate the game’s milestone birthday, we also need to ask the question: why, in the quarter century since its release, has no other rugby game managed to recapture Jonah Lomu Rugby’s magic?

When the game arrived back in 1997, the All Blacks had just won an historic series against the Springboks with a side considered to be one of the greatest ever. Undoubtedly the biggest name in that squad was Jonah Lomu, who had bulldozed his way to becoming rugby’s first truly global star. Along with his endorsement deals with Reebok and McDonald’s, it seemed natural for him to have his own video game, developed in the UK by Rage Software and published by Codemasters, whose previous hits included Pete Sampras Tennis and Brian Lara Cricket.

All Blacks winger Jeff Wilson was 24 years old at the time of Jonah Lomu Rugby’s release, and remembers seeing himself portrayed in a PlayStation game as being “pretty funny”.

“I was lightning quick in the game, but any time anyone got near me I bloody dropped the ball. I had to laugh, but I didn’t take offence to it because I’m pretty sure I was the fastest player. No one could move as fast as me.”

It paid off on tour for Wilson and his teammates as Lomu would always have a PlayStation on hand. “We gave it a crack, some of the boys were really into it but we all gave it a go. There hadn’t really been a game that had captured rugby at all. It was the big fella’s game, but all of a sudden players from all over the world were getting put on a stage like that. Gaming was a part of the professional era, we all got used to it pretty quick.”

Part of Jonah Lomu Rugby’s charm was its licensing workarounds – the game’s main stadiums were Ballydown Park (Ballymore) and Tallyfield (Twickenham). It also included a host of lesser rugby nations like Hong Kong, Germany and Thailand, whose first five Laksanasongpong became something of a cult hero among the game’s fans. But Lomu was of course the game’s most potent weapon, with the ultimate challenge being to take on an entire team made up of 15 clones of the legendary winger.

Jonah Lomu Rugby’s playability ensured the game remained popular at the start of the new millennium, when a young Brad Weber would regularly play with his brother and mates. “Honestly, Jonah Lomu Rugby was my favourite game,” the All Blacks halfback remembers. “I had the package deal that came with Shane Warne Cricket 99 as well. We’d spend hours upon hours on it.

“I was already a pretty keen footy player but this took it to another level. My favourites were the special teams, the Rage All Stars with the winger Mather. He was tiny but fast, so I could see a bit of me in him.”

Weber says he still remembers all the button combinations for fending and offloading, but the part of the game that sticks in his memory the most is the legendary commentary provided by the late, great Bill McLaren and current World Rugby head Bill Beaumont (the Lomu-sized irony being that the governing body has long been criticised for not investing more heavily in gaming, with the issue forming part of the last challenge to his leadership). McLaren’s references to halfbacks “digging like demented moles” and forwards “marching up the field like a bunch of Sherman tanks” have even spawned a tribute Twitter account.

“‘That’ll put him in ward four’ … ‘I hope not Bill, that’s the maternity ward!’” Weber recites with a laugh. “As a kid I had no idea what that meant, but I knew it was funny somehow. Even now, when we’re out on the golf course and someone skies a tee shot, we all shout ‘that’s a huge Garryowen!’”

Most fans agree the reason Jonah Lomu Rugby stood the test of time is that it made a complex sport easy to understand and play. It embodied what the vast majority of rugby fans want to see in the game in real life: there are no substitutions, most penalties and other hold-ups are stripped away, mastery of offloading is critical and kicking in general play is almost always pointless. The old adage of rugby being 14 players trying to make space for the 15th to score is the key to success.

Which is why it’s baffling that follow-up attempts at rugby games have taken the opposite approach and overcomplicated the gameplay. Only EA Sports’ Rugby 08 has received anywhere near the sort of love shown to Jonah Lomu Rugby, but despite being made a full decade later, it still hasn’t aged as well.

If there’s a game studio that can finally catch lightning in a bottle again, it’s probably right here in Aotearoa, according to the NZ Game Developers Association chairperson Chelsea Rapp. “There’s no question that New Zealand has the talent and the skill necessary to build a high quality rugby game.” she says. “Our studios have shown that they’re leaders in the global games industry. In fact, earlier this month, our largest game studio PikPok announced that it’s launching two games on Netflix.”

Rapp says the local game industry is growing on average 38 percent every year, and there are now more than 60 studios and over 1000 people who work in game development full time. “Currently the only limit to this growth has been the ability for studios to access highly skilled talent and early-stage funding. New Zealand is unmatched in our passion for the sport, so it’s safe to say that if NZ Rugby chose to make a game, several studios here would be keen to be a part of it in one way or another.”

When asked about the possibility of a remake, NZ Rugby’s chief commercial officer Richard Thomas said they “have not explored this at this time but we are aware of its popularity for a certain generation of gaming enthusiasts and rugby fans.”

“We believe an ongoing and likely increased investment in marketing our brands to fans globally is a critical part of rugby’s future, under any scenario. While we haven’t had specific discussion as to how gaming may relate to that, we do have a very strong view, shared with Silver Lake, that digital experiences which connect with our fans in new ways are a key part of the future.”

Given the amount of cash about to start flowing into NZ Rugby from Silver Lake, it seems like a direction worth exploring. After all, the generation captivated by Lomu’s deeds both on the field and on the PlayStation are grown up now, ready to transfer that passion to their kids. Jeff Wilson, now a commentator with Sky Sport, says it’s a no-brainer.

“It should be a focus for NZ Rugby to grow its own version of NBA2K, because that’s how the next generation consumes their information. My son can tell me more about the NBA than I can tell him, because he plays 2K and it connects the present to the past. He knows about players who played in the 70s and 80s because it’s all on 2K, all their characteristics and stats.

“There hasn’t been another rugby game like Jonah Lomu Rugby. If they (NZ Rugby) truly want to connect with a generation of gamers, they need to create another game that is world class. It’s something that rugby definitely needs.”