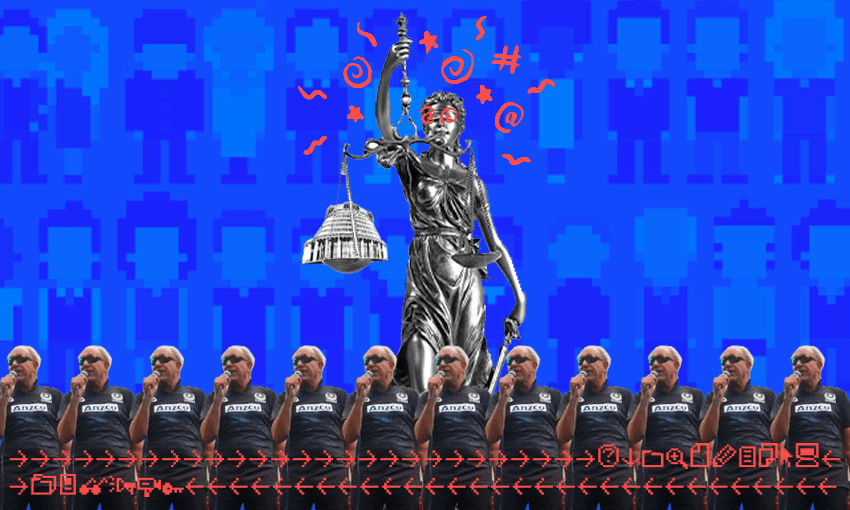 Brett Power’s attempt to perform a citizen’s arrest of Andrew Little may seem like the actions of a fringe extremist, but international precedent suggests we haven’t seen the end of such tactics, writes Dylan Reeve for IRL.

On Wednesday last week, while the vibes at the parliament protest were still pretty chill, there was a clash between police and a small group of protesters. During this altercation police arrested Taranaki man Brett Power as he attempted to break through their cordon and gain access to parliament.

His aim? To perform a citizen’s arrest of health minister Andrew Little.

Power’s mission had begun the previous week when, after having filed a complaint with the high court in New Plymouth, he gathered like-minded supporters in front of the police station before making his way into the building to file what he described as a “charge sheet” against Little. It was a demand that  police arrest the minister for murder based on the vaccine-linked death of Rory Nairn; the reasoning being that he’d authorised the vaccine (not really a vaccine, according to Power) for use based on information that Power asserts was knowingly falsified.

The police, unsurprisingly, did not arrest the minister of health at the direction of the one-time district council candidate. Power’s court filing had demanded Little’s arrest, the revocation of all Covid-related legislation and rules, as well as the dissolution of the government by the governor general. But the court, on the day after Power’s own arrest attempt failed, threw out his complaint, with a judge finding that it was effectively meritless.

Power wasn’t alone in his unusual legal efforts: a Taumarunui woman, Ann Tweedle, filed a complaint with her local police around the same time as Power, in which she demanded the arrest of the prime minister and deputy prime minister on allegations of murder and crimes against humanity. So far, there doesn’t appear to have been any movement on that case either.

But if you think that’s the end of Covid protesters trying to use the legal system (or some legal system) against the government and its officials, you’re probably going to be disappointed. It’s highly likely, based on overseas precedent, that there will be future quasi-legal endeavours, and maybe even more attempts at citizen’s arrests.

Around the world, there have been countless attempts to use convoluted legal manoeuvres against governments and officials in response to Covid measures. In many cases, the established legal system is side-stepped entirely in favour of highly dubious legal alternatives such as the idea of “common law” frequently cited by sovereign citizens. Such attempts have included doctors and pharmacists being issued “cease and desist” letters, high-profile vaccine promoters “served” bogus legal documents, demands police shut down vaccine centres and even an attempt to arrest (kidnap) a school principal.

In some ways, Power’s attempt to use the traditional courts and the police force was an unusual aspect of what he was trying to do. The international examples he seemed to be following tend to lean more heavily on alternative interpretations of law and self-proclaimed enforcement powers, such Christopher Key of the so-called “vaccine police” who has threatened that he, and a small group of supporters, will arrest public officials and vaccinators in multiple US states, warning that they face potential execution.

With Power’s appeal to the mainstream system rebuffed, it seems likely that he or others will conclude that some other authority will need to be relied upon to address the matter.

It’s a very widely held belief among Covid-related conspiracy communities that there will be some form of tribunal established to bring to justice all those who’ve been involved in the international Covid response, including politicians, scientists, medical professionals and the media. However, the problem for believers is that nothing has happened yet. There’s no sign of arrests, and increasingly people are starting to suggest that they may need to take it into their own hands.

As the traditional legal system in Aotearoa continues to reject spurious claims against Covid measures and those who created them, opponents of the policies increasingly look to alternative ideas such as “sovereign citizen” legal theories. Sanjana Hattotuwa, a research fellow with Te Pūnaha Matatini’s Disinformation Project, has watched these ideas grow locally. “Sovereign citizens has been identified as an ideology of concern by the FBI in the United States as far back as 2010, so it’s not new in that regard,” said Hattotuwa. “But what Te Pūnaha Matatini has seen [locally] is that there has been an explosive growth in relation to the pandemic and in the anti-vax community.”

There have also been multiple “courts” established around the world that have asserted imaginary international jurisdiction and issued rulings which are then used by self-appointed “common law sheriffs” to take what they claim is lawful action under international warrants against officials and vaccination operations.

These supposed precedents have been frequently cited in New Zealand Facebook and Telegram groups dedicated to opposing the government’s Covid response. “I don’t see a discernible difference in the volume or velocity of content around common law and sovereign citizen frameworks,” Hattotuwa explained, comparing Aotearoa to overseas. “Where I do see a distinct difference is the offline action,” where these pseudo-legal arguments have informed efforts to close vaccination centres, confiscate vaccines and even “arrest” officials internationally.

“I track these things in the United Kingdom, and Canada, and in Australia,” said Hattotuwa. “It is happening all over those countries, but it hasn’t happened here much… yet.” However, as other options are exhausted, it seems all but inevitable that New Zealanders convinced by these ideas will attempt to enact them locally.

Among some Covid protesters, who were hoping Power’s appeal to the court and police would see Andrew Little brought to justice, the rebuke from the court has cemented the idea that mainstream legal avenues are pointless and aligned against them. It’s a development that could well see small groups of protesters showing up at vaccination sites and medical centres asserting their own “common law” powers while waving paperwork and insisting they have the legal authority to confiscate vaccines, as has happened in the UK.

Fundamentally, believers in these ideas are convinced, to some degree, that the international response to Covid is an organised move toward global tyranny, and that the vaccines themselves are a mechanism of literal genocide. People who believe those are the stakes feel increasingly compelled to act.

So far in New Zealand, that action has largely been by waving signs and shouting, but some may soon feel that more must be done. There are plenty of groups locally and internationally willing to provide an imaginary quasi-legal basis for action. If international examples are anything to go by, we could be in for a wild – and legally dubious – ride in the near future.