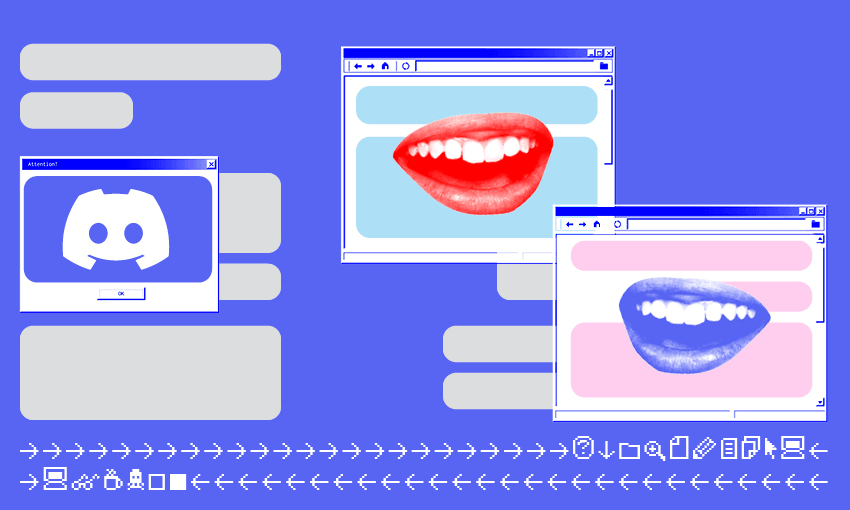 Why Discord could be the future of the social internet

When an app for gamers goes mainstream, it raises as many possibilities as it does problems. For IRL, Shanti Mathias explores the pros and cons of Discord servers.

It might be the only way to know what your favourite influencer is up to, or the best bet for reviving the groupchat in lockdown. The app Discord was originally designed for gamers to coordinate attacks on enemy castles, or whatever it is that gamers do. Now, though, the platform has over a hundred million users around the world, who use it for everything from communicating with friends to, uh, communicating with Nazi friends.

Discord works like this: as an individual user, you can send direct messages to other users, as well as call or video chat with them. You can also create or join servers, virtual “rooms” multiple people can occupy, which can be separated into further sub-categories with functionality similar to workspace app Slack.

Because it was initially designed for use while gaming, the screen-share function is particularly smooth, ideal for a group movie night or game of Among Us. “If you look at the branding and marketing, [Discord] has gone from the place for gamers to the place for anybody,” says Kevin Veale, a lecturer in media studies at Massey University. While Discord declined to give The Spinoff user numbers for Aotearoa, the app is widely used among gaming communities and others – the r/New Zealand server has 4500 users alone.

But the advantages of Discord don’t just work for gamers. The platform’s design is ideal for everyone from drug dealers to university clubs. This is an example of the adaptability of social media, says Veale, reeling off a few examples – people who used World of Warcraft as a chat room, or saving on SMS fees by taking pictures and adding text.

Lucy Blakiston, one of the minds behind popular current affairs Instagram Shit You Should Care About (SYSCA), is one of the people who have adopted Discord. Until recently, she ran a Discord server with over 11,000 members of the SYSCA community. “Discord is a big group chat where everyone gets to be in this fun and quite organised space,” she says. She initially used Discord for a book club, but then expanded her server to have channels for discussing everything from mental health to cooking.

In some ways, the SYSCA Discord achieved its purpose: it was a space for interaction in a smaller community than SYSCA’s 3.4 million Instagram followers. Eventually, however, the amount of energy and attention maintaining the Discord required became a distraction from SYSCA’s core purpose of making news accessible, and the team closed the server earlier this month.

The prevalence of Discord speaks to a wider internet trend: the tendency of users to shift from the intensity of public social media platforms and gravitate more to smaller, private groups. On Facebook, for instance, the best and worst of the platform takes place in private groups, not the decontextualised flow of the news feed. Once, there was hours of entertainment to be had in scrolling thousands of posts down to the bottom of your crush’s Instagram feed, or exploring the archives of a new friend’s Tumblr. Now, the juicy stuff is either ephemeral (Instagram Stories) or unsearchable (Discord servers).

Occasionally, the internet is still spoken about in terms of community and possibility, usually when mega-corporations are trying to promote a bizarre new product. The barriers to entry on certain platforms – Patreon and OnlyFans require users to pay, for example, and Discord servers and Telegram channels require a link for access – seem to go against this ethos.

For Veale, however, a career in studying media is a reminder that time – and the internet – is a circle. He remembers people running their own gaming servers and IRC channels. “[The internet] began as niche and focused and atomised and private,” he says, reminiscing about long-gone niche website forums or defunct social platforms like Dreamwidth. It was the newer social platforms like Facebook and Twitter that were unusual in their public interfaces, bringing people from different communities together.

But while closed or niche groups were common in earlier internet eras, and may have shared some functionality with Discord today, there is a crucial difference: forums are searchable. “It’s useful for [organisations] to have a Discord, it takes the load off them, but it’s harder to find and it’s not searchable,” Veale says. The low profile of Discord, especially to non-users, is partially because there is no way to stumble upon a Discord server while searching the internet, the way you can with most Reddit posts or help forums. To join a Discord server you have to be given the link, although some can be found on server indexes.

The privacy of closed Discord groups doesn’t just challenge ideas about the open internet. It also creates problems with moderation: how do you control what people say in private groups? The anonymity of the app exacerbates this, as most people use aliases and there is little personal information about the people you’re interacting with on the other side of the screen. It’s a challenge Discord has come up against, especially as the app has been implicated in far-right extremist violence.

“I had never used Discord and I knew it needed moderation,” Blakiston says of the SYSCA server. “With [discussing] politics and world events, it gets quite heated.” Using a Google Form, Blakiston recruited moderators from around the world, so that there would be people in each timezone. “I have so much respect for [the moderators] because they can manage a community and code and be extremely online and be so happy to be there,” she continues. While the group had no major issues, she had to veto ideas like having a group movie night via a voice chat due to the challenge of moderating voice.

With sensitive topics like grief and mental health being discussed on the SYSCA server, the moderators, who were volunteers, kept the community positive. But good moderation required more time and attention than the SYSCA team could provide, so Blakiston made the call to close the SYSCA server “while it was still good”.

“Discord gives users the tools they need to stay safe,” said a Discord spokesperson when reached for comment. The platform has clamped down on extremist activity and has strictly enforced community guidelines. Server administrators have the ability to block or remove people from servers if harassment becomes a problem. The company also runs a “moderator academy” to train people to become official moderators, as well as having a full-time trust and safety team who “proactively take additional safety measures based on wider platform trends or intelligence they receive, ensuring that Discord remains a safe and positive place”.

“The biggest problem with Discord is [that some] people don’t want to moderate.” says Veale, who has studied online harassment. “If you have a white supremacist community that’s flying under the radar, giving them tools to look after themselves isn’t going to help anyone.” He finds it particularly concerning when a private Discord group is used to coordinate hate on other social platforms.

Blakiston has observed the same thing. “It’s scary … when these underground Telegram or Discord groups get their niche communities that back each other up and start infiltrating [others],” she says.

Discord, with its many features and functions, is an ideal platform in many ways for creating community, when the more public platforms often subsume individual voices and substantive discussions in the wash of constant content. For the most part, it’s used not by big groups but by smaller sets of people who may even know each other IRL to socialise online.

What does it look like to create a digital community where all people are welcome and everyone’s voice matters? This is a key question of the contemporary internet, and relay chats, blogging, and Discord are different responses. Building community was Blakiston’s hope when she set up her server. “It’s good for making people feel heard and seen,” she says.

To make people welcome, though, requires both openness and privacy, ways to prevent the harassment that becomes easier without in-person interaction. Blakiston can imagine using Discord again in the future for niche purposes. For now, though, she’s closing the Discord chapter of SYSCA. She sighs, reflecting, chat bubbles and memes and the startling vulnerability of internet strangers still scrolling in her mind. “It’s been such a ride.”