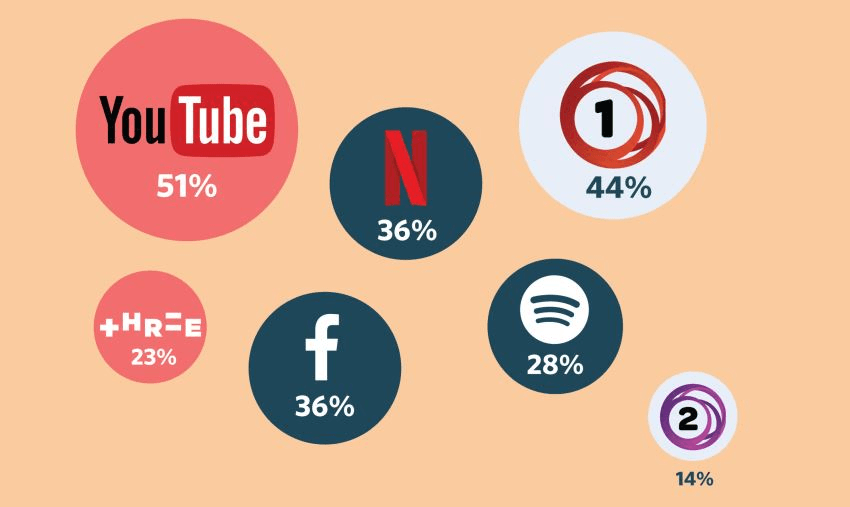 YouTube rises to top of the pile, and nine other findings on NZ media audiences

New Zealand’s only comprehensive pan-media audience survey comes just once every two years – and the latest has just been released by NZ on Air. Duncan Greive picks out the 10 most interesting conclusions.

Measuring what audiences really do is notoriously fraught. Most surveys are done on behalf of the client – ie the platform itself – and only released when they show it in the best possible light. This is most egregious in radio, but pretty well everyone cherry-picks and smooths out the data, because no one has any incentive to say they’re doing poorly. This is why NZ on Air’s biannual “Where are the Audiences?” report is so valuable, and interesting. It’s done by an agency with no dog in the fight, and the only one which makes a decent attempt to count everything from Spotify to magazines to YouTube to TVNZ 1.

Thanks to the frequency with which they’re carried out, there is a huge weight to the surveys – they capture two years of changes in behaviour, an incredibly long time in this lightning-paced arena. Additionally, this one was delayed into May-June, meaning it captures any behaviour change which happened post-lockdown. Here are my picks for the ten most telling data points.

YouTube is now the most popular channel in the country

The user-generated video platform has overtaken TVNZ 1, an event which would have seemed unfathomable a few short years ago, but now has an air of inevitability. Almost one in every two New Zealanders, 48%, say they use it daily, and consumption of online video is now at over an hour a day, with SVOD at 90 minutes. This shows that the space is challenging the dominance of television, and has already won the battle for younger people.

2020 is the year that online media overtakes traditional media

If current trends continue then 2020 will be the crossover point at which digital media overtakes traditional media in delivering the largest daily audiences in New Zealand.

“If these trends continue, and there is little in this study to suggest otherwise, then by 2021: online video will attract the biggest daily audience in New Zealand; SVOD will have overtaken radio, and perhaps linear TV, to deliver the second or third biggest audience; [and] music streaming may also have overtaken radio listening.”

TVNZ was by far the most-used source (47% cited it) for updates through Covid-19, but also the most-trusted (28%). No other news source rated above 5% as “most trusted”, a shocking differential. This was also backed up by its usage – 44% said they used it daily, a slight increase on the 2018 survey. Three is down from 35% daily usage to 23% in just six years, while TVNZ 2 has halved in the same period, falling from 27% to 14%.

Sky is in trouble

The one time giant of our media landscape is now in a battle for its life. “In 2014 57% of New Zealanders had daily access Sky TV compared to 33% who do so in 2020, and some audiences are significantly less likely to have access to Sky: 15- to 34-year-olds (17%), Asian New Zealanders (12%) and Aucklanders (28%).” Its saving grace might be in the swing to SVOD – the relaunch of Neon happened after the survey, and is its best shot of regaining its lost youth.

Well not everyone. But a phenomenal number of us (61%) do, and 36% claim daily usage. Given that the platform was not even launched in 2014, when this survey was first conducted, that’s a phenomenal result.

Four of the top five ‘channels’ are digital

The strategic investment in its OnDemand service is paying off extraordinarily well for TVNZ, with its daily popularity (21%) overtaking TVNZ 2 and breathing down the neck of Three (23%).

Spotify is now as influential as radio

“The growth of Spotify and the decline in listening to most radio stations now results in streaming services being equally influential as radio stations and word of mouth from friends and family in terms of New Zealanders finding new music.”

Age defines media consumption – but so does ethnicity

The report notes that how old you are is the strongest predictor of what you consume and where. “While 2020 may be the crossover point between digital and traditional media attracting the biggest daily audiences overall, among 15- to 39-year-olds this point occurred in 2018 or earlier. We may now be at that point among 40- to 59-year-olds. However there is little sign of digital media closing the large gap to traditional media among 60-plus-year-olds.”

We also see a strong influence of ethnicity. Asian New Zealanders are significantly less likely to watch linear TV at 28% – in part because just 55% even have a linear-connected TV. Māori are super consumers of streamed music, at 55%, and more likely to have Sky. Pasifika are more likely to stream video and music – likely in part due to being relatively younger than other New Zealanders.

The big theme is that our audiences are splintering like never before. While TVNZ remains incredibly powerful, with TVNZ 1 and TVNZ OnDemand the winners as far as local platforms go, the behaviour of audiences is now far more diverse than ever before, a megatrend that has been visible for some time, but is all around us now.

This poses huge challenges to funders, in trying to serve diverse audiences across algorithm-driven platforms, with their behaviour increasingly hard to predict. It is inevitable that those who have built businesses around serving audiences or creating content for audiences across more traditional platforms will find the implications of it incredibly challenging. But it’s to NZ on Air’s credit that it has stayed with this research, and continues to use it as a baseline for thinking about how it should fulfill its mission.