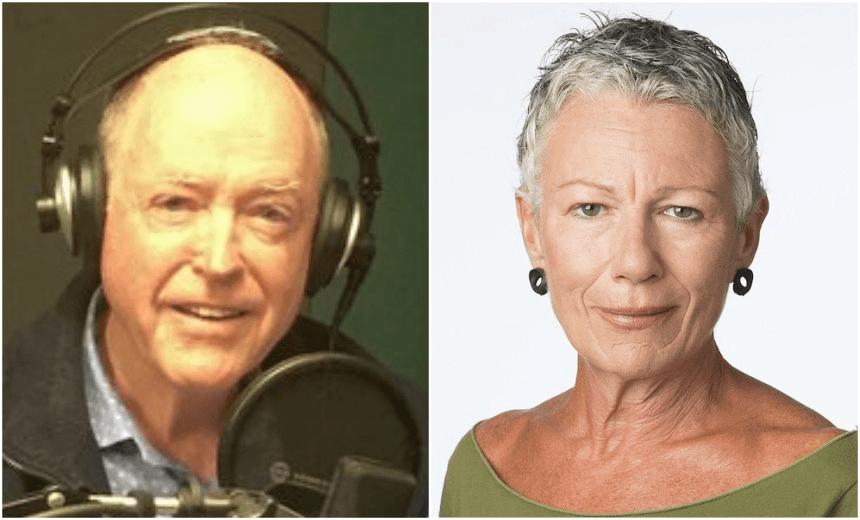 This morning on RNZ Kim Hill generously gave Don Brash 30 minutes in which to explain his problem with Guyon Espiner speaking te reo on the radio. Self-appointed Kim Hill expert and superfan Sam Brooks brings you her best burns.

When it was announced that Don Brash was going to be interviewed by Kim Hill on Saturday Morning, I was both excited and dismayed. Excited because I knew that it wasn’t going to be a softball of an interview, excited because I knew that she’d make fun of him a bit more than any other interviewer would, and excited because I would have a reason to wake up early. Dismayed because Kim Hill surely has better ways to spend half an hour, and because Don Brash is maybe literally the last person I want to hear talk about anything, ever, but especially about te reo Māori.

The interview is here, and you can listen to it if you really want to. It’s pretty painful, and if you can get through it without stepping away from your listening device and saying out loud, “I can’t, I can’t, I just can’t, I’m sorry, but I can’t” then you’re a stronger person than me.

But maybe you don’t want to listen to it, you just want the burns, and I’m here to give you the burns. I’ve included some of Brash’s comments for context. They are, if you can’t tell from the preceding paragraphs, not an endorsement. Similarly, you should be able to tell who is saying what because one of them is burning and the other one is being burned.

0:50 – “… I have to listen to a few sentences of Guyon Espiner in te reo.” “Does that worry you?” Gentle negging to start off with.

1:06 – “Most people who listen to Morning Report will find some segment or other in which they don’t understand a word of what is being spoken about, whether it’s in English or te reo.” It takes guts to neg your employer like that, well done Kim.

Does he think te reo should be an official language? Yes.

Does he accept that RNZ has a statutory duty as a public broadcaster to protect and promote a multitude of cultures but primarily the Māori culture? No, with a long explanation that includes my favourite “I pay taxes” explanation which, funnily enough, always seems to come from people who have accountants who make sure they pay as little tax as legally possible.

Does he accept that RNZ has a statutory duty set out in its charter to reflect New Zealand’s cultural identity including Māori language and culture? No, he hasn’t read it, which is hard to hold against him, honestly.

3:10 – Kim Hill reads out this website link, proving that even though she is a formidable human superior to us all, not even she can hyperlink through the airwaves.

“But I thought you were against separatism.”

4:44 – “Answer that implied question, sorry if I didn’t ask it explicitly enough. You shouldn’t have to listen to te reo, Māori can go to to Māori radio stations or Māori television stations, why isn’t that separatism?”

“The separatism I object to is not the cultural separatism-”

“OH A DIFFERENT KIND OF SEPARATISM THEN.”

I’m not sure if this makes me want to attend The Hill Family Christmas Lunch, never attend, or just hope it is broadcast or at least podcasted.

5:02 – “We know your political position, which says that the government has no responsibility to address the overrepresentation of Māori in negative social stats.”

“I’m quoting you. I think it was about seven years ago.”

“I have no recollection of that.”

5:36 – “The government have the responsibility with dealing with the social statistics of that, and Māori are heavily represented in that, in part because too many Māori don’t speak English properly.”

Kim Hill’s laugh at this ludicrous, racist, fantastical statement is honestly her at her most Sea Witch, like right after Ariel has signed over her voice, because COME ON.

8:20 – “Why is it that every time I quote you to yourself you act surprised and then repeat it?” No context required.

That right there is Don Brash holding his hand over the fire and not realising what he’s doing until he’s got no fingers left.

11:20 – “But-” and Kim Hill has the most divine giggle here, “-most language is, most language was always made up at one point and language evolves. The point you’re making is…. question mark.” She actually says “question mark”, and I really wish that Kim Hill verbalised all her punctuation.

16:10 – “He’s just saying ‘hello, good morning, whatever.’ Is that such a hardship for you to listen to?” “Well I try not to, let’s put it that way because it irritates the hell out of me, I’m sorry.”

“That just seems so separate, I’m sorry but I have to keep returning to this idea that you are against separatism but you keep on insisting on it.”

“Why should he have to? For the same reason, I guess, that Māori had to listen to English and learn it.”

You left your stove on and it is burning up your house, Don.

22:20 – “You cannot go into a kindergarten or playcentre anywhere in the country now without learning te reo, even if there’s not a brown face within fifty miles.”

“So only brown faces should learn te reo?”

“Well, for brown faces it’s presumably useful because it’s their culture, for me it is not of value.”

“I come back to separatism, I’m afraid Dr. Brash. You strike me as the archetypal separatist. Which seems so ironic don’t you think?”

25:30 – “Do you think your opinion on this is [long, exasperated sigh] old-fashioned?” Brash, also perhaps unsurprisingly, does not think this.

Call back to a previous burn, slam dunk, try, hit it out of the park, well done, collect home base, Kim.

“Of course. Why are they not?”

Don Brash disagrees with this, and brings up the Moriori, because at this point in every argument of this kind, where the racism is about as thinly veiled as a bride at her fifth wedding, someone brings up the Moriori, and every right-minded person listening to this screams at whatever listening device they’ve had to hear it from because that is a bullshit addition to every argument of this kind, and is intended not to continue the argument but to send it off the rails entirely.

This renders Kim Hill briefly speechless, she cuts the interview off with the most curt and savage:

“If only Sir Michael King were here today, thank you for your time, Dr Don Brash.”

Honestly, thank you for your time, Kim Hill. Because if you don’t want to put up with this bullshit for more than half an hour, none of the rest of us should either.