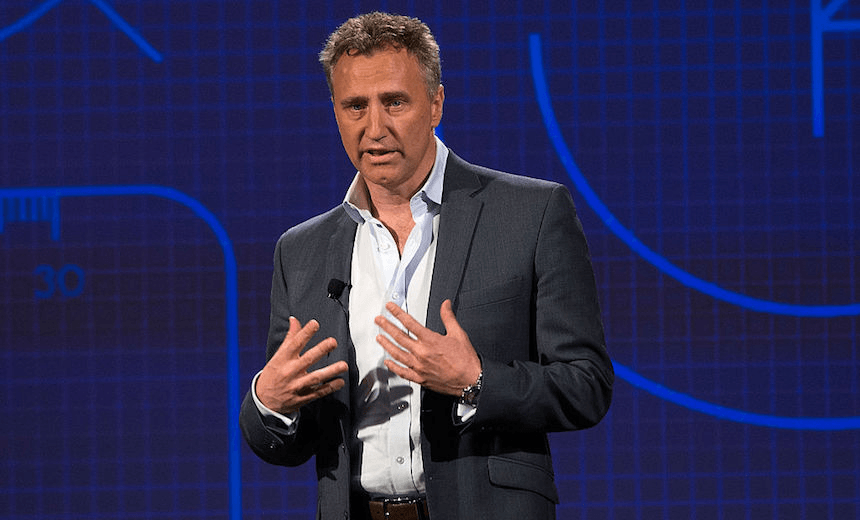 Duncan Greive looks back at the brief and blighted Mark Weldon era.

Last night I watched Mark Weldon complete what would turn out to be his final act as CEO of MediaWorks from the back of a refurbished warehouse in Mt Eden. He stood on stage alongside NBC’s Chris Taylor to announce the replacement of FOUR with Bravo, and the arrival of the Real Housewives franchise to Auckland.

Weldon looked deflated, and spoke in a monotone about how the youth have abandoned television for YouTube. It was a downer. The room was quiet as a tomb, and Jay Jay Harvey struggled to rouse energy for the main presentation to follow.

Afterwards he tried to exit through the main entrance, but a rolling door was descending too fast for him to make it out. The last I saw he was striding purposefully up Water St into the sunset, on his way to resign his position as head of MediaWorks and thus end the most turbulent reign of any media boss in recent memory.

It all started with such bombast and promise. I remember watching in something like awe: Weldon on stage on the waterfront, announcing the arrival of a new media company born from the ashes of the old MediaWorks, without the crippling debt and with a mandate to turn to face the future. There was comedy, reality and Paul Henry… But there was little said about news.

In my enthusiastic appraisal of the event – still the most brilliantly choreographed of its type I’ve ever attended – I managed to miss the fact John Campbell, the network’s star, was nowhere to be seen. And that, Henry aside, other news products were notably low in the mix. Who could care about that when The Bachelor was coming?!

I wrote it up excitedly, and Weldon emailed a link around to all staff the following day. For our little startup website, the post was a big hit. All summer we and most other media watchers remained Weldon optimists. He seemed a strong, decisive leader – even when he shitcanned Natalia Kills and Willy Moon, the two best reality TV villains we’ve ever had, it was quick and unwavering.

The same could not be said for his next big decision, though. John Drinnan broke the news that Campbell Live was ‘up for review’. In reality, it was already as good as dead. Despite it rating its butt off for six weeks as its fans desperately tried to save it, the show was shut down in late May.

That era was a sign of things to come, evidence of the two blindspots he had as a leader. Firstly, he badly misread low ratings as public indifference. The sight of massed protestors outside Flower Street was a remarkable one. Had he handled things differently – at least waiting until the end of the year, and giving Campbell more of a chance to evolve his show – the same result might have been achieved without such catastrophic damage to the company’s brand.

Speaking on Nine to Noon yesterday, ex-Herald editor Gavin Ellis described Weldon’s performance as analogous to Monty Python’s ‘The Black Knight’ sketch, which is how it would prove.

Weldon wasn’t chastened by the public response to Campbell’s axing. If anything, he was emboldened. He followed the announcement that he had got rid of one of the country’s most popular journalists with the announcement he had hired one of its most loathed in Rachel Glucina. She was to lead a gossip website, despite, as Russell Brown pointed out, having had trouble getting gossip out of people for a number of years now. It did not go well.

The ill-will those two decisions created meant that every new show MediaWorks launched was trudging up a steep incline, trying to convince a bitter public to give them a chance. Thus Newsworthy and then Story, each of which showed tremendous promise, had to gut it out against waves of fury which rightly belonged to the executive.

A few months later, he announced the end of the channel’s quarter-century old investigative reporting team, mere months after arguably its finest hour: the quashing of Teina Pora’s sentence for rape and murder.

More chaos! More uproar! More Weldon and board Chair Rod McGeoch obstinately defending the strategy. Which, when you break it down, involved the pair of them telling the furious masses that they didn’t know what they wanted.

They might have been right – I’m sure they didn’t take the decisions lightly, nor without having conducted research – but the brutal and careless handling of it all made what had been probably the strongest news brand in the country the target of intense public outrage: a situation which made it harder for those who remained to do every part of their jobs.

The resignations of first Jennings and then Barry this year were ample evidence that you cannot remove one cog and expect the others to keep on whirring away as they did before. Newsrooms, like all work environments, are an ecosystem – one that breaks down if subjected to change on a swift and seemingly callous basis.

This then, was Weldon’s chief failing: that he didn’t understand either the value of news to TV3, or the importance of relationships within the whole organisation. The channel was always the plucky upstart, its culture the stuff of legend. But as waves of those who had made it so departed, at every level of the business, so that culture eroded even as flash new studios were built and new brands pioneered. And if the public hates your channel for what you’ve done to its longstanding faces, they’re going to struggle to get excited about your reality shows and your radio stations.

Which meant that even the good moves he made – and there have been many, including, I think, the launch of Bravo last night – got lost in the mire of leaks, resignations and restructurings. And the end result was that the final resignation, the one which brought to a close this blighted era, was his own.