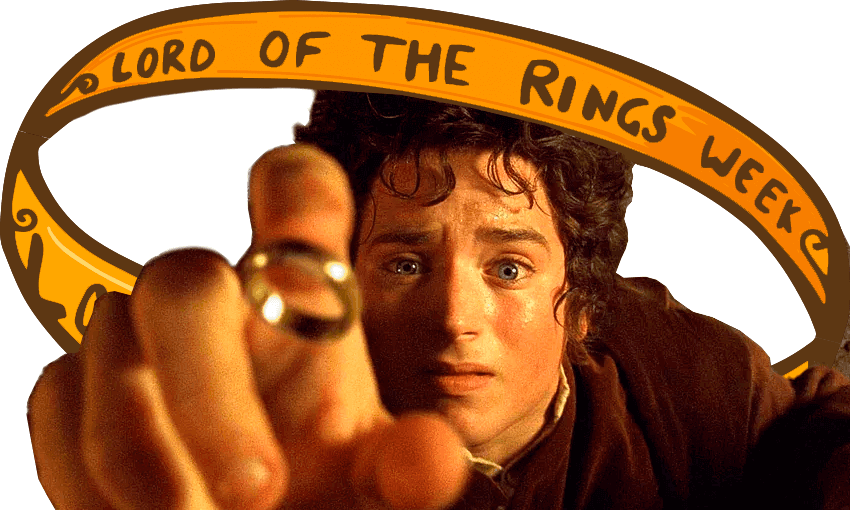 Why we’re talking about sneaky little hobbitses all week

By admitting that, I know my time of relevancy has passed. I understand that I’m further from the zeitgeist than ever before. Yet, before I explain what we’re all doing here, I feel like it’s important to be as up front as possible, to tell you where I’m coming from when it comes to Peter Jackson’s defining statement.

As a movie, I just dig it. Put The Fellowship of the Ring on and I will watch it until the end. I will not leave my seat. I do not need snacks. Do not interrupt me, because I will sit there and consume every single scene, from the moment Gandalf arrives in Hobbiton with an explosion of fireworks, to the end when Frodo Baggins rescues a drowning Samwise Gamgee, and everything in between.

I would not consider this a waste of time. I will consider that a precious – my preeecious – gift.

Here at The Spinoff, that’s a controversial opinion. An unscientific poll conducted with staff found a near-split on those that liked that film to those that loathed it. The tipping point might be this: when the website’s founder, Duncan Greive, heard Jackson was working on a Beatles documentary, he described him as having “fucked Tolkien’s epics to death” in a passionate plea begging him to stop.

In some regards, I agree. I don’t think Jackson’s 2001 trilogy kickstarter is a perfect film. Far from it: it’s overly whimsical, it’s smugly twee, it’s cheek-smackingly saccharine, it takes far too long to get going – especially on the overdone extended versions – and the shocking lack of cast diversity means it sure has aged badly.

I’m also not a fan of the sequels, and The Hobbit prequel, is an entire trilogy too far. The Lord of the Rings: the Fellowship of the Rings is a shit film title too. As for Jackson, he has three options: retire, finally make that Tintin sequel, or go back to splatter films. He’ll choose none of those, probably spending the next 20 years asking George Lucas how to ruin his existing films with CGI flourishes.

But here I am, wearing my heart on my sleeve. I love Lord of the Rings, I really do. Having analysed this passion for at least, oh, five minutes, I’ve discovered it stems from one simple thing: I love an epic quest. Give me a film in which the main characters have to achieve something huge, embark on major mission, or conquer a seemingly impossible challenge, and I’m all in. Fix the flux capacitator and wait for lightning to strike? Annihilate the Stay Puft marshmallow man? Survive a trip to Mordor? Inject it into my eyeballs until they pop.

And I’m going to watch the film with my son to find out if he thinks it’s as awesome as I do (spoiler alert: he doesn’t). We may even have a sneak non-exclusive peek at Amazon’s uber-expensive Lord of the Rings TV series. It’s a long week. Anything can happen (Jeffrey Bezos, call me).

Maybe, just maybe, even Rings haters will find something to love. As Frodo and Sam taught us, it’s not about the destination, it’s about the journey – and the friends you make along the way.