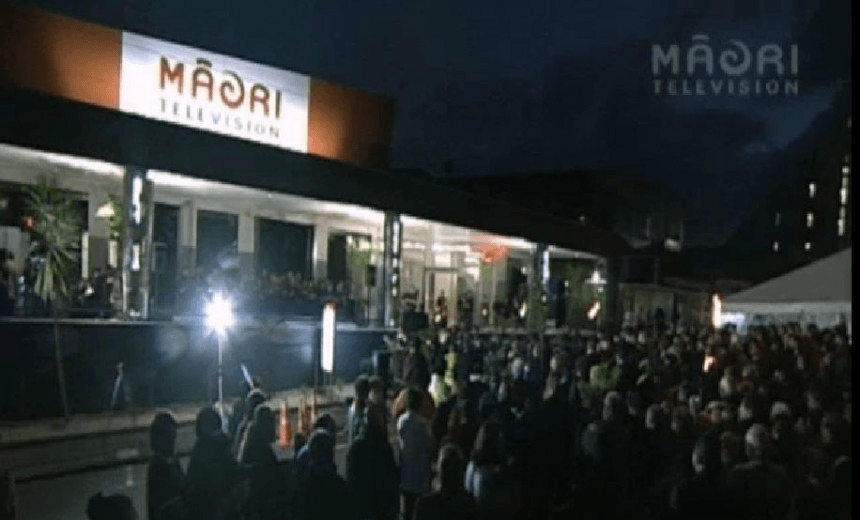 The launch of Māori Television in 2004.

I’m a huge fan of Māori TV. Which is why I’m hugely worried about what’s going on there

By Marama Davidson
Guest writer
Made possible by

The launch of Māori Television in 2004.

Opinion: Changes at Māori TV give great cause for concern. The chief executive should be encouraging coverage critical of the establishment, not shutting it down, writes Green Party MP Marama Davidson

I don’t know about you, but I’m sick of hearing bad news about Māori TV. Whenever Māori TV is mentioned in the media, it’s usually followed by a lot of WTFs, a bunch of SMHing and an annoying amount of LOLing. And that’s a problem for me, because I am a fan of Māori TV. Like, a really big fan.

Whenever I have a bit of down time, I love flicking on Māori TV. I can watch pretty much anything on there, but my kids and I especially love bundling up and watching Kairākau together. If you haven’t seen it, this is the most kickass history of Aotearoa that’s ever been made. Forget those Kardashians – you should be keeping up with Kairākau! And that’s not the only good thing on there. My husband tapes all of the kickboxing shows, while all of my kids get into the Dora reo programmes. Plus, as an added bonus, all of our reo is getting better by watching it.

The channel has worked hard to be a vehicle for the promotion of te ao Māori – whether that is our reo, our tikanga, our creativity or our politics. So given all the things that are great about the channel, why are staff now leaving Māori TV in droves? And is Chief Executive Paora Maxwell taking a leaf out of former MediaWorks CEO Mark Weldon’s playbook?

When Paora Maxwell came to the Māori Affairs Select Committee in Parliament this week, I put it to him that out of 162 FTE staff, more than 45 people that I know of have resigned or been “moved on” since his appointment in 2014. Mr Maxwell flat out denied that amount of people leaving and puts it at 20 in the past two years.

The exodus of staff from Māori TV is a huge concern, particularly when some of those people were foundation staff of over 10 years, and have included high profile, highly respected and fluent reo speakers. These are top class journalists, who established Māori TV as a media organisation that asks the tough questions on issues such as Kōhanga Reo funding (questions which many grassroots Māori wanted answers for), and human rights breaches in West Papua.

I am never one to deny a Māori a good pay packet, but something smells fishy when staff at the top are getting more, while other parts of the organisation are haemorrhaging people – and good people at that. According to Māori TV’s Annual Report 2015, costs for the Executive Group have increased significantly, while the number of staff earning more than $100,000 has shot up from 19 to 25 in the last year.

At the Select Committee, I also raised concerns about Mr Maxwell’s editorial micromanagement. He claims full and final editorial rights, but I would argue that management should exercise restraint in using those powers. The absolute gutting of Native Affairs, and the stripping back of investigative journalism, in my view, is not exercising restraint, and weakens te ao Māori. Paora Maxwell should be encouraging, not shutting down, current affairs content that’s critical of Māori establishment figures and institutions.

I am hearing of staff dissatisfaction but understandably people are reluctant to speak out – so that job falls to those of us who can. I note there was a staff survey done in 2013 during the previous CEO’s time. I would be interested in a follow-up staff satisfaction survey under Paora Maxwell’s leadership. The survey would need to be accessible for all, and allow for frank responses without repercussions.

Māori TV belongs to the people. It’s a taonga and should be protected. We fought so hard for its creation and we need to hold on to it. We need to accept the challenges that are arising, and work through them with a view to the future. Challenging authority is a good thing, and Māoridom has a long history of it. The Chief Executive of Māori TV doesn’t have to do it, but he does need to allow his staff to.