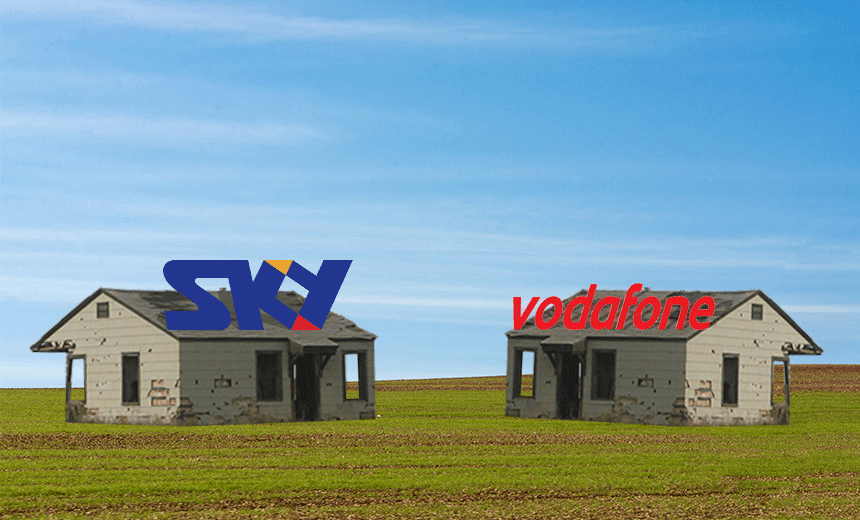 The Sky and Vodafone deal: a modern business fable

The only universally understood business in Auckland today is housing. So what better metaphor for Tim Murphy to use to describe the motivations and implications of today’s Sky-Vodafone deal.

Vodafone New Zealand and Sky TV are happy next door neighbours. Two houses.  One with a view, the other with a sprawling yard. Both valuable. Both relied on by the passing public for access to the beach.

Sky wants the view too, so makes a generous offer to buy out Vodafone NZ. And it does. But Vodafone’s parents overseas want their child to stay living in this market so decide to stump up the money to invest in both properties, unite the title, and let the parties stay living in harmony next to each other. Sky is left with just under half the overall value. The fence is torn down, Sky gets to see the view and go swimming and Vodafone NZ gets the run of the vast property.

The parents get the benefit of any capital gain in the years to come. The other neighbours are promised there’ll be no big fences and everyone will be welcome to access the beach. There’ll be savings for the two households.  Two gardeners, two arborists, two pool cleaners will become one. Sky will be able to use Vodafone’s drainage network. Vodafone will get to share the Sky family’s home entertainment centre. And the whole suburb will benefit from the splendid combined property.

Vodafone has already bought up neighbours like Telstra, who had in turn bought their neighbours, Clear Communications, and iHug and World Xchange. Eventually those houses disappeared. On Sky’s other boundary, homes built by Netflix, Lightbox, TVNZ on Demand and other wannabes invading the neighbourhood need to be somehow kept out of public view.

This sale and purchase is probably a bit of a defensive move in general.

And that in a modern Auckland housing fable, is kind of what’s happened with Vodafone NZ and Sky buying each other.

Yesterday’s press conference in the splendour of the 32nd floor offices in the Vero Building of Craig’s Investment Partners, was an unusual affair. The parents, Vodafone Plc weren’t in attendance, leaving their son, local CEO Russell Stanners flanked by three members of the Sky family.

Stanners who will take charge of the combined entity was strangely separated at the table from his old mate and the Sky patriarch John Fellet by Sky’s chairman, Peter Macourt. There was no overt buddying up. It was a very grown-up, very male affair. Stanners, a habitually tieless executive, even draped himself in a Windsor knot to oversee proceedings.

It is a big play. Sky paying $3.4 billion for he NZ Vodafone in cash and shares. And competitor Spark,with its Lightbox subsidiary, seeing its shares hit in value two days in a row. In short, Stanners and Fellet explained, they could get benefits of around $850m from revenue gains or cost savings by coming together.

The communications company would get great entertainment and sports video content for its customers and the pay TV company would get access to cheaper set-top boxes and mobile and broadband channels to sell its content. Stanners will be overall chief. But Fellet, a chief executive with singular dominance over a big listed company in the New Zealand market, will also be a CEO of content and entertainment. Fellet has always spoken of ‘me’ and ‘my’ when referring to Sky and continued that yesterday, adding ‘his network’ when talking about Vodafone and Stanners.

The new business will be able to move from a triple play – its current commercial association offering voice, Internet and video, to a ‘quad play’ which Fellet explained would add mobile phones. It fell to the noted business commentator Rod Oram to ask the obvious question: why did Sky have to buy Vodafone NZ first, then be half-bought out by Vodafone Plc? Why didn’t Vodafone senior just buy Sky?

The answers weren’t entirely clear. It did allow Vodafone to hold 51% of the combo and that meant the company could be included on its international books.

Someone asked about job losses but it seems, as usual, there’ll be too few to mention. The two operations are so complementary and distinct there is little overlap.

What’s in it for the consumer that they can’t get now if customers of both Vodafone and Sky?  “More innovation, new devices, new networks” said Stanners. Would consumers have to be Vodafone customers in future to watch the rugby? No. Would Sky still offer its content to others, like 2 Degrees? Yes. Would Vodafone still deal with Netflix? Yes. Could Spark seek Sky content? “Yes,” said Fellet. “I’ve been trying to sell to Spark for five years.”

Is Vodafone a majority shareholder in a listed company in other markets? “Yes,” Stanners said, offering our fellow developing nations of South Africa, Kenya and, in the past, Fiji. No one asked if Sky, which has been in a PR funk of late, will lower its prices to warm the hearts of those paying $100 a month but who see great stuff on other, on-demand services.

Sky TV will continue its use of satellites under a deal running until 2021 – so dishes will remain. Fellet did say Sky will look to add Internet-only packages, implying they might be cheaper. Stanners flagged premier content being more available to his mobile customers in ‘the medium term’.

The combo company would help accelerate uptake of fibre, and that would have a wider national benefit. Between them they serve 3.7 million New Zealand customers. But those hopes were as consumerish as it got.

There will continue to be two brands under one corporate umbrella. No ‘Skodafone’. One big property under one ownership. With, on yesterday’s evidence, not even much of a taste for renovation of the two homes.