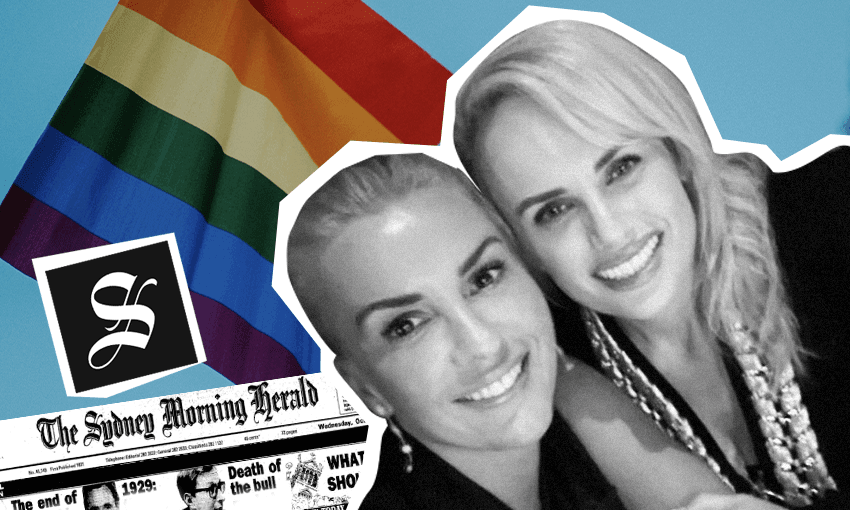 First the Sydney Morning Herald threatened to out Rebel Wilson. Then they complained about being ‘gazumped’ when she refused to play by their rules. The sheer audacity, writes Mad Chapman.

I’m trying to imagine what I would have done if a journalist threatened to out me. If a journalist emailed me to say they’d heard I was in a relationship with a woman and I had two days to confirm or deny before publication. I probably would have done exactly what Rebel Wilson did on Friday: share my relationship on social media so that it wasn’t news any more. Except unlike Wilson – who captioned the Instagram photo of herself and her partner with “I thought I was searching for a Disney Prince… but maybe what I really needed all this time was a Disney Princess” – I would have named the journalist and outlet and made sure everyone knew what they’d tried to do.

Wilson didn’t do this. Instead, Sydney Morning Herald columnist Andrew Hornery narked on himself with a column complaining that Wilson had “opted to gazump” the outlet’s planned story on Wilson’s new relationship, which was being celebrated by fans online.

“It was with an abundance of caution and respect that this media outlet emailed Rebel Wilson’s representatives on Thursday morning, giving her two days to comment on her new relationship with LA leisure wear designer Ramona Agruma, before publishing a single word,” he wrote.

There’s something unbelievable about not only planning to out someone in 2022 (the editor has since denied that this is what the outlet wanted to do), but then complaining when that plan doesn’t work out. It’s literally unbelievable. I read Hornery’s words (it only took him 341 words to ruin everyone’s day) and genuinely did not believe that they were real. Does this sort of thing really still happen?

I got my first real job in media (or anywhere) in 2016. I realised I was gay in 2021. Why it took so long is for me and a paid professional to figure out. But I certainly never factored a public outing into my thinking. In my time as a writer I have seen few, if any, instances like this in New Zealand. But they have happened. Alison Mau was simultaneously outed by the Herald on Sunday and Woman’s Day in 2010 (In 2017, Rebel Wilson won a defamation case against Woman’s Day). In 2014, Stuff ran a story about a sex video involving a New Zealand actor and a rugby player. Scroll down to the bottom of that article and it reveals the story was originally published in the Sydney Morning Herald.

I’m not famous like Wilson, but the process of coming out is still the same. Once I knew (a very unceremonious realisation one Saturday morning while hungover on the couch), I immediately wondered who I should tell and how. I was advised by a friend that I actually didn’t have to tell anyone, but I wanted to make sure people knew when I wanted them to, and not because someone saw something and told someone who posted a comment somewhere public. I had those thoughts as a 27-year-old random in Auckland. I’m sure Wilson had many more thoughts as a world-famous actor.

“Considering how bitterly Wilson had complained about poor journalism standards when she successfully sued Woman’s Day for defamation, her choice to ignore our discreet, genuine and honest queries was, in our view, underwhelming.”

The entitlement in this line from Hornery is astounding, not least because it reads as though he really believes it. The editor of the Sydney Morning Herald responded to the backlash by saying he hadn’t decided whether to publish a piece about Wilson’s relationship by the time she posted about it herself. They were just asking questions.

Hornery then went on (yes there’s more even though it was, as I said, only 341 words) to suggest that because Wilson had had a boyfriend in the past, “It is unlikely she would have experienced the sort of discrimination let alone homophobia – subconscious or overt – that sadly still affects so many gay, lesbian and non-hetero people.” Oh buddy. What a beautiful car crash of a sentence. To express something so ignorant while being semantically inclusive with “non-hetero people”. Like carefully polishing a massive piece of shit.

Ultimately, the Sydney Morning Herald could have published absolutely nothing and that would have been the correct course of action. Instead, they pulled the classic move of forcing, and then inserting themselves into, someone else’s coming out story. Some of us are late to our own queer parties, and some may choose never to talk about it. That’s the beauty of choice.

One thing’s for sure: anyone choosing to be open about themself and who they love will never “gazump” a media story about their own life. Hornery was pissed about that, and likely about the reader traffic lost as a result. Sadly, his self-own and the editor’s hamfisted response has resulted in maybe even more traffic for the website than if they’d gone ahead and outed her. Sex and sexuality sells. But so does ignorance.