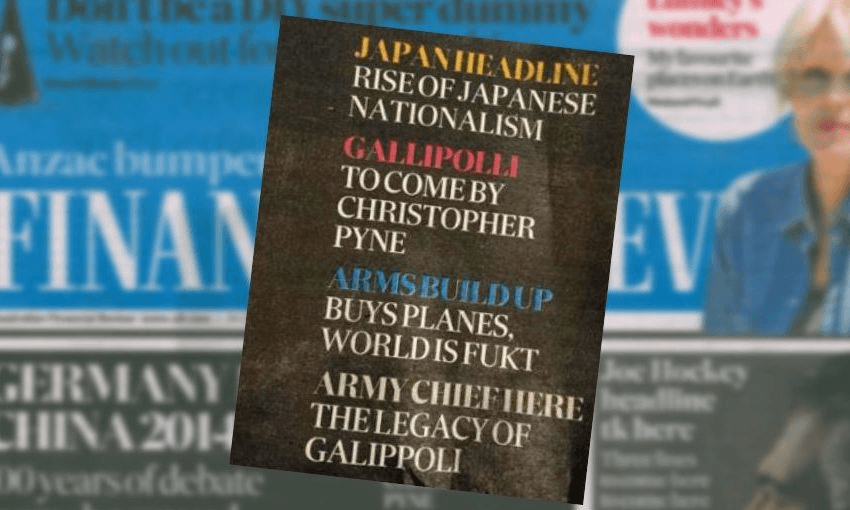 Where is the lie?

Where is the lie?

Every now and then, an epic headline blunder (or spelling booboo or layout flub or grammar snafu), the work of some doomed subeditor, is so bad it becomes famous. “Girls’ Schools Still Offering Something Special – Head”, it will say, or “Breathing Oxygen Linked to Staying Alive” or “Julia Roberts Finds Life and Her Holes Get Better With Age”.

Then there are ones where the subeditor has written dummy copy, intending to go back and put the real words in later, but then hasn’t gotten around to it, and the newspaper has gone to print with “100PT SPLASH HEADING HERE” on its front page in enormous bold type.

To all of those disasters I say, pah! That’s nothing. Because I once worked as a subeditor for a newspaper which came off the presses with the words WORLD IS FUKT on its front page and was delivered to 16,000 readers.

The Australian Financial Review, aka the “Fin”, is a six-day-a week business newspaper with a circulation of around 50,000. Just going off the pictures, it would seem to be targeted at old white rich men shaped like potatoes. In 2013 it became one of the Australia-based Fairfax newspapers to outsource its subediting to a Fairfax subsidiary in Auckland. It was mutually beneficial: they wanted to cut costs and we were willing to work for shit wages. We were a “sub hub”, sort of a journalism equivalent of a Spark call centre in Manila.

For those who don’t know, subeditors fact-check stories, eliminate grammatical errors, write headlines and captions, and love nothing more than to begin sentences with, “For those who don’t know”. These days, most subs have been fired to save money, which is why, when you read a newspaper today, nothing’s spelt rite.

Subediting is one of those things only a few people can do. A lot of people think they’re good at it, but they’re actually just pedantic pun addicts who adore annoying alliteration. The main attributes of a good sub are elegance and economy with language, and an ability to do shit really quickly without fucking it up.

In that sense, it’s an impossible task, because you’re not supposed to make any mistakes. This particular task was made even impossibler by the fact that the Australians had a unique writing style I would describe as impenetrable. They had a weird way with prepositions (criticisms around a company’s governance, doubts over the policies, a man who suffered with a depressive illness), used strange words like “spruiking” and were fond of naval metaphors (“A wave of good macro-economic data out of China has buoyed resource stocks this week.”) For our part, we were sent a directive urging us not to write the word “bro” in headlines.

Moving the subediting to Auckland while leaving the rest of the company in Australia turned out to be a monumental clusterfukt. Our Ocker cobbers resented us replacing their colleagues, some who’d worked there for decades. Without the social constraint of face-to-face contact, relations sometimes turned caustic. I had always found the Australia-New Zealand rivalry thing silly and untrue but, now, I was really seeing the point of it.

On that fateful cover, on the front of an Anzac weekend bumper special edition five years and a few days ago, “WORLD IS FUKT” was just one of a plethora of fuck-ups, including: “Japan headline”; two different misspellings of Gallipoli; “three lines to come here”; and eerie empty space. Elsewhere, under the tragically ironic header, “Passion for punctuation”, was the enigmatic sentiment, “Julian Barnes, xxxx, xxxxx and xxxxxxx on magic marks”.

“WORLD IS FUKT” itself formed part of an ominous triple subheading, “ARMS BULDUP / BUYS PLANES / WORLD IS FUKT”, which referred, or so we guessed, to a news story about Tony Abbott’s recent purchase of fighter jets and a companion feature article on the prospect of global conflict. The issue went out to newsstands across Western Australia but was yanked before it got any further.

Back in Auckland, we knew that none of this was our fault, but waited in petrified silence to be fired anyway. But instead of addressing it, our bosses just pretended nothing had happened. In Australia, the Fin’s editor tautologically described the incident to the press as an “extreme one-off” and apologised for the “unacceptable state” of the paper, which had come about, he said, after a production staff member in Sydney “pressed a wrong button”.

While the Strayans didn’t blame us for the cover, they didn’t not blame us either. An article in the Guardian with the headline “Apocalyptic error puts the F in AFR” pointedly ended with, “A year ago, the AFR outsourced its subediting to a Fairfax subsidiary in New Zealand”. The implication was that we were the perps, and our Australian colleagues didn’t exactly beg to argue.

After three years, the Fin ended its contract with Fairfax in New Zealand. But, instead of bringing its subediting back in-house, it opted for a different contract with the Australian Associated Press subsidiary Pagemasters, also based in Auckland. Somewhat predictably, three years later – last Friday, in fact – that deal was also cancelled, and the paper announced it would go back to hiring the kind of people who said “spruiking” in real life.

In the weeks following the WORLD IS FUKT fiasco, the issue quickly became a collector’s item, fetching up to a hundred bucks on eBay. People who’d never dreamed of forking out $3.50 for a right-wing financial newspaper hooned down to the corner store to snag themselves a copy. The hashtag #worldisfukt started trending on Twitter.

Journalists are a maligned folk, and often for good reason. But here was a rare moment when readers really felt connected to the product. What they appreciated most was the honesty. “Finally,” tweeted Catherine Strong, “journalism that tells it like it is.” “I think ‘World is Fukt’ should be entered into the #Walkleys for best headline,” said Bronwen Clune. “In all fairness,” commented Fiona Katauskas, “‘World is Fukt’ is a pretty accurate headline for almost any story.”