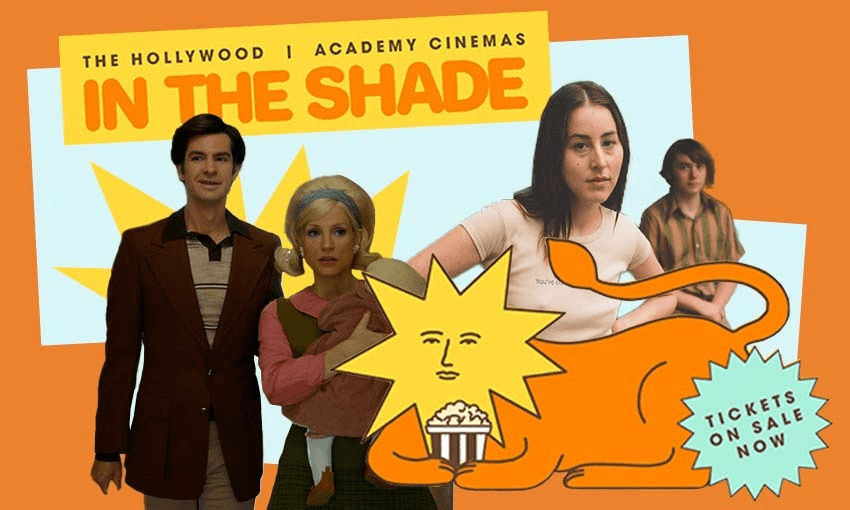 Some of the highlights from In The Shade (Image: The Spinoff)

Some of the highlights from In The Shade (Image: The Spinoff)

Boasting a lineup of some of the most acclaimed films from the past 12 months, the new In The Shade festival kicks off in Auckland this week. Stewart Sowman-Lund finds out more.

January at the cinema is often a dumping ground for disappointing Hollywood blockbusters or the latest crappy horror remake (although the new Scream is actually rather good). It’s also, conversely, often the time that New Zealand audiences are finally able to see the most viable Oscar contenders for the first time, months after they debuted at overseas film festivals. There is never any guarantee they’ll all make it to our screens and, if they do, they often don’t make it much further than the local arthouse cinema.

This year, things are going to be easier for Auckland-based film buffs hoping to complete their Oscars scorecard in time for awards season. A new two-week film festival, called In The Shade, kicks off later this week, boasting a formidable lineup of some 2021’s most acclaimed films. Spread between Avondale’s iconic Hollywood Cinema and the home of arthouse, the Academy Cinema in Auckland’s CBD, the festival launches in the shadow of last year’s Covid-19 lockdown that saw the annual International Film Festival cancel its Auckland season and lose its director after just two years.

So what makes In The Shade’s lineup so good? Well, if it’s not Jane Campion’s The Power of the Dog, the current frontrunner screening now on Netflix, the next best picture Oscar winner is likely to be at In The Shade. There’s Licorice Pizza, the acclaimed new coming-of-age flick from Paul Thomas Anderson, and Nightmare Alley, a gothic thriller from Guillermo del Toro (whose last film, The Shape of Water, won best picture). Also screening is the lauded Japanese film Drive My Car, a likely shoo-in for best international film, having won a string of critics’ awards in recent weeks. The Eyes of Tammy Faye, the true story of the famed television evangelist, was set to preview at last year’s film festival before the Auckland season got canned. All up, there are around 50 films on the bill.

Festival spokesperson Courtney Mayhew says the event was put together in record speed and was the outcome of “blind optimism” during last year’s lockdown. “A few people got together who work in different areas of the film industry and were having a chat during the Auckland lockdown,” she says. “We saw the writing on the wall of what was inevitably going to happen, and what turned into 100 days of lockdown. We knew that so many big blockbusters were being pushed back and were going to take up a lot of screen space and there would be some awesome films that wouldn’t quite make it through to Auckland audiences.”

All up it was less than a month between deciding to stage the festival and announcing it to the public.

While the International Film Festival had Bill Gosden as a recognisable face behind the scenes for 40 years, In The Shade has a degree of mystery surrounding its backers. The organisers are simply described as a collective of film lovers called Dos Ojos. “Dos Ojos are a secret collective of film lovers who wanted to bring a summer festival of cool cinema to Tāmaki Makaurau,” says the festival’s website. No names are publicly listed and when you click on the Dos Ojos logo, you’re rickrolled – taken to a YouTube video for Rick Astley’s ‘Never Gonna Give You Up’. Mayhew doesn’t say much more, only sharing that the group is passionate about film and wanted to put on an event that was accessible to all of Auckland.

“This past year has been so different, it’s a bit like we’ve now been let out of the cage and people are remembering what it’s like to hang out with people,” she says. “We loved the idea of bringing Aucklanders together.”

The group hopes, too, that In The Shade could become an annual fixture on the Auckland events calendar. “We’re dipping our toes in. Dos Ojos would love it to be an ongoing thing but there are no expectations there,” says Mayhew. “Let’s just see what happens.”

Five must-sees at In The Shade

Possibly the most critically acclaimed movie on the bill, Paul Thomas Anderson’s latest film gets its NZ premiere at In The Shade. Starring newcomers Alana Haim (yes, of the Haim sisters) and Cooper Hoffman (the son of the late, great Philip Seymour Hoffman) alongside the likes of Bradley Cooper and Sean Penn, this coming-of-age dramedy set in the San Fernando Valley has been a consistent awards season frontrunner and a staple on critics’ top 10 lists.

“It is animated, which some people might think they’re not into, but it’s an insanely intimate portrait,” says Mayhew. Flee isn’t just animated, it’s also a documentary. In beautiful detail, it follows Amin Nawabi as he relates his story of leaving his home country of Afghanistan to immigrate to Denmark as a refugee.

A romantic drama starring Mia Wasikowska and Tim Roth. “This is one you can take your mum to,” says Mayhew.

A dark horse in the Oscar race but an absolute favourite with the critics, this Japanese drama is based on the short story of the same name by Haruki Murakami. Don’t let the three-hour runtime put you off: by all accounts it’s absolutely worth committing to. It’s so far picked up a slew of awards dating back to its debut at the Cannes Film Festival last July.

Perhaps the most “Hollywood” offering at In The Shade, Guillermo del Toro’s latest stars Bradley Cooper, Cate Blanchett and Toni Collette. The second adaptation of the 1946 novel of the same name, this more flashy, modern interpretation is poised to become a noir classic.

In The Shade launches on Wednesday, January 19 and runs until the end of the month. For more, visit the website here.