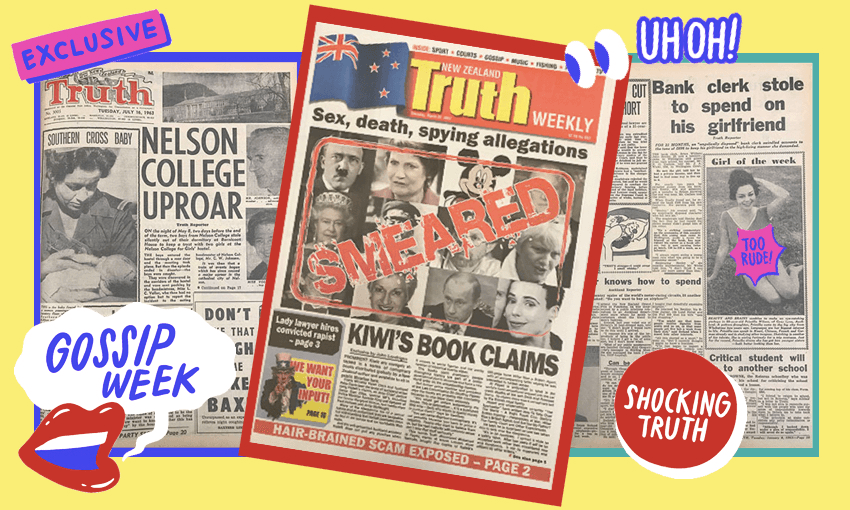 The last editor was Cameron Slater of Whaleoil infamy. The first was John Norton, a Sydney-based newspaperman and fall-down drunk, remembered for lurching around the office with a revolver, firing off a few shots when he felt like it.

This was Truth, the mongrel weekly paper that shook Kiwis awake when Norton launched a local edition in 1905 in an alley off Wellington’s Courtenay Place. Within a few years Norton turned his scandal sheet into a national paper with the biggest circulation in New Zealand, a position it held for much of the 20th century.

Truth might have been an old-school newspaper that left ink on your fingers, but it kept a very 21st century focus on content, especially gossip and salacious celebrity yarns. And it mixed this up with an unruly, fearless blend of sex, crime, divorce cases and radical politics, in time claiming an astonishing million readers a week (though many householders said they only bought it for the recipes).

By the middle of the 20th century Truth was an unassailable media giant; it was responsible for ending the careers of three police commissioners and countless other public figures. Governments bowed to its editorial campaigns and rival newspapers ransacked its innovations.

By the 1950s, the garish weekly had New Zealand owners. Ezra, John Norton’s son, in those pre-flying days, hated his regular visits across the wild Tasman sea to inspect the Kiwi branch offices in Auckland, Wellington and Christchurch. Under local ownership, Truth tapped the pulse of Kiwi populism more strongly. But at the end of the decade, a central part of the Truth brand was in jeopardy.

In 1958, the Nash government stripped the New Zealand press of the right to unfettered reporting of divorce hearings – a Truth mainstay since its founding in 1905. Coverage henceforth would be restricted to the bare bones of proceedings – the parties, the grounds for the divorce petition, witnesses, the decision and the lawyers involved.

As the Divorce and Matrimonial Causes Amendment Act was passed, Truth grumbled about a law “rushed through the House of Representatives at the tail-end of the last parliamentary session”. But a chapter in the paper’s history was ending – no longer could Truth have ready-made sensation on a plate, as seen in this exuberantly written July 1958 special, ‘Wife’s Off-Beat Love Tune in Music Shop’:

“It wasn’t all Beethoven and Bach in a small music shop in Wellington’s Basin Reserve. According to Kazimierz Wala, an agile Polish clerk, one of the traditional versions of a theme on the eternal triangle was being played by his attractive brunette wife and Thomas Clifford Casson, a musical acquaintance of hers. Wala claimed to have tuned in to three disturbing melodies by ‘hiding behind the bassoons, fiddle boxes and music cases’ in a ‘kind of lair’ he had constructed under a staircase in the shop. His subsequent exploits to obtain evidence for divorce proceedings against his wife took him on a bumpy ride in the boot of her car, and later through window-peering, front-garden vigils, with the help of a private detective at his wife’s house in Lyall Bay.”

Righteous outrage over reportage of this kind rippled through parliament as the Bill had its second reading. So why did Labour finally decide to change the law? Hawke’s Bay member of parliament Cyril Harker made mention of “a certain divorce case of a few years ago and the publicity that was given to it all over New Zealand”. It was a reference to the infamous Prevost divorce hearings of 1953, the case that was the spur for Labour’s long-threatened decision to take away newspapers’ rights to unrestricted coverage of divorce. Its chief concern was the increasing amount of divorce coverage in the daily papers. There was also the added bonus of hurting Truth.

In 1953 Auckland high society was stripped bare as millionaire wool broker Charles Prevost brought a divorce petition against his wife Yvonne. High profile radio sports announcer Gordon Hutter was cited as co-respondent. Over two weeks in the autumn of 1953, the public galleries of the city’s supreme court were packed as Auckland’s super-wealthy and their world of hunt clubs, country estates and Daimlers were put under the spotlight. In a sign of a changing post-war world, the dailies feasted on sordid details that were once Truth’s alone.

The rival Auckland papers in particular turned the case into a daily media circus; Truth had to be content with the scraps. The arch-respectable New Zealand Herald, better known for page one headlines such as ‘Cabinet Decides Against Potato Imports’, reported drinking parties in Milford “where the participants gathered in the lounge in the nude”. The rival Auckland Star almost out-Truthed Truth with headlines like ‘Swiss Maid Tells of Seeing Hutter Behind The Sofa’. Such was the interest generated by the case that a teenaged Michael Bassett, later a Labour minister himself, recalls the rhyme chanted at his secondary school:

“Charles Prevost, the perfect host was peeping through the shutter
All he could see was Yvonne’s knees
And the balls of dirty old Hutter.”

Despite Truth’s secondary role in the Prevost case, the weekly was singled out for special criticism during a 1958 parliamentary debate.

Labour attorney-general HGR Mason noted that England had passed laws restricting coverage of divorce cases in 1926. Former prime minister Fraser had unsuccessfully presented a private member’s bill along these lines. The daily press voluntarily followed the restrained British approach, but Mason was concerned that without explicit laws “a competition for creating sensation might be started”. As National Party members cautioned against restraints on the press, Labour member of parliament for Napier, Jim Edwards, took a thinly veiled swipe at Truth, talking of “newspapers that quickly take advantage of the misfortune of people to print stories that will sell their newspapers… it would be better for all concerned if we prevented newspapers making a profit out of the publication of people’s misfortunes.”

The new regime became clear on 14 October 1958, as Truth published ‘From the Divorce Courts’, based on the new rules. Crammed across five columns were 27 separate divorce cases, any one of which could have previously been splashed over an entire tabloid page. With these briefs was a sober caption: “Divorce matters dealt with on these pages are published in accordance with the provisions of the Divorce and Matrimonial Causes Amendment Act of 1958.”

A fundamental if unsavoury part of Truth had vanished. The same edition contained a second portent: “TV by 1960”. Labour was ready to deliver on its long-awaited undertaking to launch a national television service, an innovation that would mount a challenge to print journalism, transforming mass media in the 1960s and beyond.

The above is an updated excerpt is from Truth: The Rise and Fall of the People’s Paper