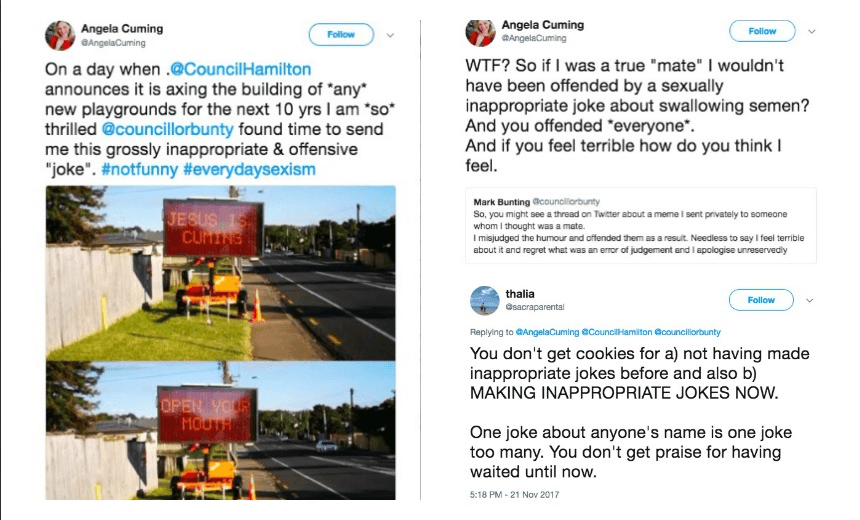 ‘Open your mouth’: 20 examples of sexism in the workplace in New Zealand

When journalist Angela Cuming was sent a “grossly inappropriate and offensive” “joke” by a Hamilton City Councillor she called the behaviour out online. It sparked a discussion about the everyday sexism women face in the workplace, assembled by Emily Writes. Comments, “jokes”, microaggressions, and out-right hostility by insecure men were common. Here are some of their stories, beginning with Angela Cuming’s message from Hamilton Councillor Mark Bunting.

‘He literally sent it out of the blue. I haven’t spoken to him or exchanged any form of communication with him in weeks. Initially I genuinely thought his Facebook account had been hacked and this was a spam message. How I felt? Humiliated. Angry. I cried. I felt defeated, too. I am trying my best as a freelance journalist to cover Hamilton City Council and this is what I am up against. And I felt betrayed. I thought Cr Bunting was one of the “good ones”. I decided to share it online because I’ve been empowered by what’s been happening overseas in the wake of the Weinstein scandal.’

Women are finally being heard and taken seriously about sexual harassment and I now see the value in holding men to account. Even six months ago I would have ignored that message or “laughed it off”. But today – on a day when the same Council he sits on decides to stop building new playgrounds all together – I thought ‘you know what, not today’.

No, this is sadly not the first example of sexism I’ve encountered as a reporter. I’ve copped it all. Had a male colleague tell me not to eat a banana in front of him because it reminded him of oral sex (happily he’s now a news editor so yay!) Had my outfits commented on more times than I care to count (“I’ve always suspected that girl from accounts is a lesbian and seeing her face as you walked past in that short skirt confirms it”).

I’ve been propositioned by people I’ve been trying to interview. I once tried to interview the then leader of the NSW opposition party and he propositioned me. He was married. That story made it to the Sydney papers and it basically ruined my career for a while.

As a junior reporter being called over to a senior male reporter’s desk and he showed me a video of a woman being led into a stable and she was then mounted and assaulted by a stallion (as in an actual horse). That’s something that still gives me anxiety.

What follows are stories which poured in over a couple of hours when I asked for them from women I know. All are from different individuals; all are anonymous.

When I worked as a journalist a colleague who was at most maybe 22 years-old repeatedly called me “love” and “sweets”. He picked this up from older male reporters who I had become used to hearing it from. Something about having a damn-near child talking to me like this made me want to punch a wall. I couldn’t say anything though because I knew I’d be labelled a trouble-maker.

I remember when I worked at a particular newspaper in New Zealand – there was a point where the editor and chief reporter were women, and the two most successful journalists were women. They were called “The Petticoat Brigade” behind their backs. At every turn senior men in the newsroom were bitchy and sometimes tried to actively sabotage them.

I was recently told by a male newspaper editor that I didn’t need to worry about trying to find paid work as a freelance columnist because he understood my husband was about to be given a payrise.

I was told by a senior journalist that women writers write as a “hobby” and aren’t really freelancers – they don’t need to be paid because they all have husbands with “proper” jobs. It was suggested it was a good “bit of fun” for “when the baby is asleep”.

As a teacher, I was told by a male colleague that our year six boys would need a man to teach them because I wouldn’t be able to handle them because I’m a woman.

“Wow, you look pregnant now, you just looked like you were getting chubby before”.

I got told good mothers don’t work as journalists and that those who do – “don’t care about their kids as much” due to the shift work hours and breaking news work.

Every woman knows the old head of news who used to say “sit on my lap” when you pitched a story.

“You met your husband at law school? Ah, that old trick, get them while they’re young and wait til they get rich.”

I was hired to work as a bartender at a golf course restaurant once, and during the interview the hiring manager gave me a ‘tour’ of the facilities. He told me later that it was really a way to parade prospective hires in front of the male kitchen and managerial staff and that they all gave thumbs up or thumbs down behind my back in terms of attractiveness.

When I was 14, I got my first job working in the deli department at Pak n’ Save, working four days a week after school and during the weekend. One of the assistant supervisors in the deli department would always grope my butt when I was in the chiller sorting out food and would make inappropriate comments about my breasts and legs. I only lasted five months in that job before quitting, as I couldn’t handle another shift around him; I used up all of my sick leave when working out my notice so I wouldn’t be around him.

My editor told me to wear a low-cut top to “get a story”. When I objected, he said: “You’re not that good at your job that you can get away with not using every asset you have”.

Former workmates in a bar used to be amazed that I could always predict when the security cameras were turned on (they usually weren’t). None of them knew how to tell. Our boss, a very large man, used to stand in the doorway between the bar area and the floor, drinking and grabbing our bums when we had to squeeze past him. Very occasionally we would have a night when he would wear a clean shirt and make a nuisance of himself by pretending to work with us. Those were the days the cameras were on… His wife was the one who sat and watched them.

The Chief Reporter said I’d only get to keep my work experience job if I slept with him. Heaps of people wanted to work there and I knew he’d just get rid of me if I didn’t. So I did. I needed the work.

I needed a permanent academic job after six years on casual and fixed term contracts. I happened to be pregnant with my third child. My boss said to my colleague: “Why would she want a permanent job? She’s pregnant”. (Have I mentioned it was baby number three and I always came back and performed after my previous babies?). Yet when bloke colleague’s wife was pregnant with their second child, they were in a rush to get him a permanent contract – because someone had to provide for the family.

I got an email from a manager about sorting out a lunchtime BBQ we were doing as a thank you to frontline staff. All of the set up and clean up duties were given to the office administrators (who were all women). It also happened to be the end of month, when they are running all the billing and were flat out. But they just gave them those jobs, because you know, women know how to do that stuff so well.

Former proprietor edited one of the photos of three women (including myself) from the staff Christmas party to crop off our heads and show only our boobs (we were all arm in arm in a row). He enlarged it and hung it above his desk. He frequently told me mine were the best and also criticised the other two for being ‘less impressive’. Visiting national managers and HR people saw it and were absolutely fine with it. The same guy also asked if I planned to have more children or gain weight in my interview.

I’m 54. I’ve worked in the government, not-for-profits and now academia. I am too tired and depressed to start typing everything up. But what about the guy (my boss) who was so outraged that I rejected his gross advances that he told everyone in the office (and in other offices) that the baby I was carrying was his? I left after my baby was born (do I need to say it was my husband’s?) and he kept working there for 25 MORE YEARS. Is it too early for a drink?