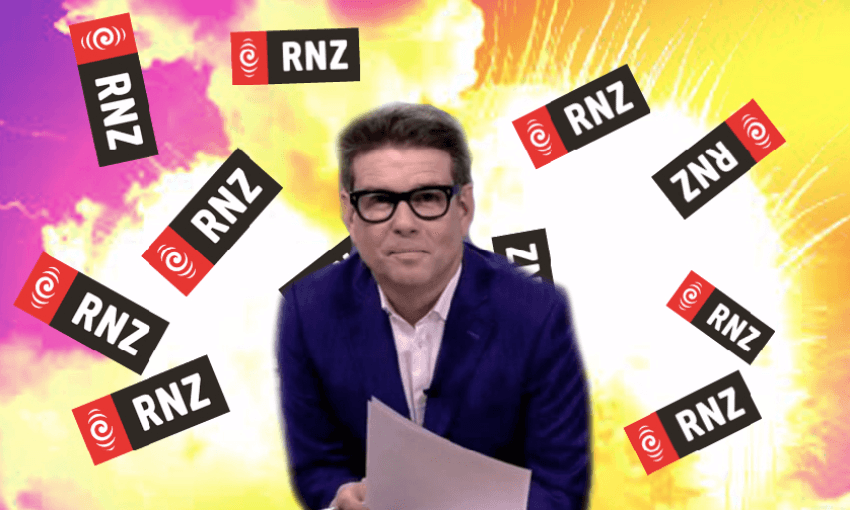 With John Campbell the latest, biggest name to quit, what’s going on at RNZ?

The Checkpoint host’s departure for a new role at TVNZ is the latest blow to the public broadcaster in a tumultuous 2018. Toby Manhire attempts to get his head around it all.

One of the biggest beasts of New Zealand broadcasting, John Campbell will leave RNZ on September 14, almost three years to the day since he joined the national public broadcaster. He’ll be returning to television screens, in a newly created role across TVNZ. It’s more good news for the channel’s current affairs audience, coming after the announcement that Q + A is moving to prime-time, but it’s another blow to RNZ, which has endured a miserable six recent months punctuated by political scandal, budget disappointment and a string of high-profile departures.

In an email to staff this morning, RNZ chief executive Paul Thompson wrote: “John has done terrific, pioneering work since joining RNZ in 2015. He will leave a legacy of high-quality, innovative journalism and improved audience engagement.”

In an accompanying message, Campbell said he was leaving “because after 20 years of being live to air in a studio every weeknight, presenting well over 4,500 programmes, TVNZ want me to do some presenting, yes, but more importantly (for me) they’re asking me to spend much more time in the field. To tell TV stories. To get out of the studio and into the world. And that’s where I really want to be.”

TVNZ announced the news this morning in a press release unforgivably headlined “Marvellous news: John Campbell is returning to TV”. Head of News and Current Affairs John Gillespie said, basically, that he would be doing a little bit of everything.

“John will be a high impact player for 1 NEWS. He’ll file for news and longer pieces for Sunday. And he’s likely to step in to present Tonight, Breakfast, Seven Sharp, Sunday, Q+A and 1 NEWS from time to time.”

At the end of 2017, RNZ was glowing. Ratings strong across the board. Frontline interviewers and correspondents in the form of their lives. Digital operations humming. The growth of the Auckland office in hand. An “all-new investigative and specialist content unit” was in the planning. And on top of all that, at last a broadcasting minister who gave a toss: an energetic, voluble advocate for public service journalism. And there would be money where the mouth was: $38 million of it, after all those years of frozen budgets, for RNZ+, whatever that was.

Scroll down six months and it looks altogether bleaker. A now infamous post-gym coffee between Curran and senior RNZ executive Carol Hirschfeld at Astoria in Wellington offered an early gift for the opposition National Party. Hirschfeld – a highly accomplished media executive who will be best known by many for her time presenting 3News alongside Campbell – was forced to resign after it was revealed she’d misled Thompson about the nature of the meeting. There was speculation (which some insiders describe as overblown) that the fuse for the ultimately explosive cafe date was senior strategic differences about the extent to which RNZ+ might look like a fresh and free-standing television channel, versus an ongoing expansion of cross-platform digital output.

Curran, embroiled in a separate war with RNZ chair Richard Griffin, was publicly chastened by the prime minister. She may have clung on to her job, but not to the $38 million. It was hard not to see the $15 million provided in last month’s budget as a slap on the wrist for the minister. Meanwhile Curran has assembled an advisory group to make decisions that Labour surely ought to have settled on before they took power, while also scurrying from the principles of transparency so enthusiastically promoted by Curran – the minister for open government – in opposition.

For Campbell, the departure of Hirschfeld can only have hastened his readiness to jump. She was the one with the TV background at RNZ, she was instrumental in planning the nebulous RNZ+, with all its television-ish possibilities. She’s also a loyal old friend and colleague. And amid all of that, the administration of the promised RNZ cash injection was looking messy at best.

Campbell’s is just the latest of a string of senior departures, however. The veteran Auckland correspondent Todd Niall announced weeks ago he was leaving for Stuff after three decades with RNZ. Earlier in the year, the award-winning journalist Mihingarangi Forbes quit to focus on The Hui on Three, dramatically diminishing RNZ’s ability to cover Te Ao Māori. In recent weeks Claire Murdoch, head of product and audience development, announced her departure to oversee publishing at Penguin Random House.

Meanwhile the youth-focused and NZ on Air funded website The Wireless, struggling with low viewing numbers and a history of disgruntled journalists jumping ship complaining of dysfunctional management, was quietly read its last rites last month with an internal announcement that its content would be rolled into its parent site. And the promised investigative unit never materialised – although RNZ did this month freshly invite applications for an investigations editor, a year after they advertised for the same role.

Current and former staff say there is no single factor that links every departure and setback. While Paul Thompson has overseen a significant revitalisation of radio and digital products over the last five years, and the digital dimension has grown rapidly, there is said to be a contingent in the newsroom who still resist the idea of a digital-first operation. The change in culture may not be as dramatic or widespread as it had appeared.

Some who have departed in recent months were, according to sources inside RNZ, allowed to leave with very little effort made to find out why they wanted to go, or how they might be persuaded to stay. Many point to a disconnect between the perception and reality of the reborn RNZ: for all the high-profile broadcasters, digital innovation and, especially, the impression of a government windfall, budgets, in real terms, continue to contract. The whiff of extra money – none of which was ever ear-marked for traditional radio operations – “in some ways made it harder not easier,” one source said, “taking the focus away from doing cool shit on a shoestring”.

While Campbell and his programme are liked and admired within RNZ, not everyone welcomed the way the drive-time current affairs institution had been dramatically reshaped by Campbell and his longtime producer ally Pip Keane when he took over in early 2016. Relocated to Auckland and entailing the construction of new video-capable studios and a focus on video content from the field, the innovations and the resources they required caused internal grumbles from some RNZ staffers.

In his note to colleagues today, Campbell urged an ongoing commitment to cross-platform storytelling and seeking to reach a wider audience.

“To those of you who shot pictures on your cameras and on your phones because you understood we connect with a wider audience if we expand beyond 101FM and work to find different people, new people, through Facebook, etc, thank you! (Some of our stories have been watched tens of thousands of times. And more. Not bad for what used to be called Radio New Zealand.) Keep it up.

“I really believe that the NZ in RNZ is about a multitude of voices, a multitude of stories – and whilst we must hold tight to core values, we must also work to find an audience that hasn’t grown up being awoken each weekday by Morning Report (as my two children do, bless them).

“We can do this. To quote Martha Gellhorn, as I always do, ‘our responsibility is the effort.’

“Please tell anyone who says expanding reach means lowering standards that they’re being condescending about the people who don’t yet listen to us. Everyone deserves RNZ! Everyone deserves journalism that treats them, and the world they live in, with enough respect to take them seriously.

As for the future of the Checkpoint, Thompson underlined that there would be no reversion to the previous format.

“Checkpoint will continue as an Auckland-based multimedia news and current affairs programme under a new presenter. You will still be able to watch and listen to Checkpoint – live and on-demand – on multiple platforms.

“Checkpoint has been a flagship show for RNZ for more than 50 years. Long may that continue. Glen [Scanlon] and I will support Pip and the Checkpoint team as much as we can during the transition to a new presenter.”

Who is lined up to succeed Campbell? Anybody at all, if Thompson’s late morning tweet announcing the star’s exit is a guide. “RNZ are looking for a great new presenter for the show,” he posted. “DM me if interested.”