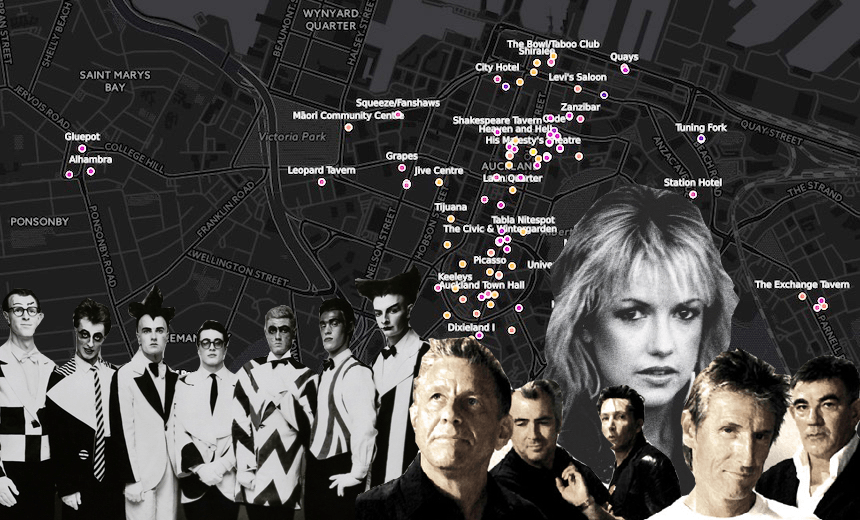 Gareth Shute asks for your help in creating a map of all the venues that have existed in Auckland, from the early 20th century through to the present.

With less than a month before the Volume exhibition closes, Auckland Museum has posted a series of extended reads on their website on subjects including fashion in the music scene and New Zealand songs of rebellion. One of these essays is ‘Live and Direct’ by Kelly Dix, a look back at the different places New Zealanders have gone to see music performed live.

After reading the essay (and remembering that this month is NZ Music Month), I decided it’d be a good time to present a project I’ve been working on for a couple of months – a historical map of Auckland venues divided by decade. Data viz genius Chris McDowall created a prototype map to display the data that I’ve gathered so far and we hope to construct a more comprehensive version once readers like yourself have had a chance to give us feedback.

View an initial version of the map here and suggest additions/corrections on The Spinoff Music Facebook page here.

For now, let me point out a few interesting elements that jump out when you scan through the decades on the current version, starting with pre-1950s view:

Chris Bourke’s book Blue Smoke has some great tales about the top jazz-era venues, though pinpointing their location is still rather difficult. Nonetheless it’s clear that many of the early dance halls were outside the central city, most notably the beachfront venues: Dixieland II in Pt Chevalier, Nixon’s Cafe in Mission Bay (with Tamaki Drive still unbuilt, it was a 45 minute bus ride over unsealed roads), and Ye Olde Pirate Shippe in Milford (actually built in the shape of a pirate ship!).

The tendency towards venues outside the central city may have also been driven by other factors beyond our love for the beach. Travelling around the city was difficult (for example, there was no harbour bridge until 1959) so having localised venues made sense. It may have also been a question of space: dance halls needed to be larger than most modern venues as music was performed primarily to accompany dancing with a partner in a formal style, rather than the audience cramming together to focus forward on the performers.

It was only with the arrival of rock’n’roll in the late-’50s and early-’60s that venues began to gather around Queen Street. Yet at least half-a-dozen of the venues that existed in the ’60s are very hard to place. The Downtown shopping centre required demolishing the Galaxie/Shiralee, The Bowl/Taboo Club, and the Beatle Inn, while the redevelopment of Mayoral Drive (creating Aotea Square) makes it hard to pinpoint where Picasso, Crypt and Hatchets/Aubrey’s actually were (in fact, I’ve read one suggestion that Aubrey’s and Crypt might have been the same location). Some of this destruction has been broadly catalogued in this nationally-focused piece on Stuff and this piece by Graham Reid (also related: Reid’s historical reflection on the Auckland music scene).

As Kelly Dix points out in her essay for the Volume exhibition, the music scene was molded by changes in licensing laws over the decades that followed. Most venues were unlicensed until 1967, when early closing (at 6pm) was abolished and bars could generally stay open until 10pm. In 1971 a further extension was added which allowed bars that served food and offered entertainment to apply for a coveted ‘cabaret license’, allowing them to stay open far later (this was one reason why Mainstreet became a key venue in the early ’70s).

In the ’80s the scene was changed again by the arrival of nightclubs, where the DJ was increasingly seen as a creative talent in his or her own right (starting with Peter Urlich and Mark Phillip’s A Certain Bar). While these may have seemed more like discos than performance venues, they soon became places for electronic/dance music producers and hip hop acts to present their work. Nightclubs got a boost in 1989 when licensing laws were liberalised further and all night opening became possible.

Over the past two decades venues have had to compete for space with apartments, now that Aucklanders are more comfortable living in the central city. Rents are high and noise complaints are increasingly common. On Symonds Street, the locations where @Luna/Kurtz Lounge and Frisbee Leisure Lounge used to exist have now been replaced by apartments; the same is soon going to happen to the King’s Arms. The end result has been that, eight years into the current decade, there’s fewer venues near the central city than there has been since the ’50s.

This is the point where you come in. We’re hoping you will have a good scan of the map we’ve created and offer more ideas via our Facebook page. It’s been quite a task trying to pinpoint where particular bars were located and which period they were open. Hopefully we can add more information as we go along, improving my very rough descriptions, sourcing new images (plus attributing them correctly), and adding more appropriate links. So please let us know what you’d like to see.

View the prototype map here  (best viewed on a laptop/PC, otherwise tilt your phone to see the menu for time period)

View the list of venues as a spreadsheet here

Also, get along to the Volume exhibition before it closes on 22 May and check out pictures of iconic venues (in particular on the wall next to the playable instruments) and dozens of historic gig posters from these iconic venues, mostly displayed within the mock record store in the middle of exhibition.