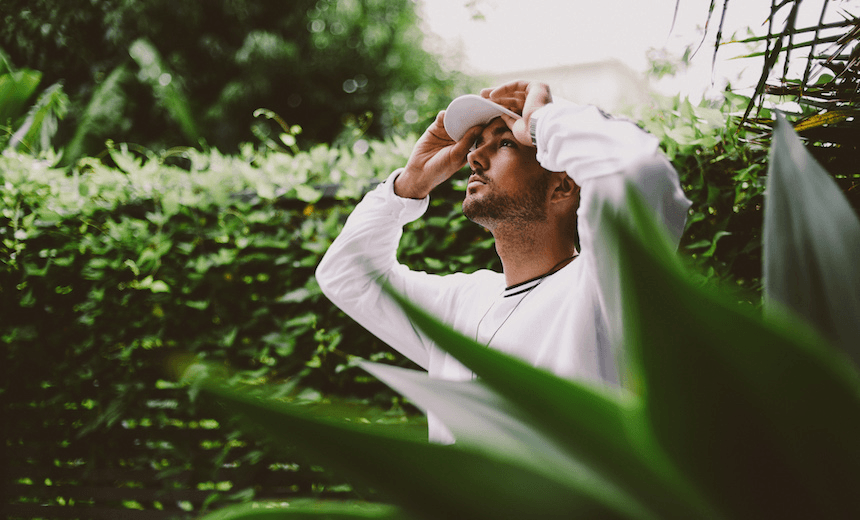 If he gets his way, Rei will be a name you’ll be hearing a lot more often. Hussein Moses sits down with the up-and-coming New Zealand artist to talk about his new album and how he’s working to bring te reo outside of the classroom and into the world.

Whether it’s the message he’s trying to send or the genres he employs to do it – hip-hop, R&B, pop, dancehall or reggae – every detail on Rei’s new album A Place To Stand feels painstakingly considered. Even his album cover, which is a portrait of him framed up and hanging on a wall outside, is something that speaks to the philosophy behind his music.

That won’t be a surprise to anyone familiar with him. When I first came across Rei – otherwise known as Callum Rei McDougall – just over a year ago, it was clear that he had thought about everything that goes into rolling out his music. He wasn’t just pushing out links with no direction like a lot of other stuff that tends to land in my inbox. He has a slick online presence and since he looks after his promotion himself, it’s important for him to get it right.

That mindset explains a lot. Dive into the record and you’ll find someone who sounds invigorated by the challenge of making a name for himself – like he does on ‘These Hands’ and ‘The Chief’s Speech’ – but stay a little longer and you’ll see just how versatile he can really be. This is a hip-hop album, first and foremost, but one of its finest moments arrives with ‘Mix’, a dazzling acoustic-led slow-jam that’s as introspective as it is impressive. The song, along with many others, would slide in comfortably alongside anything you’ll hear on the radio right now. It’s a wonder they haven’t already.

Rei’s based in Auckland but grew up in Wellington. It’s hard for the 23-year-old to pinpoint when he decided to take music seriously, but the first moment he thought it could be a possibility was when he started doing hip-hop dance while at primary school. He got an instant buzz from performing on stage and scoring a reaction from the crowd drew him in even further.

By the time he got to high school, he had picked up the guitar and was already making beats on some software he downloaded on his mum’s computer. He also did kapa haka and even linked up with his school choir, which he admits might come off to some as slightly out of character. “Being in the choir at college sounds real middle-class Pakeha, but we did heaps of cool stuff. We learned heaps of Island songs, cool Samoan songs, and Māori songs. We learned songs from all over the world.”

When I ask what it was that inspired him to try out hip-hop, he laughs. “Most teenagers wanna rap,” he says matter-of-factly.

Rei wouldn’t have to go far to find something he liked. “I’ve always looked up to local rappers,” he says. Scribe’s debut album The Crusader was one of the first CD’s he ever owned and a few years later his attention would turn to artists like David Dallas and Home Brew.

But it was tough for him to find New Zealand hip-hop artists that were incorporating culture and identity into their music in a way that he could really connect to. Māori culture is part of who we are as New Zealanders and it’s something that sets us apart from everyone else in the world, says Rei. That’s something that’s reflected in the album title too as A Place To Stand is a reference to tūrangawaewae, a phrase that emphasises the importance of staying connected to where you come from.

“A Place To Stand is me being proud of where I’m from and proud of Aotearoa,” he tells me. “It’s also referring to my place in the music industry and where I’m trying to build and trying to make my own niche and carve my own career out.”

So far, so good. Though he might not be a household name just yet, he’s already seeing where his music can get him. He’s won two Waiata Māori Music Awards, one in 2015 for Best Urban Album and another last year for Best Music Video. “I really didn’t expect to be embraced as much as I was by the Māori music world,” he says. “It was awesome. The first award speech I’ve ever done for my music, I got to speak te reo. And people understood me. That was pretty big for me.”

Growing up, Rei says he remembers being dragged along to his mum’s Māori lessons. He would go onto graduate from university with a major in te reo Māori, but says he still struggles to find a way to normalise how he uses it day-to-day.

“It’s the same thing with Mum: she’s just learned it, so she hasn’t always been that strong at using it around the home. We get lazy and we don’t really talk in Māori when we’re just spending time with each other. That thing of bringing te reo outside of the classroom and into the normal world is a struggle for me, which is why I try and do it as much as I can.”

Another thing he does as much as he can is write music. He self-produced everything on A Place To Stand, something which he says gives him an advantage when the time comes to get to work. When he hears a beat in his head and wants to make something, he can just sit down and do it. Other artists have to find a producer and then try and explain to them what they’re hearing, he says. “A lot gets lost in translation. I don’t need to do that.”

All up, he recorded an astounding 60 songs for the album and he’s already got 15 demos down for the next one. He’s trying to collaborate more on his next project because he says things can get a bit lonely when you’re working by yourself all the time.

Perhaps by then, he will have truly found his place to stand in the local music industry. For now, he says, it doesn’t feel like he fits in anywhere in particular. “I don’t know if the outsider thing is something I chose, or if it’s just something that happens.” Either way, he still sees it as an advantage, even if it’s there’s always further to go.