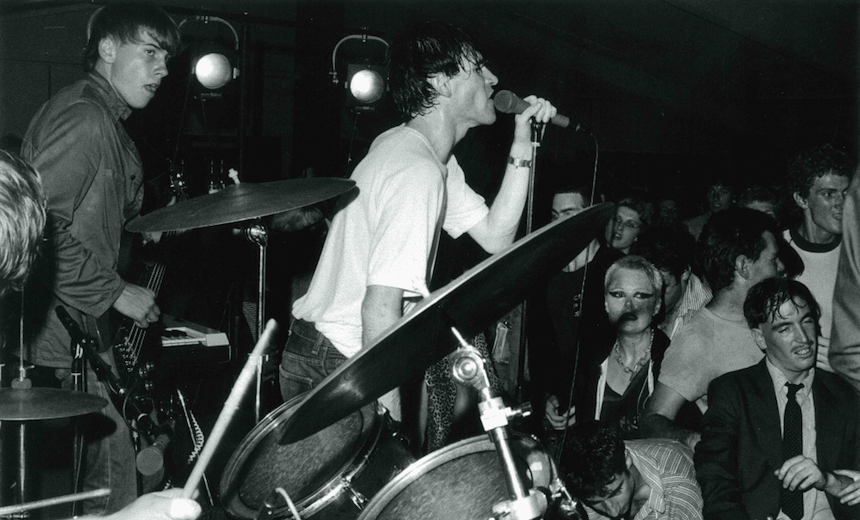 In praise of the moshpit: Photographing Auckland’s punk decade

Adrian Hatwell talks to photographer and Rip It Up founder Murray Cammick about his exhibition AK 75-85, on now at Black Asterisk Gallery in Auckland.

That’s what Auckland photographer Murray Cammick tells me of his latest exhibition, AK 75-85. But after a quick look at the images on display, I think he might be wrong.

The series features candid black-and-white photos shot by Cammick while covering the Auckland scene as a music journalist during the 10 years when punk and new wave slammed enthusiastically against the established music scene. Folkloric punk bands like the Scavengers, the Suburban Reptiles and Toy Love are featured alongside visiting icons including Iggy Pop, Debbie Harry, Siouxsie Sioux and Johnny Ramone.

Ebullient crowds, sweat-slicked moshpits, off-stage camaraderie and long-gone punk clubs have all been lovingly seared into Cammick’s Tri-X film. Even the exhibition’s name is a callback to Ripper Records’ AK79 compilation, the essential audio chronicle of Auckland punk. It may not be a punk show to the photographer, but viewers could hardly ask for a more intimate glimpse into the early days of that scene

When Cammick, fresh out of Elam art school, co-founded Rip It Up magazine in 1977 he created for himself the perfect opportunity to document Auckland’s nascent music scene in all its anarchic glory. He says his photography lecturers weren’t keen on the idea of one of their fine arts students dedicating themselves to the lowly art of music photography, but photography and music both had long been entwined passions for Cammick and he had no intention of separating them.

And a good thing it was for Aotearoa’s gestating alternative music scene. The mid-’70s saw an explosion of confrontational new bands in the US and Britain, railing against austere social conditions and suburban malaise. For music fans wary of bloated mainstream acts and hungry for bands with something to say, the anti-establishment, do-it-yourself swagger of punk was a shot of adrenaline. And, after the requisite antipodean delay, that energy soon found its way to the streets of Auckland too.

While the impact of punk and new wave music was raucously evident at alternative inner city clubs like Zwines and Mainstreet, and in community halls and sporting venues repurposed for a night of zealous youthful release, the local press were willfully blind to the creative chaos. “The mainstream media didn’t really have a space for it,” recalls Cammick. “Even if music reporters were interested, newspaper editors were not.”

But Rip It Up always was. With the exception of TV2’s Sunday music show, Radio with Pictures, which covered the local and international rock bands, Cammick’s publication was the only game in town when it came to information, imagery and interviews with the influential players of the alternative music scene.

Cammick was the magazine’s first editor, but he was happier as a photographer. A ubiquitous presence at any gig of note, camera always in hand, he captured Auckland’s musical community with a documentary-like commitment to authenticity.

That approach was the same whether he was shooting The Scavengers throwing back tall cans at Parnell’s Windsor Castle or international acts well on their way to becoming rock ‘n’ roll royalty. In fact Cammick’s underground sensibility, combined with Aotearoa’s far-flung charm, often resulted in a unique kind of extemporary portraiture that flew in the face of rock star posturing.

Many of the big cultural figures of the exhibition were captured at a time before the rest of the world had quite figured out how important they would become. One portrait of Blondie’s Debbie Harry shows the soon-to-be international star sharing a copy of New York’s Punk magazine with one of Rip It Up’s reporters. Cammick loves this shot for the way it captures a moment of shared enthusiasm for the community both subjects belong to. “There’s no ego to it, just genuine excitement.”

Another portrait shows Harry in a downbeat moment; as stunning as ever, but still a young woman weathering extensive travel and media commitments. Hours after the shot, she would head to Australia for more press duties, and the Aussie music show Countdown would (allegedly by accident) play the video for Blondie’s b-side track, ‘In the Flesh’, rather than the planned single, ‘X Offender’. That was the spark to a fire that would propelled Harry and her band to global stardom.

Coming out to play at the very edge of the world was often a surprisingly significant experience for many international acts at the time. Iggy Pop was trying to jump-start his career for a third time in 1979; the US music industry didn’t know what to do with him, but the New Zealand industry received the iconoclastic punk with open arms. In the US, The Ramones were playing any venue that would take them — bowling alleys, lumberjack bars — but visiting Auckland in 1980, they got to play the world-class Logan Campbell Centre, like a real, grown up rock band.

It’s not all punk in AK 75-85. Cammick is a dyed-in-the-wool soul man, and some of his own personal heroes from the foundational days of rock ‘n’ roll also feature, including a bare-chested Little Richard and the legendary Ray Charles. The punk bands who committed to the stripped-back, raw energy of these rock pioneers are the ones who spoke to him most forcefully. He says he witnessed many music labels make the mistake of over-producing their punk and new wave acquisitions, choking the vibrant garage energy with fanciful recording technology (a mistake Cammick admits to occasionally having made in his own independent label endeavours, Southside and Wildside Records).

Even if one has no real interest in punk and new wave music, there’s plenty to enjoy in AK 75-85. Images from 1979 of Bob Marley (no stranger to a punky reggae party himself) being welcomed with a pōwhiri and playing soccer on the lawn of Parnell’s White Heron Hotel feel like they carry a historical weight that goes beyond pop music. But an affinity for the barricade-storming ethos of punk history certainly imbues the gritty series of black-and-white shots with an uplifting lust for life.

Asked which of his images he thinks might be the most culturally important in hindsight, Cammick points to images of The Screaming Meemees, from Auckland’s North Shore, playing to a packed suburban hall. The photographer recalls his first experience with a moshpit, worried they would be looking for bodies come show’s end. Now he looks back on the images, filled with bodies heaving in fervor, and sees them as testament to young people finding a place they can express themselves, a community to which they can belong, and rituals to demonstrate their enjoyment of life.

“I don’t understand youth suicide, I don’t understand a lot of things,” muses Cammick. “But I’m in praise of the moshpit. There’s something about seeing people simply enjoying themselves, having a good time, that recharges my batteries.”

A lot of what Cammick documents in this exhibition has long since past and, despite a lifelong passion for music, he admits to being out of the loop when it comes to today’s new bands. But he’s confident that the spirit beneath the blood, sweat and spit of Auckland’s punk mosh pits is something that can still be found by those who seek it.

Sorry Murray, but I think this might be a punk show.

AK 75-85 is on at Black Asterisk Gallery in Auckland until 22 August.