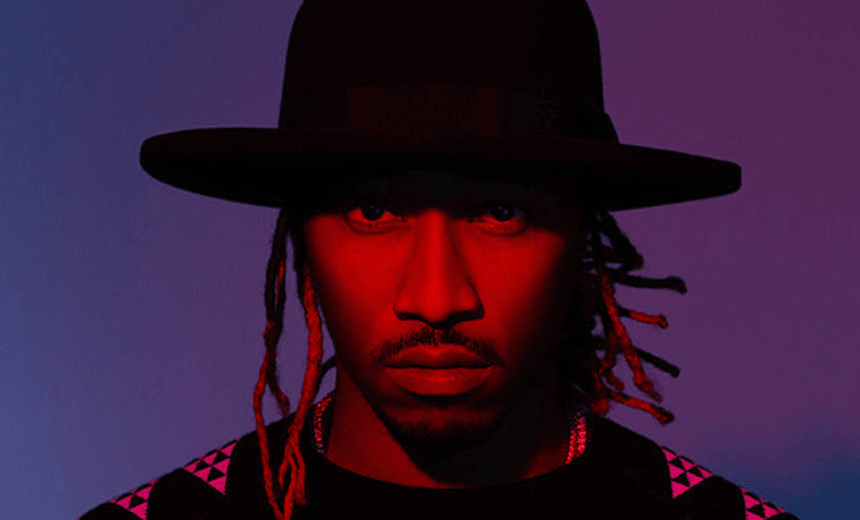 ‘He’s outperforming himself at a level matched only by Beyoncé.’ Why Future is the future of music

Futurehive member Miriama Aoake guides you through the world of prolific rapper and chart history-maker Future.

Nearly eight months has passed since Future’s last release, Project ET: Esco Terrestrial, a project alongside longtime producer, collaborator, and fellow ATLien, DJ Esco. The post-Ciara era of 2014-2016 saw Future at his most prolific and hungry: Monster, Beast Mode, 56 Nights, Dirty Sprite 2, What A Time To Be Alive, EVOL and Purple Reign proved Future’s self-awareness of his work and vision, and signalled a return to his pre-fame era. But an eight-month absence – a long time in Future’s world – created a vacuum. Murmurs of an impending project were confirmed when Future announced a 17 track self-titled album to coincide with his Nobody Safe tour.

Released on 17 February, Future went straight to the top of the Billboard charts. Then just a week later, while audiences were still processing Future, Hndrxx (pronounced ‘Hendrix’) was released, a move akin to Sweat/Suit era Nelly. Future’s extensive body of work has ensured fans won’t die of thirst, but the release of two new albums summoned a monsoon. The drought is over, even though it never really began.

When Monster was released in 2014 it was a welcome return to the ‘old’ Future. Prior to the demise of his relationship with Ciara, Future had been headhunted by Justin Bieber, Miley Cyrus, and Rihanna. The hallmark song on Rih’s Unapologetic is ‘Loveeeeeee Song’, which Future co-wrote and appears on. He sent four or five demos her way, which means there’s three or four songs we haven’t heard. In 2013 he gifted Beyoncé that ‘Can’t keep your eyes off my fatty, daddy I want you’ melody for ‘Drunk In Love’. Future still has a Rolodex of A-listers across the Billboard spectrum, yet his features on his solo projects are sparse to nonexistent.

Before Monster was released, the Futurehive (collective noun for Future stans) had begun to worry that their Future would ever come home. It became apparent he was frustrated by the scrutiny that comes with mainstream success and a high profile relationship. After the birth of their son, Ciara and Future split with competing theories emerging as to why. Both parties remained tight-lipped but it was understood, at the time, to be an amicable split. A few months later, Monster dropped and raced to double-platinum status. The ire and hurt shadowing him was exorcised and contained in every verse. No track could be isolated as more or less prominent than the other. Future crossed the threshold into the pop realm and returned stronger, more vociferous. In mythology, this is a deed that guarantees immortality.

2015 and 2016 were littered with features and an onslaught of mixtapes. ‘March Madness’ from 56 Nights was one of the most important contributions to music in the last decade. A year later it prompted Kanye to confront the Grammys’ lack of recognition for black excellence, tweeting, “Has anyone at the Grammys ever heard March Madness??? Yes I have a problem with the Grammys.” The collaborative album What A Time To Be Alive with Drake debuted at number one and reached platinum status; their joint tour Summer Sixteen became the highest-grossing tour of all time. Drake’s co-option of Future’s wave turned out to be a mutually beneficial move. Drake distanced himself from Meek Mill’s accusations of using a ghostwriter, while Future secured another jewel in his Hublot crown with ‘Jumpman’.

And now Future/Hndrxx. Considered as a single work, it signals a departure from either pop or trap designations by marrying both (like Real Sisters from DS2). Read together, the albums exist in the liminal void between pop balladry and smutty hooks, activating both to resist categorisation. This ‘betweenness’ is a space of potential, and Future consistently breaks that ceiling. As of this week, Future/Hndrxx sits at the number one (Hndrxx) and two (Future) on the Billboard album chart, making Future the first artist to replace their own new-release album with their next album, and the first since Prince (may he Rest in Purple) to hold the top two spots.

The production on Future features several members of the united trap-bloc 808 Mafia – Southside, DY, Tarentino, and Sizzle; as well as Metro Boomin, Zaytoven, DJ Spinz and Khaled. ‘High Demand’ and ‘Super Trapper’ are trademark DY: understated, off-centre, galactical with Pluto in the first house. Metro Boomin-produced ‘Mask Off’, meanwhile, has prompted the inevitable flow of memes inspired by Future’s hum of “percocet, molly, percocet” over that ‘final boss’ flute. Gucci Mane has said Future isn’t a lyricist, which is precisely what makes him so lyrically enigmatic. He can construct a melody from everyday sonic interactions, such as the sussuration of an airconditioner; hawk “Tom Brady, Tony Snow, I just back-do’d yo hoe” and simultaneously hit two-tone jabs of “mhmm” to frame every bar on ‘I’m So Groovy’.

Hndrxx, by contrast, is 17 tracks of tonal ambrosia. Future has mastered the duality of pop and rap, like his contemporaries Nicki Minaj and Drake. Where Future’s music differs is in its truthfulness, its representation of a lived experience – a presence that is missing from much of the output of his peers. The number one most added song on Apple Music in the past week was ‘Selfish’ featuring Rihanna, their first collaboration in five years, reviving the chemistry so evident on ‘Loveeeeeee Song’. The Weeknd features on ‘Comin Out Strong’, which feels like an ode to the path the Toronto native should have taken post-House of Balloons. The outro on ‘Comin Out Strong’ mirrors the final 30 seconds of ‘Throw Away’: both are a window into the ache of a broken heart. On ‘Damage’, Detail croons “Girl you know that it’s truuuue” on the hook while Future flips off every bar with speed and vigour. ‘Damage’ establishes itself as emblematic, weaving every facet of Future’s complexity together between the pop/trap symmetry others struggle to reach and therefore imitate (cough, Desiigner).

Future and Hndrxx categorically refuse to be compartmentalised and demand an all or nothing investment. To compare the two is futile; doing so wrongly asserts they cannot coexist as complimentary halves. I don’t think, in any lifetime, it will be possible to dissect the nexus of Future’s genius; we cannot comprehend the span of his other-worldly potential. Right now, he is outperforming and competing against himself at a level matched only by Beyoncé. As a chief propagator of Atlanta’s declamatory legacy, Future belongs in her league. Any release from Future requires days and weeks to process before dissecting. Future and Hndrxx are a testament to a veracious Futurehive proverb: there’s no such thing as a bad Future song.