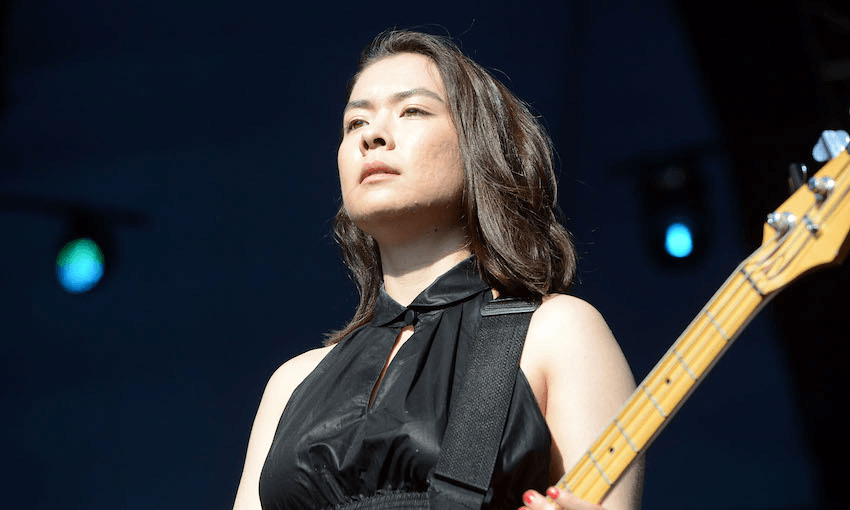 Later this week, Mitski releases her fifth album, the excellent Be The Cowboy. Amanda Robinson talked to the singer-songwriter about anxiety, loneliness, secrets, cinema, and love.

Mitski Miyawaki is set to release what she’s calling her saddest album yet, but Be The Cowboy is not the singer-songwriter’s first rodeo. After the steady, concentrated success of her first three records, Mitski became an indie rock staple with the release of her fourth, Puberty 2, in 2016. Since then she’s been on her own world tour and opened a stretch of Lorde’s Melodrama tour. Now Mitski is back, with a little less distorted guitar and a new outlook on loneliness.

When writing and recording the album, Mitski says she continually came back to the same image: someone alone on a stage, singing solo with a single spotlight trained on them in an otherwise dark room. It makes sense then that the album revolves around feelings of isolation, the war between wanting to be seen and wanting to hide away. Produced with longtime collaborator Patrick Hyland, most of the album’s fourteen tracks resist too many layered vocals in an effort to exaggerate this lonesome image. Her lyrics, too, are as direct and concise as ever, cutting to the heart of an emotion again and again. In ‘Geyser’, her first single from the new album, she simply switches one word between verses; “you’re the one I want” becomes “you’re the one I got”; to visceral effect.

Inspired by Isabelle Huppert’s character in Michael Haneke’s The Piano Teacher, Mitski uses Be The Cowboy to consider her own feelings of repression, desire, and controlled unravelling. She describes the album’s title as an inside joke with herself, a half-serious mantra to “be the cowboy you wish to see in the world”. I spoke to Mitski about anxiety, loneliness, secrets, cinema, and love.

How are you feeling a month out from the album release?

I’ve known it was going to come out for a long time now, and I made it a while ago and I wrote it over a long period of time, so my brain doesn’t really know how to process it. It almost feels like some kind of momentous birthday or the start of a new job or something, I don’t really know what to expect.

You’ve said that when you recorded Bury Me At Makeout Creek you were thinking about how to get people’s attention and then with Puberty 2 you wanted to do whatever you wanted. What were you thinking about when recording Be The Cowboy?

It was the first album that gave me a great amount of anxiety because for the first time I was actually fully aware that there will be people who listen to it. For Bury Me At Makeout Creek and Puberty 2 there never was a full recognition of that fact, so I tended to just make whatever I felt like making, and it totally made sense to just write what I felt. For Be The Cowboy it was suddenly like, oh my goodness, there are expectations now. That gave me a lot of anxiety but I think, I hope, it has worked in the album’s favour, that thought process.

Did you have someone you were writing the album to?

I was still writing for myself. I think I will always be selfish and write for myself, that’s essentially why I do this. But I think I’ve done thousands of these interviews and I’ve been asked so many different questions that now, when I write, all those interview questions are kind of like on a ticker in the bottom of my brain, just constantly running. There’s always that sense of criticism while I’m writing now, or expectation of criticism, or just trying to answer the interview questions while I’m writing the songs. Or thinking, how do I explain this? Why am I doing this? Just thinking a little more deeply about what I’m doing. That, in a way, could be interpreted as someone I’m writing the songs to. It’s not directly to the world or the media or anybody, but I think it’s more a general awareness of objectivity.

In ‘Remember My Name’ you say you need someone to remember you and in ‘Nobody’ you sing that you’re so lonely you open a window to hear sounds of people. How has your relationship to loneliness shifted since your last album?

It has changed a lot. The time when I wrote ‘Nobody’ was last year in December, changing over to January right during the holidays. I went to Malaysia because I played Australia, I’m so sorry I didn’t play New Zealand! I’d just finished a two-year-long tour of the world and it ended in Australia and I was looking at plane tickets, and it was much cheaper to stay on that side of the world than to try to fly back to the US right before the holidays, those holiday plane tickets are crazy. I just decided to go pass the holidays in Malaysia. I spent some of my childhood there so I thought I was quite familiar with it. I went alone because I always considered myself a solitary, independent person. I thought I liked being alone. But then actually being completely alone in a country where there’s not one single person who knows me, and it being the holidays and all my friends and family being with each other and me being alone in Malaysia, I felt this intense loneliness that I’d never really felt before, or maybe I’d just kind of ignored. And that’s where that song ‘Nobody’ comes from but it was also a turning point where I realised I need people. I never thought I needed people but I realised I actually get lonely, and it’s not just this vague, existential loneliness, it’s a very visceral, real, literal loneliness.

In quite a few songs on this album, I’m thinking especially of ‘A Pearl’ and ‘Lonesome Love’, you sing about this distance between you and a lover, not always in a tragic way but more in a secret way. How important is it to you to keep some things to yourself?

On both Bury Me and Puberty 2, the final tracks talk about a neat and tidy death. In ‘Two Slow Dancers’, the final track on this album, you end with these two people being the last ones to leave a high school reunion, which I guess is a kind of death too. What note did you want to end the album on?

I made that song and I couldn’t imagine it anywhere on the album except at the end. It’s a very ending kind of song, because in my mind it’s at a high school reunion, and it’s two older people who used to love each other or have a history, having a little moment where they’re dancing together pretending they’re young, but they’re not. You can’t change the past, you can’t redo your life. I guess the reason it’s on the end of the album is just like, let’s feel this dream a little bit but also know that it has to end and there’s the real world out there at the end of this dance. I felt like that was appropriate for the end of an album.

The album art by photographer Bao Ngo is beautiful. I read that you enrolled to film school and the art feels very cinematic. How did you approach these visuals?

I was drawing from the movie The Piano Teacher by the director Michael Haneke, based on the book of the same name by this author Elfriede Jelinek. The main character in that was very much an influence in terms of clothing, as well as a lot of Hitchcock films. Essentially I kind of wanted to express being a mysterious, a little bit repressed woman, who perhaps has some kind of chaos inside her. I drew from those inspirations and figured out what kind of imagery I wanted, and then I asked my photographer friend Bao and I told her all the scenes I wanted to do. I guess I did call them scenes, so it was a very cinematic idea. Then she realised them and she introduced me to her friend Annika White, who got the clothing based on our ideas. It was very inspired directly by cinema.

You’ve said love is worth it. Do you still believe that?