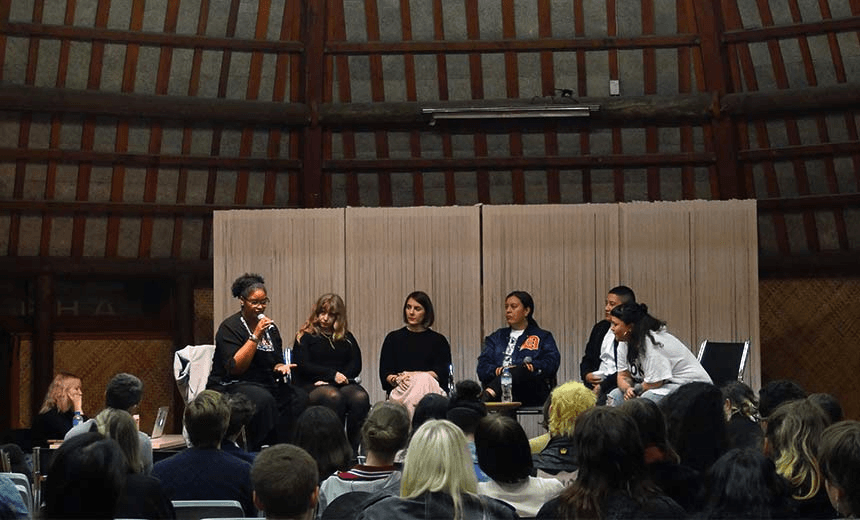 Equalise My Vocals: A Retrospective

By Coco Solid
Guest writer
Made possible by

After last month’s Equalise My Vocals events on gender equality in music, Coco Solid reflects on the project and shares video and audio of the panel discussions.

Equalise My Vocals was a project about everyone being treated fairly within all factions of New Zealand music. That’s it.

Over a year in the making, the project – including the online interview series and a two-day music-and-discussion event – was made possible by 50+ crowdfunding contributions and a fuckload of toughness. An overwhelming project in terms of how many feathers it ruffled, it was also lean on resources. Thankfully, fiscal support and resources were contributed by people who were less concerned with ticking boxes, cultural capital, government obligations or moving units. This was a project that wanted women, transgender, non-binary people, and survivors – at all levels of local music – to feel heard and to feel safe. This was simply an attempt to have a sincere discussion that prioritised these ideas; it wasn’t anything necessarily new. Except for the unfortunate fact that it kinda was.

The kaupapa of this event was to transcend the excuses of a ‘music scene’ or ‘industry’ and for a brief moment actualise a community mentality. A community that pools energy, care, labour and resources among its actual members. This begins with sharing stories, because recently too many overlooked stories had finally started to emerge.

People now have access and online visibility when talking about problems that affect them. Locally we have seen people discuss exclusion, being under-estimated, being stigmatised, patronised, verbally abused, groomed online, manipulated and sexually assaulted. All because they had the nerve to make or enjoy music. It might not be ready to face what it markets, but the New Zealand music industry is fraught with dysfunction and inequality.

I think this is because it has never stopped to inspect itself honestly. This small industry has never interrogated where the resources have gone vs. where they are desperately needed. For months leading up to the panel talks I was told I was a feminazi looking to kill art, a social justice warrior buzzkill – but that stuff never presses me. I was also told by the apathetically hip that I was corny and naive for even attempting to do something like this. “It’s just the way it is.” Now that offended me. I am glad I didn’t take these appraisals as gospel, I would have missed out on one of the most powerful weekends of my life.

I approached a range of local music institutions who are financed to support the music community before being driven to put this project together myself. I asked these groups to be more invested in gender equality and a connected myriad of problems, even offering to help them facilitate something. To me, the responses and feedback of Equalise My Vocals is proof they should have, because NZ Music Month got well and truly hijacked by the people who wish to see it authentically improve. Some people came to the party, some predictably didn’t. I just hope someone learned something from dozens of creative and experienced people screaming some remarkable anecdotes and solutions in their faces.

I feel the need to also address the organisers of panel events and lecture-based festivals in this country: do not tell me it’s difficult to build a panel of only women/non-binary people. It’s not. Do not tell me that you can only have one token brown person on the panel. You can have a two-day festival with people of colour comprising over 50% if you try. Stop being superficially invested, lazy and dishonest with who you hand the mics at these events – your various supremacies are showing.

I ask everyone with any psychic stake in local music to listen to these conversations. They were a heady mix of intimate, blunt and electric. The live show that night at Whammy Bar backroom was equally as alchemistic. It made me retroactively furious that we haven’t been prioritising women/trans/non-binary performers and workers this explicitly until now. But the inspiration that came from this project has stabilised my outbursts a bit.

At the talks, we had a kaupapa that when discussing exclusion, invisibility, limitations, and assumptions (as was inevitable) we had to counteract this. We needed to unpack ideas around inclusion, visibility and freedom, and what solutions could look like too. The drive was to step away from injustice and scarcity and reimagine what justice and abundance within this medium might look like for New Zealand. We are small enough to feel that aroha and impact. It was this productiveness and positivity in our korero I think that made this weekend really magic and different from the rest. A lot of beautiful friendships got made, and in music, friendship can mean everything.

Equalise My Vocals was just one small project in a small country over one weekend. I’m not deluded. I didn’t expect anyone to have a primal awakening or a revolution to rupture outside Samoa House after we had the talks (although I didn’t discourage that). We simply wanted to see new mini-worlds, conversations, connections, online groups, ambitions and frameworks come from it. Me and my co-director Trixie Darko (who I owe a planet of thanks for her emotional, physical and psychic labour) simply wanted to know that we contributed something, anything, to a paradigm shift within local music. Thank you to the Spinoff for all your support, all of the people who helped us pull the event together, all of the amazing panelists, people who made contributions to the crowdfunder and those who physically showed up. We will be moving the project to the digital stage but maybe we’ll see you in the future…. a safer more diverse one we’d hope.

This is a crucial, bleak, thrilling, daunting and fertile point in human history. No matter what medium or industry you work in, be the canary in the goldmine, retaliate when shit ain’t right, hold authority and purse-string holders accountable and stick up for each other. Before it’s too late…. but it’s never too late.

Below is a selection of video excerpts from each day of the panel korero, followed by the full audio of each discussion. You can either stream or download the audio using the embedded players.

Equalise My Vocals was a panel event and music showcase on gender equality in music happening in May 2017. As part of the project, Coco Solid conducted a series of interviews for The Spinoff, talking to a wide range of women, transgender and non-binary people, within all sectors of New Zealand music. Overall this project was about sharing stories and pooling knowledge and experience, while building a rolodex of resources for music-lovers (of all genders) who might need them in the future.