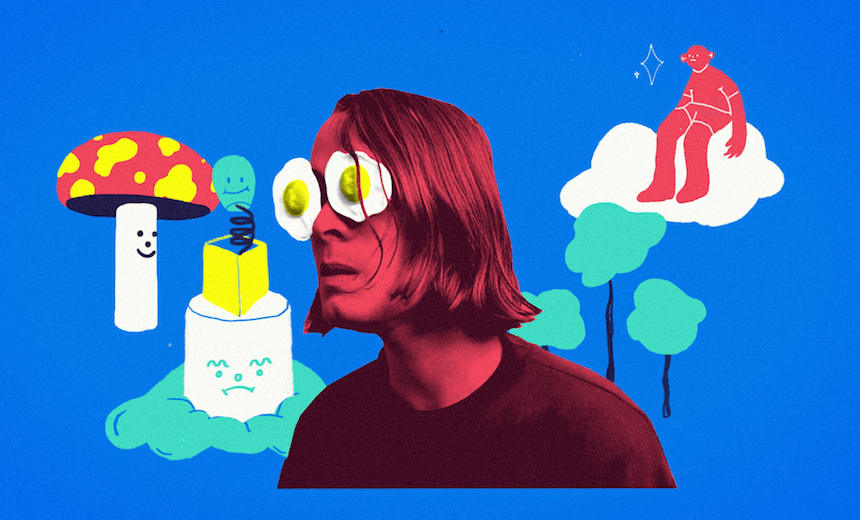 ‘I’m trying not to be a rock band’: Merk on the isolation of laptop production

Henry Oliver talks to bedroom producer and multi-instrumentalist Merk, who is playing at Seamless, an all-ages show, in Auckland this weekend. To win tickets, read till the very end!

So what are you up to at the moment?

I’m just working on new music. I was just in Europe for a couple of months playing for my friend’s band and then I attached a few of my own shows at the end. I was playing for Fazerdaze. I’ve played for her for a couple of years but that was my last tour. Now I’m just focussing on my own project.

Things are going so well for Fazerdaze. Why stop now?

Both projects are just getting busier. Which is sad, but it’s a good problem to have.

So how do you play live?

For those shows, I was just doing a solo thing, just my synth and a drum machine and guitar, but normally I have a band.

So what are you trying to be?

Obviously, there are guitars involved but I just feel like I always want to be making new music, music that’s pushing boundaries, and indie guitar rock music hasn’t done that for ten years, hasn’t done anything really progressive.

It’s an interesting time at the moment where computer technology has allowed people to expand their sonic palate on record but then, when played live, a lot of it gets homogenised into a band format.

Exactly, that’s definitely the problem. I guess I’d see myself as more of a songwriter/producer than much else. That’s where I have the most fun – in my bedroom, in the studio. It’s definitely a challenge bringing it into a live context, trying to make it it’s own thing somehow.

I played all through school, but I got an internship at Roundhead, Neil Finn’s studio, and I worked there for a year, working on projects with the studio and then doing projects for Neil so I learnt a lot of the production side of things from that.

What did you do there?

As you slowly learn you get more responsibility. You start with just being the tea boy. I made Neil and Sharon’s coffee every morning for a year.

Did you get good at it?

I dunno, I don’t drink coffee. But they kept asking for more, so maybe… But as you start learning the ropes, you get more responsibility and get behind the desk and start recording bands and different projects. It was something different everyday.

That whole time I was writing. Because I was the intern, I was the first to arrive and the last to leave. So before the sessions, I would play on the piano and write and then when everyone was gone I’d do some more writing.

So how long were you recording your album Swordfish for?

My memory is blurry about it but I think it was six or eight months. I made like five versions of every song. It took a lot of work. It wasn’t easy by any means, it was a lot of hard work. It was very rewarding but it wasn’t the most fun.

It is. I’ve got friends who make music in the same way so we are aware of each other but it’s not a together thing. It is quite isolating, you’re battling your anxieties every day. The mental hurdle is the hardest bit.

But your music seems so happy and upbeat?

People respond to isolation in different ways. Maybe I had to make upbeat music because it was so isolating. Maybe it’s fake happy. Maybe it’s actually a sad album. I don’t know…

How do you get feedback? One of the things about working in a band or with other producers is that you have people to bounce ideas off.

Exactly, you can shed the bad ideas because you have someone to talk to about it. That’s what I found really hard. You have to trust your gut and you’re always questioning yourself. It’s always good to show people though It’s like hearing it again for the first time, hearing it through their ears. That’s definitely helpful.

So do you have a community of people that you trust and share with?

Yeah. Up until I went to Europe, I had a little recording studio on K’Road and my friend had a recording studio just across the hallway and then we had a bunch of our friends’ bands have rehearsal spaces in the basement. We call it Okie-Dokie Studios – it’s just a little community of friends’ bands and we all share and help each other when we can.

Last year you went to the Red Bull Academy in Montreal. What was that like?

It was so weird. It was surreal but so so cool. It was just really cool to meet people who are similar to me. Everybody there was doing the same thing, thirty of us living together for two weeks. We had hotel rooms 50 metres away from the recording studio which was open any time of day or night plus lectures from amazing people and some of the coolest shows I’ve ever been to.

What did you take away from that experience?

I learnt a lot. It was really cool to really see how small New Zealand is in terms of music. Per capita, compared to the rest of the world, New Zealand music is really good, really high quality, but there’s so much more out there, people doing really progressive and interesting things and none of it comes here.

I didn’t even know about that. The Flying Nun guys nominated me and then I just got tagged in a tweet about it. I didn’t even know if I was invited until the night before so it was just by chance that I was there. So it was a huge honor but a big surprise.

So what’s next for you?

I’m just working hard on music. It’s hard some days and easy other days. So hopefully I’ll get some music out soon, but I’m not trying to rush it.

Do you have people to put your next album out?

There are people interested but it’s just a weird foggy world to navigate so it’s just in the works.

Do you like that side of being a musician?

When I was 17, I moved to Auckland and was playing with a friend who was doing really well and got screwed over by all that industry stuff. Then seeing other people do it, seeing Fazerdaze do it, it’s really good for me to learn from what other people have done, their mistakes and what they’ve done well.

I got some really good advice from [music promoter] Matthew Crawley – he’s my cousin. He said, “avoid the industry as much as possible”, basically meaning do your own thing and don’t worry about all the other stuff because if you do that really well then it’ll come to you. I think that’s good advice so I’m not chasing it. If it’s right, then it’s right. If it doesn’t happen, I’ll still be making albums.

The Spinoff’s music content is brought to you by our friends at Spark. Seamless (also supported by Spark) is on at The Tuning Fork, Friday 18 August. Buy tickets here or email us at info@thespinoff.co.nz and the first ten to ask nicely will receive a free double pass.