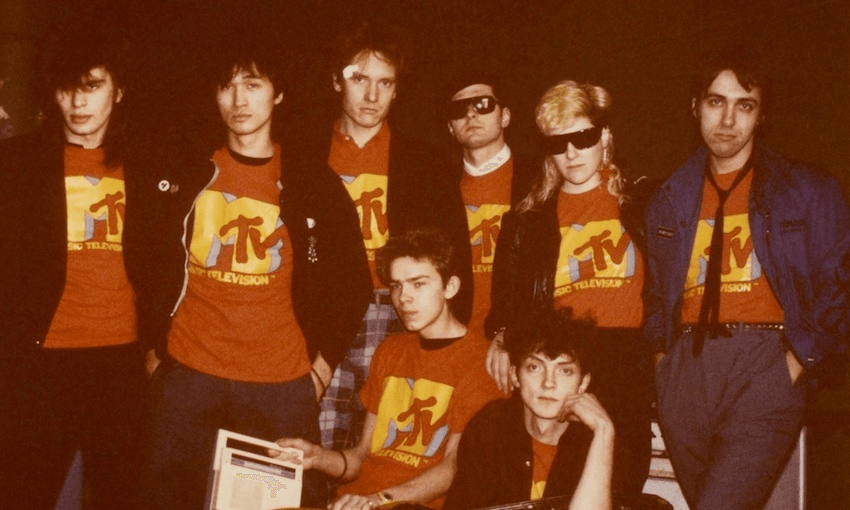 Born in the USSR: A guide to the ‘red wave’ of Soviet rock

Inspired by the screening of Leto at this year’s International Film Festival, Auckland-based Moscovite Anastasia Doniants presents a guide to the first wave of rock from the USSR.

It’s been almost a year since Russia’s acclaimed theatre and film director Kirill Serebrennikov was confined to a house arrest – banned from talking to media, accessing the internet and attending his own film premiere. Serebrennikov was detained on charges of corruption and fraud, accusations his supporters call a politically motivated sham.

Leto – written and directed by Serebrennikov and filmed around the time of his arrest – tells the story of the Leningrad Rock Club, the first legal rock music venue established by the KGB in 1981. Let me take you back there…

In the 1980s, life behind the Iron Curtain was slowly starting to change. Pepsi (the first Western product) was widely available on Soviet shelves, tourists were welcomed and the state could no longer control the underground music scene which was spreading like an infectious disease. This is when some Communist Party genius decided to open a number of rock clubs around the Soviet Union to control and treat the rock mania from within.

For the first time since the early 1930s, the cool kids had a place to socialise openly, but still under the watchful KGB eye.

From song lyrics to clothes, everything had to be pre-approved by the State if bands wanted to perform legally. Some say the Leningrad Rock Club converted young rebellious musicians into good communist citizens, but perhaps these guys just had to work a little harder to find ways of connecting and influencing their audience. Sometimes lyrics would have hidden meanings, but mostly they just spoke about simple pleasures – like being a boy, walking home from a party with a girl. As Viktor Tsoi sings: “As long as you’ve got a pack of cigarettes, life can’t be all that shabby”.

Despite all the effort from the state, products of the Western world somehow always managed to find their way into the USSR. Levi’s, Bowie and Marlboros were increasingly common, but not much Soviet product made the return journey. Some famous “exports” included Stoli, evil KGB movie villains and the nuclear spill from Chernobyl. But Kino, Akvarium, Centre, Zoopark, Alisa, Alyans, Bravo and Strange Games were bands you would never have heard of.

The Russian rock and roll rebellion was deeply underground, even after the establishment of the Rock Club. The West only got a taste of the Soviet sound when an American tourist in Leningrad, Joanna Stingray, smuggled a whole bunch of recordings back to the USA and released a double LP called Red Wave, 4 Underground Bands From The USSR, 1986, getting herself in a lot of trouble with both the KGB and the FBI in the process. She made music videos too, the only music videos to come out from that period in Soviet musical history. They are still available for your viewing pleasure at Joanna Stingray’s Vimeo.

Here’s a taste of the Soviet rock contra-bands, my favourite from the era that the movie Leto was set in.

Known as the Bob Dylan of USSR, Boris Grebenshikov’s character briefly features in Leto. Grebenshikov encouraged his peers to become the generation of janitors and night-watchmen, to find a job which requires the smallest possible input, then to go home and do something creative. Never mind the social ladder, sometimes losing is winning.

A fictionalised version of Mike Naumenko is the lead character in Leto. The Russian Lou Reed, Naumenko managed to find the perfect balance between maintaining a bad boy persona and rubbing the authorities in the right way – a model pupil in the school of rock.

‘Leto’ translated into English means ‘summer’. Serebrennikov’s movie was named after this song, written by Naumenko for Viktor Tsoi. “It’s summertime and I’m fried like a schnitzel”.

Kino was the coolest band in Russia. They had the best clothes, the best instruments and the best looking guitar player. Viktor Tsoi’s name is sacred; he’s a cult figure, a poet, musician, actor and counter-culture hero. His life was cut short at 28.

Where does one begin with Kino? With ‘Ant Colony’ of course! A lyrical comparison of people and ants, sleepwalkers trapped in their little lives and minds. This song is super upbeat – suddenly being an ant seems rather attractive.

To see the band in action watch ‘Changes’, which features in the closing scene of the cult Soviet film ‘Assa’ (1987). Once the titles start to roll, do not hit the stop button – you’re about to be transferred to a live performance. This is the song with the words, “Our hearts demand changes” that the crowds are chanting at the anti-government street protests right now, 30-something years later.

To see Viktor Tsoi dancing is a thing of beauty. Just look at him in ‘Close the Door Behind Me’:

It must have taken a lot of self-control for the audience to be so corpse-like during this electric performance by the A-ha of Moscow. Look out for the modest smiles and an occasional glad eye from the ladies.

Centre were a cult New Wave band from Moscow and ‘Forever’ was a faux propaganda song dedicated to Kalashnikovs, sputniks, blinis, etc. Here they are performing on the Soviet version of Ready To Roll.

The first female star of Soviet rock. In 1984, Aguzarova was arrested by the KGB at her concert; she spent six months at a hard labour camp, aged only 22. In 1991, she moved to Los Angeles and became a cab driver by day, a performer by night. Another American dream turned to borscht. She winds up singing Soviet pop covers at a Russian Restaurant in LA to a crowd who were hungry for dumplings, not Zhanna. Here she is in her heyday.

Perhaps the most political song ever written about the Cold War came from New Zealand. ‘Soviet Snow’ (1987) a forgotten and under-appreciated gem by Shona Laing, a New Zealander who at the time was living in London, socialising with Soviet expats. Laing had a change of heart towards the reds and wrote a beautiful ode to Russia, asking others to follow her lead. She captured the feel of the time; her message is relevant today more than ever. History repeats, once again the world fears Russia, but cold winters do not make cold hearts. “Love is the one solution,” she sings.

Leto is the perfect heart warmer, not just because it means “summer” in English, but also because it reminds us that youth is the same the world over. There were and are like-minded folks in the USSR and Russia.

I’m a Moscovite of Armenian, Russian and Jewish descent living in Auckland. I have strong connections to Leningrad; some of my family perished during the Leningrad Blockade, WWII. I remember my father treating me to a Pepsi once sometime back in the late 80s. ‘Pepsi’ was the coolest word, I thought.

And I reckon now, despite its tough political climate, Russia is again experiencing a creative renaissance. The old Russian soul is back and so many wonderful things are coming out of the country. Movies are playing at the Film Festival, Gosha Rubchinskiy’s clothes are worn by hipsters all over Aotearoa, and bookworms are reading Vodolazkin. They even serve borscht at the Engine Room in Northcote!

I’m going to leave you with something new – my favourite St Petersburg band Shortparis (pronounced ‘Short Paree’) and their out of this world ‘Tutu’.

And a bolshoi thank you to Joanna Stingray, for letting us use photos from her personal collection.