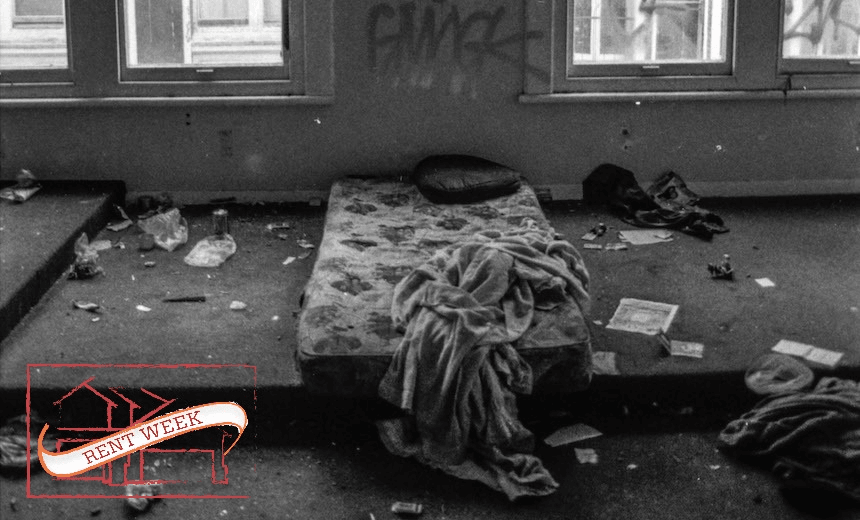 For Rent Week, rapper/poet/writer/drummer Dominic Hoey (aka Tourettes) looks back in wonder at five shitty flats from his misspent youth.

I’m of an age where, if I had my shit together in the ’90s, I could now conceivably own a home. Sometimes on the bus, I drift away in a neoliberal fantasy, where, instead wasting my youth reading Marx and playing in shitty bands, I really knuckled down, saved up and put a deposit on a house.

But the reality is, on the rare occasion I could find a job, my lack of education and experience meant I was getting minimum wage ($10 an hour before tax). I remember working full-time in a kitchen, having hot pans thrown at me, being belittled for not knowing how to make sushi, and walking away with $280 a week for my troubles.

Not only did my wages make the idea of saving up to buy a house laughable, it meant I could only afford to live in the bottom tier of Auckland’s central rental market. While I’m hardly in the lap of luxury today, in the ’90s I found myself living in some real shitholes. So, here’s my top five shitty flats in no particular order.

The ‘Dog Pound’ was named as such because it was an actual former dog pound that had been converted into a flat. And by converted I mean they got rid of the dead dogs and put in an oven. There were still barrels of poison in the back of the building and scratch marks on the walls. It was handed around the punk and hardcore scene until my friends and I eventually got hold of the lease in the mid-’90s.

The flat sat underground and had no natural light. You’d wake up at midday and have to feel your hands across the wall to find the light switch. This lack of sunlight along with malnutrition sent everyone a bit mad. The shower constantly flooded and the toilet leaked meaning you often had to wade through ankle-deep water and sewage to get into the bathroom. One of the flatmates had a BB gun and one drunken night we shot holes in the roof. After that, every time it rained it flooded the living room.

Things reached a new low (or a high depending on your tastes) when one of my flatmates wrapped himself in Gladwrap while my other flatmate shat on him as we were watching the Olympics.

“This looks a fucking toilet block,” my dad said as he helped me move my meager possessions into my new dwelling, a block of units at the bottom of Fourth Ave, nestled next to the motorway in Kingsland.

When we moved in there was a large ugly mat taking up the center of the living room. “Let’s get rid of this,” my flatmate said lifting it up only to discover a giant blood stain underneath. He promptly put the mat down and we never spoke of it again.

One of the neighbors who lived in the unit connected to ours came over to welcome us. “Look mate, don’t go around the side of the house eh, we put some man traps back there,” he said.

“Why?” I asked nervously.

“To catch the assholes that keep breaking in,” he said in a don’t-you-know-anything tone of voice. Every Saturday morning the Christian landlord would turn up and water blast the roof and peer in the windows while we lay in bed hungover and groaning.

In the first couple of weeks, we all lost our keys and couldn’t open the front door. We spent the next six months climbing in and out of the kitchen window until eventually I caught scurvy and had to move out.

A guy I’d met at one of my shows some years previous had a couple of rooms going in a horrible little rathole in town. There was no bond and it was cheap, so my best friend at the time and I moved in. Unbeknownst to us, this guy had become a drug dealer, and there was an endless stream of people in the lounge, buying and doing drugs, having sex and planning various crimes. While everyone was friendly enough, it wasn’t exactly what you wanted to come home to after a hard day’s unemployment.

We moved out when some guy didn’t pay for his drugs and got locked in between the security door and the front door, thus trapping us in the house, while he screamed and kicked the door, pleading to be let out.

When Henry [Spinoff Music editor] asked me to write this article he suggested my old flat on Anzac Ave.

“That’s one of the nicer places I lived in,” I told him.

“There was dried vomit all over the ground,” he said.

“Yeah, but it had windows”.

One of our flatmates did the old ‘not pay rent and don’t tell anyone’ trick. The landlord came around and said we owed him two grand, which of course we didn’t have. As a bizarre compromise, he suggested his mate move into the room vacated by the non-rent paying flatmate. We weren’t really in a position to argue so we reluctantly agreed.

Now, even if the guy who moved in had been our age, into the same things as us (drinking, screaming about socialism and rap music) and someone we’d normally hang out with, this still would have been a weird situation. But he wasn’t any of those things. Instead, he was at least ten years older, constantly wore a silk dressing gown and nothing else around the house, and got upset that the 20-year-old drunks he was living with were acting like dickheads.

With the wisdom of hindsight maybe he had a point, but at the time his complaints were met with indignation: of course we were going to have rap practice in the living room at midnight on a Monday. What did he mean stop throwing shit at cars from the awning? So what if people keep having sex in his bed when he was at work?

I can’t remember what happened in the end, but there was some sort confrontation and we moved out.

Thankfully, I never lived in the flats on Fort Street myself, but you can’t have an article about the shitty accommodation of yesteryear without mentioning the apartment building that sat on the corner of Fort street and Fort Lane.

My friends moved into a tiny three-bedroom apartment on the 3rd floor that stunk of burnt instant noodles. The building was filled with cockroaches and a motley crew of weirdos, goths, punks, sex workers, drug dealers, gang members and graffiti artists. The brothel downstairs played techno remixes of ’80s pop songs on a continuous loop 24 hours a day, which would seep into my dreams whenever I stayed over.

The lift was continually getting stuck and it smelt like every tenant in the building was using it as a toilet. Perhaps not been able to hold on until they got in the lift, someone took a shit on the wall outside the lift. It stayed there for months until the building got renovated and they simply painted over it.

There’s a whole article about the madness that went on in that place; stabbings, fires, home invasions – but I’ll leave that for someone who actually lived there.