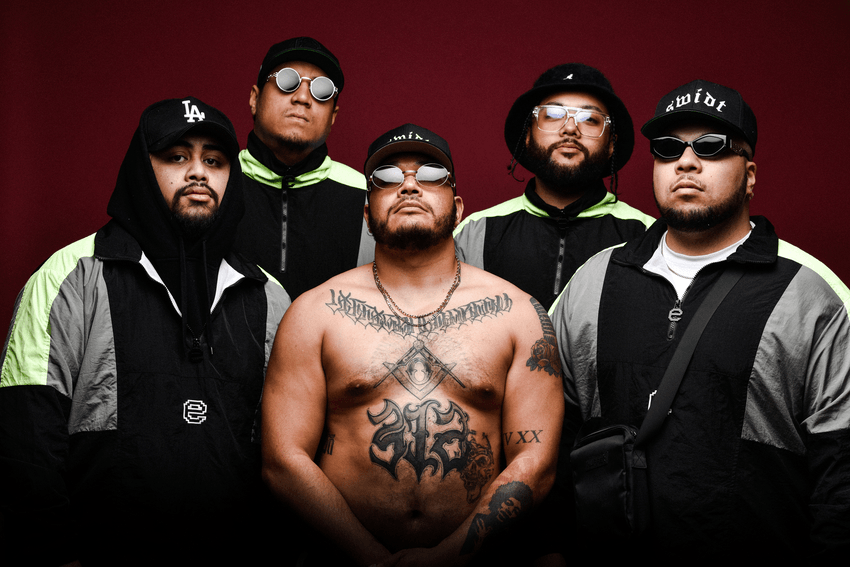 SWIDT, the most electrifying rap group in New Zealand, is now the most political

Onehunga-bred hip hop collective SWIDT have released what might be one of the most politicised music videos in New Zealand history. They talked to Josie Adams about why it felt like the right time.

At just over two minutes long, ‘BUNGA’ is short, but it says more about the Pasifika community than most Palagi will have heard in their lives. It currently sits at nearly 60,000 views on YouTube, an incredible feat only two days post-release.

Samoan actor Chris Alosio stars in the video, moving through the rooms of a family home and punctuating bars about the unique and systemic racism faced by the Pasifika community with the slur “bunga”.

The video was filmed in the only Pasifika-owned home on a wealthy Herne Bay street. If you’re driving by, you’ll recognise it by the flags that line its front. For four generations, a Tongan family has lived here. Throughout the 70s and early 80s, they hid families from the dawn raids.

The Pasifika community is a founding element of modern Kiwi culture, but SWIDT point out we don’t treat them that way.

The final shot of the video has Alosio dressed in Polynesian Panther garb, holding a child, speaking past two faceless police officers. It’s to the point: during the dawn raids, the government wilfully fucked over the Pasifika community by deporting visa overstayers in the small hours of the morning, tearing apart families they’d brought over for labour as soon as they weren’t needed anymore.

The award-winning SWIDT have always written about singular personal experiences: their childhoods, Onehunga, masculinity. With ‘BUNGA’, they’ve written a full history. All five members of the collective – SPYCC, SmokeyGotBeatz, INF, Boomer Tha God, and JAMAL – sat down to talk about it.

That last shot, with the dawn raids symbolism and Polynesian Panther outfit, was so powerful. Has that period of time been on your minds lately?

SPYCC: Obviously it’s been on our minds, and in our hearts, our whole entire lives. How it came about was organic and natural. In terms of creativity, sometimes there are blocks, but on that track everything flowed and came together. It was easy. I guess it was just time.

The dawn raids would have been in your parents’ lifetime, right? Are those events still shaping your community now?

SPYCC: Yeah, definitely. The way that different generations live in New Zealand is a result of those times. And the attitude toward the Pasifika community as well.

The Single Object: a mighty pen

With [upcoming single] ‘Preacher Man’, and with ‘Conqueror’ as well, you style yourselves as spokespeople for the community. Do you see that as a burden, or do you enjoy it?

SPYCC: I feel like it’s something we want to talk about. It’s not like we feel obligated, it’s just something that’s pressing on our hearts, and we’re artists.

Boomer Tha God: When we’re coming up with songs and stuff, it’s not like ‘what do we need to talk about?’ We just create.

You’ve always had political elements in your songs, but they’ve been couched in storytelling or sick beats, so this felt really on the nose – you really went for it. Why did you decide to do that?

SPYCC: I feel like it’s such a sensitive topic, it should be confronting. It should challenge people, their perspectives, their ideologies. It should feel like it’s one-on-one when you listen to it. Like someone is talking directly to you.

Is that why you had Chris look directly into the camera?

SPYCC: That was all credit to Anahera [Parata], our director.

With Aaradhna rejecting her Tui award, and Taika Waititi saying New Zealand is ‘racist as fuck,’ do you feel more comfortable talking about this so explicitly?

SPYCC: It’s not so much uncharted area. They’ve already gone there with their own experience and perspective on it. So it’s easier for us to come and do what we did.

I noticed ‘Bunga’ isn’t on Spotify. What’s up with that?

SPYCC: I feel like it’s not a song to just play. It’s a visual piece.

JAMAL, you’ve done some music workshops with the 312 Hub in Onehunga. Do you see it as a community service that you’re offering?

JAMAL: Hard. I’ve been doing it for a while, and worked with a few other youth groups. I do it for the culture, and the youth – to show them there’s a platform that works for them. It’s good that the success we get is something they see, and they know it’s not impossible.

Are all of you still very involved in the Onehunga community? Do you still live there?

SmokeyGotBeatz: I do. These guys aren’t loyal.

JAMAL: That’s the thing though, eh? It started in Grey Lynn, and it pushed further and further.

That happened fast, too.

Are you guys gonna have to find a new suburb to rep?

What do you guys see as the next community you speak for? Onehunga, Pasifka, now all of Auckland – you’re expanding your spokesmanship.

INF: We probably already speak for New Zealand right now. There’s people who look to us at that level, and shout out to them. I guess you never really know, when you’re in that creative process and putting music out. You experience new things and then you speak about those, and who knows how many people have shared those experiences on a national or an international level. It’s just a feeling, really.

JAMAL: I see it as growth of the artist. For us, when we made our first album, a lot of it was based on our childhood. Then it moved to current stuff, and now it’s more political – but it’s not like we’re doing it on purpose, we’re just growing as people and as artists. You learn things every day. Things affect you differently one year than they did ten years ago.

The ‘BUNGA’ music video is out now, and ‘Preacher Man’ will be released on Friday November 1st. You can catch SWIDT performing at Rhythm & Vines this summer.

This piece was made with support from NZ on Air.