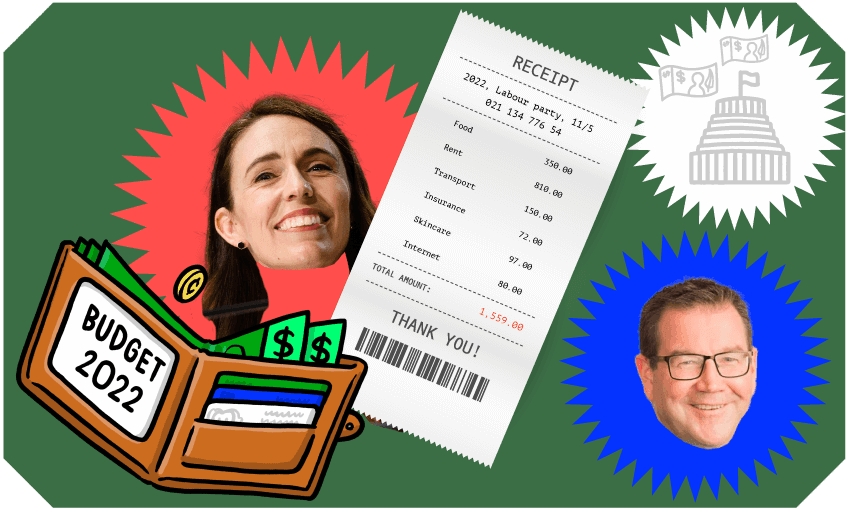 By Clint Smith
Guest writer
Made possible by

Budget 2022: This government has shown it can quickly shift tack to deal with the unexpected. To have any chance of regaining the upper hand from the opposition, it must draw on that experience to come up with some bold, clear policy.

In August last year, when finance minister Grant Robertson and other senior ministers sat down to begin planning this year’s budget, things were very different than they are today.

Delta had just arrived in New Zealand, but vaccines were coming, too. Treasury and the Reserve Bank were projecting that, by mid-2022, the economy would be returning to normal, and the government finances were improving. Inflation had ticked up above 3%, but the Reserve Bank projected it would peak at a reasonable 4.1% in December before easing off.

With those projections in hand, Covid under control, and with the opposition an irrelevancy under Judith Collins, the government could turn its focus to long-term issues. Health, including clearing the DHBs’ debt, and climate change would be the priorities.

What a difference 10 months make. Inflation is now nearly 7%. Cost of living, which had been a relatively minor issue for voters in 2021, according to the Ipsos Issues Monitor, is now far and away the dominant issue. And, whereas voters rated Labour best to deal with cost-of-living last year (42% vs 25%), they now think National is better (36% vs 29%).

It’s pretty clear that this turn, both in facts on the ground and voter opinion, caught Labour by surprise as they focused on the delta, then omicron, outbreaks. The prime minister, Jacinda Ardern initially refused to label it a crisis when asked. This risked making herself look out of touch and undermining her core attribute – her empathy.

National, however, had seen the political possibilities early. Late last year, they were already talking up the cost of living as an issue. Although they have yet to present any solutions that would lower inflation and have actively opposed measures to increase incomes, being in tune with the public (and having a credible leader) has seen National regain centre-right voters who voted for Labour in 2020, to the point the parties are neck and neck.

Having been in Covid response mode for two years, Labour switched its political radar back on in March, moving quickly to cut excise on fuel and public transport costs, and packaging the (either already announced or automatic) April 1 income boosts as a cost-of-living package. These moves may have arrested Labour’s polling slide, but the Newshub poll has shown voters overwhelmingly want more from them.

It doesn’t matter that record low unemployment and rapidly rising wages mean that the workers’ total weekly wage packet is up 10.5% compared to a year ago. The 6.9% inflation is more evident – we see those higher prices, we feel them, and we turn to the government to fix the problem.

The budget is an opportunity for Labour to seize back the narrative on cost of living, with some bold, clear policy. But will they?

Usually, major decisions on the budget are taken early in the year and it is all but locked in by late March. But this government has experience in quickly shifting tack to deal with the unexpected. In 2020, they had to throw out the budget they had worked on for half a year and write a new one to confront Covid and reignite the economy.

Now, you might think this is a simple decision: politicians are cynical, they’ll do what it takes to win votes. Well, part of my job for Labour in opposition was trying to get our policies to not only be good but also be popular. You would be surprised how little the popularity of policies entered discussion. More often, it was a case of MPs deciding “this is the policy we think will do good” and as an after-thought, “can we get someone to work out how to communicate this?” Which is very principled, but it’s no surprise Labour had so many policy disasters that ended up costing them votes.

All of which is to say, Labour will not easily give up on doing all the investments they think are important – like the money for tackling domestic violence and police, the extra funding for apprenticeships, and replacing coal boilers in schools. By the time they’ve done those investments and invested over $3 billion in health and education just to keep up with costs, there’s not going to be a lot left for a cost-of-living policy. Big-ticket items like taking GST off food ($3bn a year) are off the table.

Fortunately, the buoyant economy is producing more tax than expected for the government. It might not last, so Labour couldn’t use this windfall for new permanent spending increases or tax cuts, but right now, its deficit is $4bn less than expected – that gives them options.

There’s plenty Labour could do – cheap dental visits, free public transport, tax cuts. The problem with all of these, apart from the fact they’re ongoing costs and the extra money is one-off, is that they risk just disappearing from public awareness. Seeing that my bus trip now only costs 87c is nice but it doesn’t feel like major government action. Most people couldn’t tell you their net pay accurately enough to notice a few dollars a week in tax cuts.

No, if I was still advising Labour, I would be looking at the success of the wage subsidy for inspiration. Quick and easy to implement, money in the pocket gives people confidence, and lets them choose to use it on the cost pressures most affecting their families.

A $250 a month cost-of-living payment to the three-quarters of households on under $12,500 a month would be a nice, visible boost. It would be progressive, because it would make the most difference to low-income families, but it also reaches middle-income families who decide elections without giving anything to high-income households. It’s also simple for voters to understand and people would notice receiving the money. At a cheeky $300m a month, the government could run it through the rest of the year with the tax windfall it’s had in recent months. (Would it be inflationary? Maybe a little, but it’s a minor bump in the $10bn a month of retail sales, and the income boost would outweigh any inflation, particularly for low-income families.)

I’m not expecting anything so out of left-field from the budget. For starters, Treasury would have kittens. And Labour’s thinking was probably already too locked in to develop something in time for the budget close-off.

But, if they don’t regain the initiative at the budget, they’ll have to act soon after and roll out a series of cost-of-living policies. Labour cannot remain on the back foot on the major issue of the day for long, letting National continue to chip away at them.

Cost of living was not the battle Labour wanted to be fighting right now. They want to be focused on health and climate change. But if there’s one thing Jacinda Ardern’s prime ministership has proved, it’s that governing isn’t just about fulfilling your plans, it’s also about dealing with crises as they emerge. If Labour wants to enter 2023 in an election-winning position, they need to show voters they are on their side by tackling the cost-of-living crisis head-on, and soon.

Clint Smith was a policy and communications adviser to the Labour and Green parties, working on three alternative budgets, and the 2018 budget. He now runs Victor Strategy and Communications.

Does the risk of HIV still justify the effective ban on donations from sexually active gay men?
By Tony Sriamporn
Guest writer
Opinion
10th May, 2022

It's hard for a Speaker to be seen as truly independent when everyone knows which MPs voted for him.
By Graeme Edgeler
Guest writer
Opinion
6th May, 2022

If I bought a scented candle from you a year ago, please don’t take that as an opening to remind me my mother is dead.
By Sam Brooks
Staff feature writer
Opinion
6th May, 2022

The ‘Eurasian fluff’ CEO has already lost $60m. Here’s how he might lose far more

His misogynist comments are far from the first time Simon Henry has behaved repulsively.
By Duncan Greive
CEO / Publisher