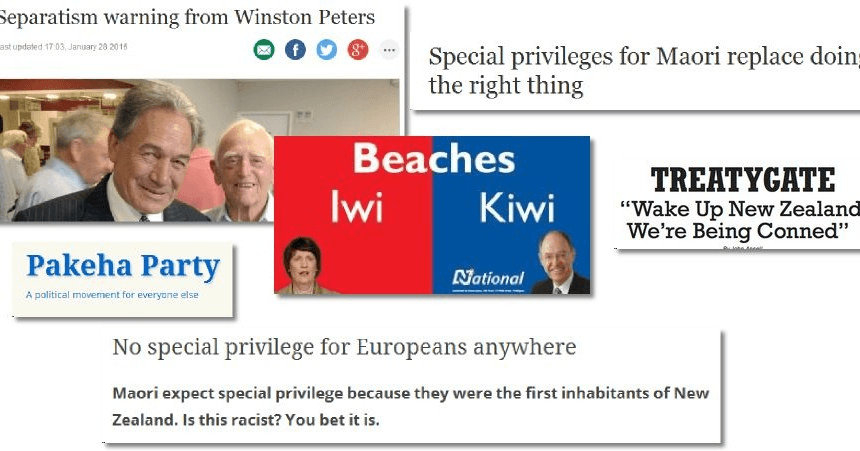 By Luke Tipoki
Guest writer
Made possible by

Opinion: If we are ever to properly grow up as a nation, New Zealanders must make up their minds – do they want us as Māori to lift ourselves up and compete alongside Pākehā or stick to being jolly subordinates?

Just when you think we might have gotten over it, it returns to the surface, like a bad itch that needs scratching: the idea that Māori are the benefactors of special privileges.

That this “special privilege” rhetoric endures is a bit of an anomaly. It is now 12 years since Don Brash used his state of the nation speech at Orewa to single out Māori. However, every few years the rhetoric returns and today it is as strong as ever.

In 2012 it was questions over water rights and ownership. In 2013 it was the discussion surrounding the“Pākehā Party” Facebook page. This year it was Winston Peters’ state of the nation address and a question in the TVNZ Kiwimeter survey that triggered its return.

This rhetoric has become institutionalised owing to continued misunderstandings surrounding things like Treaty of Waitangi settlements and reserved seats in Parliament for Māori. These are often given as examples of special treatment without any real understanding of how they operate or why they exist, such as treaty settlements only being worth 2% of the actual value of claims, and the fact that Māori electoral seats were used for over 100 years as a means to limit Māori political influence and participation.

One of the reasons this subject keeps rearing its ugly head is that so much of middle NZ is unable to accept its indigenous people achieving financial success. They link this supposed special privilege to Māori achievement and believe the only way we can succeed is through having an unfair advantage. It is as if they don’t want us to succeed and they use special privilege as a proxy for a deeper resentment at the idea of Māori excelling.

For years we lived under the illusion that New Zealand had the best race relations in the world, that Māori and Pākehā coexisted happily in a bicultural nation. The reality was that we were two ethnicities living in a mono-cultural society, where Pākehā were the dominant culture.

The ravages of colonisation had left Māori as a subjugated people. We had lost our confidence and we were by and large accepting of our place as second tier to Pākehā.

It was Pākehā who were happy with race relations in NZ, where they got to play the leading act while Māori played no more than a supporting role. While Pākehā got to be the employer and the captain, Māori were only allowed to be the joker, the one who played the guitar at parties, and the one who played on the wing for the local rugby club. We were the workers, not the boss.

My father was the embodiment of that Māori. He was the life of the party and got invited to them all. He would play the guitar and had a singing voice like Howard Morrison. He played on the wing for both the local rugby club and his provincial side. Then he and my mother managed to scrape up enough cash to get a loan and buy a small sheep farm.

Dad was no longer invited to all the parties. He couldn’t be the joker any more, he wasn’t there to play the guitar, and couldn’t find solace and acceptance as his team’s flying winger. He had the audacity to no longer accept his place as the subjugated farm worker; he was trying to compete with Pākehā, and he was succeeding.

When Māori do succeed in the Pākehā world, that success is often accompanied by questions. Questions like: did you get a government handout? Did you pay for your education? Did you get that as part of a treaty settlement? In my father’s case the questions were: is the bank giving you a lower interest rate? Are you paying less tax? As if it were not enough for Māori to achieve success, we also have to prove that we’ve earned it.

People who should have been his peers seemed unable to accept that this brown man had succeeded in their world. There were also rumours of a more sinister nature: that he had stolen hundreds of sheep from his former employer and used them to fund the purchase of his farm.

Thirty years on and this rumour survives, along with other accusations of stock rustlings and illegal dealings. It was beyond the pale that a Māori man had not only managed to foot it with Pākehā, but had actually overtaken many of them.

If New Zealand is to ever shake the special privilege debate it needs to make up its mind: does it want us as Māori to lift ourselves up and compete alongside Pākehā – to be equals – or is it still more comfortable with us being the joker, the guitar player, the flying winger or the gang member. If New Zealand can’t come to terms with Māori competing as equals, then we will continue to have this conversation again and again, repeatedly stalling any serious attempt to move forward and gain full maturity as a nation.