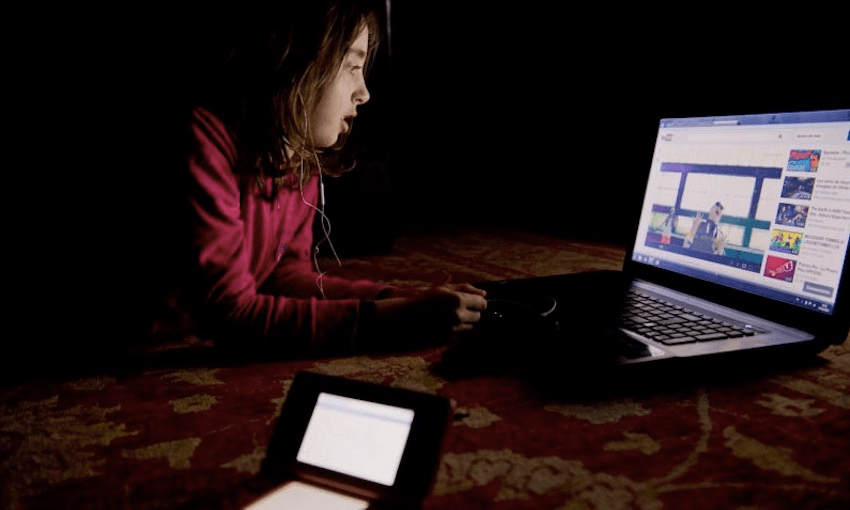 Emily Writes: I survived a week without YouTube Kids

YouTube has been in the news a lot in the last few weeks and parents around the world are considering whether they should allow their kids to watch. Emily Writes decided it was time to give it up.

Hi, my name is Emily Writes and I’ve been one week without YouTube Kids.

This has been an incredibly difficult time and I’d like to thank you for your support.

Like many parents, I decided I probably couldn’t keep letting my kids watch YouTube given it somehow seems full of videos of Peppa Pig being boiled alive and the Paw Patrol Pups having sex with each other. This divorce from my co-parent has been painful and it has not been amicable.

When I had my first child we didn’t have a TV until he was two. Then we had a second child and realised we had to have a TV. And now, four years on, my oldest tells me to like and subcribe after cleaning his room.

It’s impossible to keep up with – there are grown adult humans who make videos of paw patrol toys playing. My kids love it, they’re addicted.

There’s apparently Momo though I haven’t seen her. More troubling is that there’s millions of videos of people playing Minecraft and that’s it – they’re just playing Minecraft. My kids don’t even play Minecraft but they will watch other people play it. If they had their way they’d only watch this.

I knew it was time to consciously uncouple with YouTube when my son asked to watch a six hour loop of Daddy Finger. Surely this content was going to fuck him up in some way.

We deleted the app. Put up a block on the laptop permanently attached to our TV. The end was beginning.

Day One: It’s fine. We have Netflix and Lightbox and Neon and the Nick app. How hard can it be? Also, we have controls in place, the kids can only watch screens 23 hours a day. Everything in moderation. This won’t be that hard.

Day One, five minutes later: Gently explained to children that there’s no toy reviews on any of the 1000 streaming channels we subscribe to. Currently waiting for Fire Service to finish putting out small inferno children started protesting this fact.

End of Day One: Well, that wasn’t pleasant but it’s got to get easier right? We are all going cold turkey. It’s going to take some adjustment but we will get there.

Day Two: Child has used Siri to get into YouTube despite the block by saying “SIRI GIVE ME TOY REVIEWS” I don’t know whether to be impressed or horrified. I’m improrrified.

Day Two, afternoon: Children are refusing to talk to me and this is an unintended bright spot on what has been such a difficult 15 days. What? It’s fucking TUESDAY? What the actual fuck.

End of Day Two: Leaning heavily on Audible right now. Have allowed children to listen to 15 hours today. Thank god there’s 160,000 of those bloody treehouse books out there.

Day Three: It’s a new day! We are going to do this!

Day Three five minutes later: Everyone is crying. The cat has moved out.

Day Three, lunchtime: School has YouTube. It’s not possible to get away from it. It’s like a Black Mirror episode except you’re stuck in a MineCraft tutorial and it’s all being narrated by Ryan’s god damn mother fucking dad.

Day Three, dinner: Without YouTube Kids days are not 24 hours they are 850 hours long. They go on forever and you have to talk to your kids. Do you know how inane their conversations are?

To be fair on the kids we are not watching Youtube either.

End of Day Three: Everyone falls asleep at 8pm exhausted from having to interact with each other so incessantly.

Day Four: Remind myself why we have banned YouTube by reading terrifying articles about Momo and zombie Peppa Pig videos that may ruin my child by turning them into a Young Nat or something.

Day Four, lunchtime: Unexpected hiccup that we cannot play the Bohemian Rhapsody video clip as a reward for the sticker chart. Realise this is actually a reward for us because since having children we have heard this song 900 trillion times and now hate it with the fire of a thousand suns.

End of Day Four: HAVE I HAD SOME WINES? SURE OK SURE I DID. SURE I HAVE. GO AHEAD AM JUDGE ME. BE A JURY AT ME. I DONE NIT KNOW IT WOULD BE THIS HARD.

Day Five: Could we maybe just have YouTube Kids sometimes? Is that an option? We are at the bargaining stage of the cycle of grief and have a spirited discussion that ends with NO YOU CALM DOWN.

Day Five, lunchtime: Eat all of my feelings, have gained 10kg this week.

End of Day Five: LOOK DID I MIX VODKA TRAMADOL VALIUM LORAZAPAM AND THREE SLEEPING PILLS IN A BLENDER YEAH MAYBE WHAT IS IT TO YOU WE ARE ALL TRYING TO DO OUR BEST CAROL OK.

Day Six The kids wake and go outside for the first time in a year. They squint at the sky and ask “what is it?”

Day Six, afternoon: Tell every person we know with a child that we don’t use screens.

Day Seven: Read out loud to each other studies that say we are great parents for not letting our kids watch screens.

Day Seven, lunchtime: Tell the police officer that arrests us for drunk and disorderly behaviour that the guy who made Apple didn’t let his kids use iPads which makes you think doesn’t it.

Day Seven, evening: Released on bail to find kids watching Youtube Kids. We have been replaced. We are free.