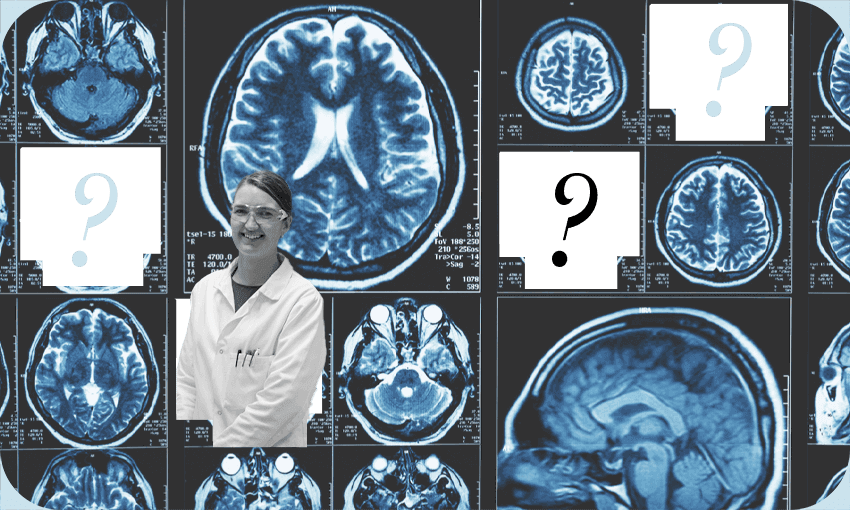 Earlier dementia detection could change lives. Can this NZ study unlock the secret?

Signs of dementia can be treated if they’re found early enough, but early detection is not often the reality for dementia patients. A New Zealand doctor is trying to change that with her world-first study.

Although it’s sometimes been easy to consider medicine as an established, known field, in reality it’s a dramatically fluid one. At times the perpetual motion of medical research is highly visible – the rapid development and distribution of RNA vaccines during the Covid-19 pandemic, for example – but more often it manifests in work which, while crucial, is rarely seen by the eyes of laypeople.

One researcher doing crucial work in that latter space is Dr Brigid Ryan, chair of the Younger Onset Dementia Aotearoa Trust and leader of the New Zealand Genetic Frontotemporal Dementia Study. Dr Ryan’s work could well change the way we think about, talk about and treat dementia, and it’s facilitated in large part by organisations like the Auckland Medical Research Foundation. We asked her to explain what the study is doing, what it’s learning and why it matters.

The Spinoff: When we talk about dementia, it’s generally with a degree of resignation – we’re so used to thinking about this process as immutable and unstoppable, that our plans tend to focus on management rather than mitigation. But is intervention – and prevention – possible?

Dr Brigid Ryan: Imagine your doctor says you have dementia and that it will progressively deprive you of your ability to think, your personality, and your independence.  And they tell you it could have been treated if it was diagnosed 10 years earlier, but the damage to your brain now is too extensive.

I’m leading a research project investigating the potential to identify dementia years or decades before clinical diagnosis, with the hope that early intervention is possible – that potential treatments which come along or which already exist could be trialled in those people. Treatments have been tested on humans and failed in the past, but it’s possible that we’re just giving them too late in the disease’s progression. If we were able to give that treatment 10 or 20 years earlier, then the results might be different.

What does that kind of work actually entail? How do you identify someone at risk of developing dementia, and what can you actually do once you know?

We are incredibly fortunate to be working on the world’s first study with long-term access to a New Zealand family, the majority of whom live in Auckland, with a rare form of early-onset dementia that manifests as young as in their 40s.

The mother was aware that dementia ran in her family; her father and four of her six siblings had it. She wanted to help future generations, so when she passed away her brain went to the Centre for Brain Research.

Genetic research revealed her children have a 50/50 chance of frontotemporal dementia (FTD). The main thing that differentiates FTD from Alzheimer’s is that the initial symptom isn’t to do with memory. It’s either a change in your personality, your behaviour or sometimes your language ability. And because it has an onset under the age of 65, it’s a really different experience to someone who develops Alzheimer’s later. It is all so much more affecting for these people, because they’re still bringing up children, and still have jobs. It has a profound impact on them.

There are more than 25 children in the next generation of that family, with another two generations below them. We have been able to identify who will develop dementia – those who are perfectly healthy today, that we know in 10, 20 or 30 years are definitely going to develop dementia – and we’re trying to find a way to determine who is in the very early stages of dementia before they have any clinical symptoms. Ultimately, we hope to develop screening tests that can be used in the general population so that we can identify and treat dementia at this very early stage, before symptoms develop.

The work with this family is internationally important, as very few other researchers in the world have had long-term access to families with these gene mutations. Instead they’ve had to work with smaller groups of unrelated people. We are part of a network of similar studies all over the world, working together to identify dementia early. Many other researchers are developing treatments that may be useful at this early time-point, so both of these types of research are critical.

Have you made any significant breakthroughs so far? What have those been, and what have they allowed in terms of steering ongoing research?

I started this research in 2016 and the family were all recruited into the study by 2018, so we’ve amassed three years’ worth of data at this point. What we’ve asked of them is not insignificant – they’ll each spend up to two days having assessments – but it’s that commitment which has made a huge difference to the study.

We have some very preliminary data that suggests over a two-year timeframe we can see changes in the sense of smell happening quite early. Which is really interesting for us because it fits well with the data on other neurodegenerative diseases, especially Parkinson’s disease, that it can be something that’s changing quite early. We’re also seeing evidence of early cognitive changes, which is in line with what some other similar cohorts of FTD gene carriers in the UK have already reported, so it’s really encouraging for us to be seeing similar results. It could indicate some sort of signature – including potentially sense of smell – and could possibly mean that these changes could be an early indicator of dementia, potentially decades before symptoms are expected to arise. If this same signature is detectable in the general population, it may be possible to detect these changes early and intervene to prevent dementia symptoms from developing.

Because we’re interested in the sense of smell, we wanted to extend it to other sensory systems. So we are going to do a test of hearing and balance in the cohort, and now that we can be back in the lab we’re also going straight into RNA sequencing the blood samples to look at any changes that we can pick up there.

How is your work sustained? What does it need to continue? And what role does the AMRF play in that?

The youngest family member in this study started when they were 25. So it’s possible that that’s a little bit too early to see these changes happening, but we know the sooner we identify it the better. That’s why it’s really important to do this over the long term. The hope is that we can keep this study going for as long as possible, however the longevity of the project relies heavily on funding. I spend approximately half my time in the lab here at the University of Auckland, the other half involves coordinating the team and applying for more research funding.

The Auckland Medical Research Foundation is funding my postdoctoral fellowship – and their support is really vital. AMRF has invested more than $84 million into a wide range of medical research since it was established in 1955, and an endowment funds AMRF’s administration costs, meaning 100% of any donations go directly to research.

Really, for researchers like me, what the Foundation provides is more than just funding. They’re providing hope for the future – hope that we can continue to do this work, and that we can change lives by doing it.

This content was created in paid partnership with the Auckland Medical Research Foundation.