In a historic corner of Dunedin, startup culture is thriving. Catherine McGregor visited the city’s Warehouse Precinct to meet the people driving the movement.

When Jason and Kate Lindsey bought the four storey building now known as Petridish, it was an absolute wreck. Once home to a thriving hat and textiles factory – a 1919 newspaper story spoke admiringly of a room containing “100 Singer machines, electrically driven” – the Stafford St building was both empty and decrepit when the Lindseys took the risk of their lives in 2015 and bought the entire thing.

The original idea, post-renovation, was for corporates to lease half or whole floors, but an early tenant put paid to that plan. “We had a gym up there with a wooden floor and every time I’d bring a potential tenant in, they’d be throwing medicine balls on the floor and I thought ‘this is never happening’,” says Jason, a California transplant who gave up a career in film production for a new one as a commercial landlord. Desperate, he decided to fit out half an office as a co-working space, “just so people could see what I see in the building”. It was full by the end of the week.

Since then, Petridish has gone from strength to strength. The building now boasts 55 desks, 14 offices, three meeting rooms, an event space and ground floor cafe, with work well underway on  The Inventors Lab, a Provincial Growth Fund-supported prototyping workshop for hardware and gadget startups.

Petridish is a co-working space that challenges the idea that co-working spaces are just for freelancers and startups. “We have businesses at all stages here, says Jason. “The nice thing is that you always have someone a bit further up than you who you can ask for advice, or learn from their experience.”

Whatever their size, the businesses that gravitate to Petridish value its supportive environment as much as they do the heritage interiors and harbour views. It’s the relationships that make the space, says community member Angela Howell, whose “social networking for home lovers” app Timbr launched last year.

“There’s just so much support. When we were starting out, so many gave their time freely to thrash around ideas or to help us with user testing – just the generosity of spirit was extraordinary,” she says.

“I could have done it elsewhere, but it would have been much harder and would have cost a lot more. You really feel the love here.” Kate and Jason Lindsey, and the interior of Petridish (Image: supplied).

Like the lab equipment which inspired its name, Petridish is a small but vital testing ground in Dunedin’s rapidly expanding business ecosystem. From student startups to global enterprises, the city’s business sector has an energy and ambition that belies its size. Just look at some of the companies started here, and that still call Dunedin home. There’s Pocketsmith, the personal financial software with a 191-country user base; the internationally successful CodeLingo, which scans code for errors and automatically corrects them; data analysis outfit ADInstruments; online learning toolkit Education Perfect; and Sir Ian Taylor’s pioneering computer animation firm Animation Research, among many others.

It doesn’t take a business analyst to spot what all these companies have in common. Here in New Zealand’s original Gigatown, the future belongs to tech. That belief was reinforced by the announcement in 2019 that Dunedin would be the country’s Centre for Digital Excellence (CODE) – an ambitious government-backed project aimed at creating a $1 billion game industry in the next 10 years.

British-born Tim Ponting is CODE’s establishment director. A former journalist and PR with more than three decades in the games industry, he’s learned from experience that CODE needs to be about far more than just funding small-scale startups.

“In the games business, one of the key predictors of failure with government interventions around the world is when they focus on one specific area. They’ll put money for example into the construction of prototypes, and then they’ll leave it to the market to deliver commercial success.

“But in places where they’ve been egregiously successful, like Finland, one of the reasons they’ve been so successful is because they support businesses at each stage of their development. We’re replicating that with our funding model.”

It’s all about creating an ecosystem that’s not only successful in the short term, but sustainable for decades to come, he says.

“You can invest a lot of money attracting talent to a city but you can’t make it stay, necessarily. It’s a much better idea to develop our own IP, our own skills base, and companies comprised of people who love being here – that’s a much better recipe for long term success.” 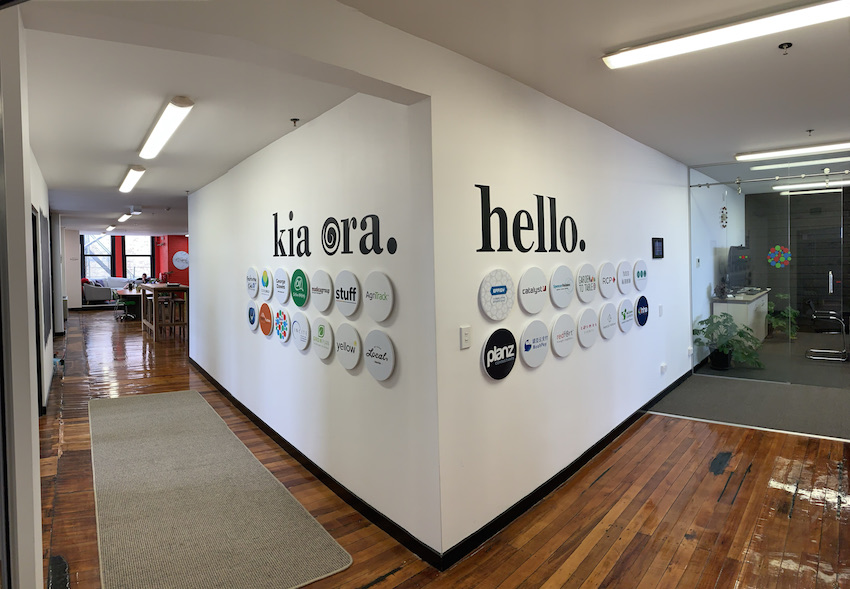 Just as with Petridish, where Ponting keeps his office, the ethos behind CODE is one of collaboration and mutually beneficial support. Having worked all over the world, he says he’s found Dunedin uniquely conducive to entrepreneurialism.

“As a foreigner, one of the things that struck me about Dunedin is the complete lack of fear that people have. People push themselves out of their comfort zones really freely in this city and there’s a real hunger to innovate.”

Rachel Butler, general manager of Startup Dunedin, says the city’s population size – 134,100 plus another 30,000 or so students during the academic year – is key to its small-business success. “We’re big enough that we have diversity of thought and infrastructure in Dunedin, but small enough that we know everyone’s first names and who is doing what. I think we’re incredibly lucky with that.”

With a mission to make Dunedin one of the world’s most entrepreneurial small cities, Startup Dunedin is a one-stop resource shop for anyone with a great idea and a dream to turn it into a reality. Funded by the council, Otago Polytechnic and the University of Otago, Startup Dunedin runs Co.Starters, a nine-week support programme for nascent businesses, and Audacious, an annual student startup contest.

Butler says the organisation is about helping “anyone and everyone” who lives in Dunedin and has a business dream. “You can have a thought in the shower this morning and you can come talk to us, or [as an established company], ask us ‘Hey, how do I tap into the Japanese market?’

“Making it as inclusive and open as possible is hugely important.” Startup Dunedin has a co-working space of its own, The Distiller, for people on one of its programmes. The Distiller is located on the university campus in North Dunedin, making it a geographic outlier in a city where the entrepreneurial community congregates on the other side of the Octagon. At the southern end of the CBD, the Warehouse Precinct has become a startup hotspot, as innovative businesses move into the area’s beautiful buildings, helping to bring Dunedin’s historic commercial district back to life.

Heidi Renata is the owner of one of them. In 2016, she and her brother Steven leased a warehouse building in Vogel St, and opened a unique co-working space they christened INNOV8HQ. Renata, who is Ngāpuhi but born in Otago, calls it “Aotearoa’s first business marae”, and all aspects of its operations are based on kaupapa Maori values. While INNOV8HQ started out as a co-working space, that was only scratching the surface of what they wanted to accomplish. In October 2020, they relocated to another stunning heritage building in the city and expanded their operations to advisory, consultancy and mentoring, serving organisations and indigenous startups all over Aotearoa and around the world.

“We weren’t just about real estate. For us it’s about celebrating our culture’s uniqueness alongside the global networks that we work with and bring to the ecosystem,” says Heidi. In practice, that means providing ambitious rangatahi and young companies, Māori or Pākehā, the support and ‘real world experience’ they need to succeed. Helping entrepreneurs reach their dreams is something Heidi is passionate about, and she says Dunedin has been the ideal place to do it.

“I grew up here, but I was away for 13 years – in the UK, Europe and Australia, and then Auckland – and then I came back and I just felt it was an unopened gift here,” she says.

“We’re very modest people in Dunedin so people tend to do awesome things behind doors. We don’t get to see it. You go into buildings around here – I didn’t even know half of these buildings and spaces existed – and you walk in and there’s all these awesome things happening.”

Awesome things, boosted and accelerated by people who care deeply about the potential of New Zealand’s southern city. People like Jason and Kate at Petridish, and Heidi and Steven at Innov8HQ, who are playing an essential role in Dunedin’s entrepreneurial success.

“Obviously their business is about making a living, but they’re also passionate about creating companies – about making connections as well as taking risks,” says Tim Ponting about Petridish.

“In some cities, you walk into the building and you have the sensation that it’s a privilege to rent the space at some exorbitant price. But it’s a very different vibe here. It’s very Dunedin.

“I mean, what’s not to love about this city to run a business in?”